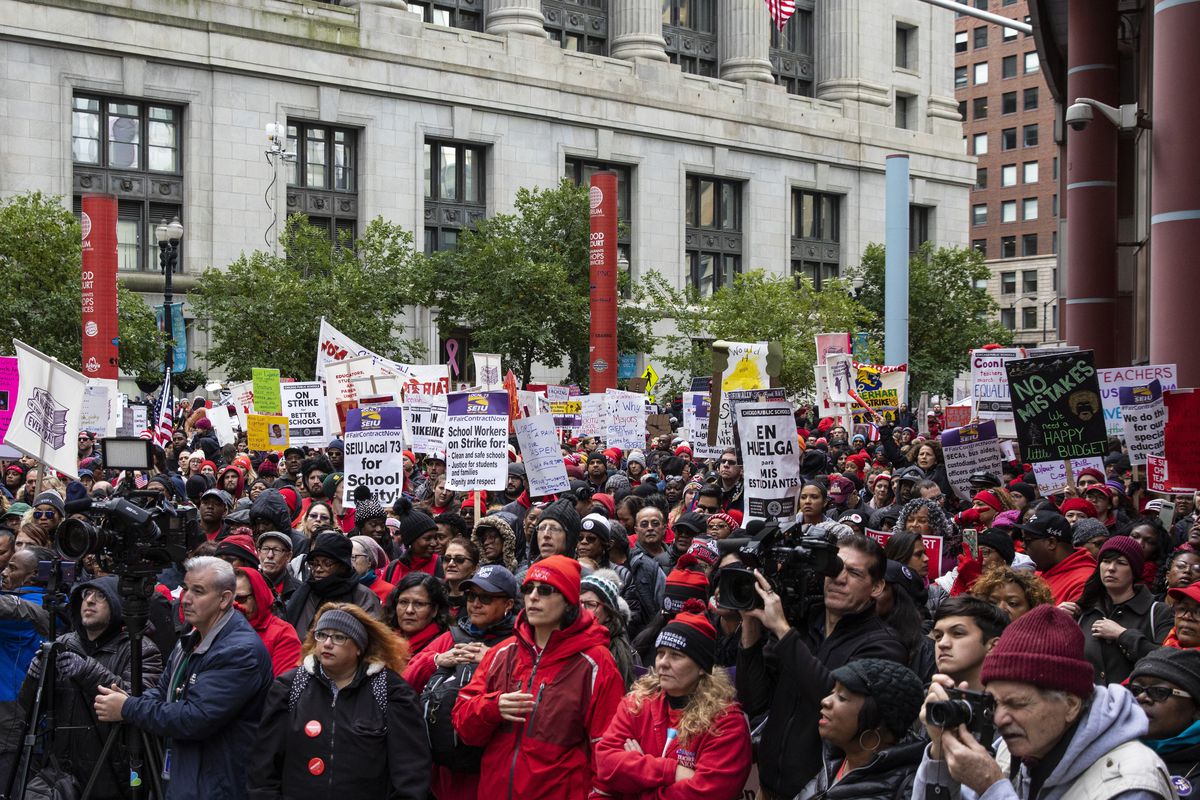 Thousands of striking Chicago Teachers Union and their supporters rally at the Thompson Center after marching at City Hall before Mayor Lori Lightfoot was scheduled to deliver her first budget address during the monthly Chicago City Council meeting, Wednesday, Oct. 23, 2019.

UPDATE: CPS is planning to announce that all classes will be held remotely this fall, sources told the Sun-Times late Tuesday.

Less than a year removed from its longest labor stoppage in three decades, the Chicago Teachers Union is convening an emergency meeting of its elected delegates early next week to discuss another strike vote that would put pressure on Chicago Public Schools to back off its plan for a partial return to classrooms next month, a source told the Chicago Sun-Times.

The timeline for a potential vote is unclear, but as teachers unions across the country play significant roles in the resumption of American education, the CTU appears to be the first major teachers union in the nation to move toward a potential walkout over coronavirus concerns.

Any strike authorization would need the approval of three-quarters of the union’s 26,000 rank-and-file members. The meeting next week would mark the first steps of a member-based process toward another walkout. Depending on the resolution put forth at the meeting, a vote could take place that day or could come at a later meeting after the union’s 700 delegates discuss the potential strike with members at their schools.

The CTU has been highly critical of Mayor Lori Lightfoot and CPS officials’ proposal to put most of the 300,000 students at non-charter schools back in classrooms twice a week this fall.

Though city officials have repeatedly said they haven’t yet made a final decision on in-person learning and would wait to do so until closer to the start of the school year, the union has cited the health concerns during a raging pandemic as reasons why that choice shouldn’t even be considered right now.

CPS spokeswoman Emily Bolton said in a statement Tuesday that “nothing is more important than the health and safety of our students and staff, and Chicago Public Schools won’t open its doors on September 8 if public health officials don’t deem it safe to do so.”

“We continue to gather community feedback and closely monitor the public health data before making any final determinations for what learning will look like this fall,” noting the five community meetings CPS held last week that were attended by thousands of parents

At protests Monday in which the union ramped up its public attacks, CTU Vice President Stacy Davis Gates, an outspoken and frequent critic of Lightfoot, said it’s too dangerous to send students and staff back to schools with COVID-19 cases on the rise again.

Davis Gates said the mayor was displaying “failed leadership” and answered “no” when asked whether there was anything Lightfoot or CPS could do in the next month to get teachers to agree to go back into schools Sept. 8, the start of the next school year.

Lightfoot has been reluctant to enter another fierce battle with the union that supplied her first political test as mayor last fall during an 11-day strike. When she unveiled CPS’ fall plan last month, Lightfoot said she wasn’t worried about a legal challenge or another strike by the CTU and said she believes any differences would be sorted out between then and the start of school.

The CTU’s national parent union, the American Federation of Teachers, made waves late last month when it passed a resolution to support strikes by local affiliates “as a last resort” if school districts don’t take the necessary health measures to keep teachers and students healthy in schools.

During a news conference Tuesday about the state of the coronavirus in Chicago, Health Commissioner Dr. Allison Arwady was asked whether it was safe for parents to send their kids back to school.

Arwady said it depends on whether the local outbreak “is under control” and whether schools have safeguards in place to control the spread.

“Our numbers are on the way up, so I have some concerns there,” she said. “I can’t say the risk is zero, of course. And again, the more our numbers are going up in Chicago, the more concern I have about this because, as our cases increase, the risk of people having COVID — especially asymptomatic COVID — does go up.”

But she quickly added, “I personally am in favor of having children in school. … Where the child is at school wearing a mask with the social distancing with the appropriate procedures in place, I honestly do not think the risk of spread is significant. I wouldn’t be promoting this if I thought it was.”

Dr. Taylor Heald-Sargent, a Lurie expert in pediatric infectious diseases, was quoted as saying that one takeaway from the study he led is that it cannot be assumed that, “Just because kids aren’t getting sick or very sick that they don’t have the virus.”

On Tuesday, Arwady was asked whether those findings make her think twice about the hybrid return-to-school model proposed by the Chicago Public Schools.

“This one was about level of virus that’s been found. There’s other epidemiological studies that are, instead, looking at the risk ... of young children under 10,” she said.

“We know that young children under ten in households in some very large studies out of Korea are about half as likely to spread,” Arwady said. “Finding virus does not necessarily mean spreading virus. Lots of questions remain in this space would be my answer at the end of the day.

She added: “We’ve done a lot of thinking about how to do this as safely as possible. Those pods. The distance. All of these things are in place to keep the risk of spread down at school. As long as children are broadly able to follow that, they should not be bringing additional risk back to their households.”