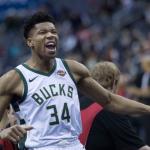 1. Athletes Shut It Down for Racial Justice

2. Statement from Labor Movement in Support of Work Stoppages for Black Lives

1. Athletes Shut It Down for Racial Justice

In the aftermath of the August 23 police shooting of Jacob Blake in Kenosha, Wisconsin, the Milwaukee Bucks basketball team shut down their playoff game with the Orlando Magic in protest. This triggered shutdowns of other NBA games and negotiations with the owners on practical steps that could be taken to deal with systemic racism.

Superstar LeBron James has long been leading a campaign to promote voting. The NBA players got the owners to agree to use their arenas as giant polling places. THIS IS BRILLIANT! In the center of mostly urban areas there will be giant public polling places that can be sanctuaries for unimpeded and unintimidated voting, in buildings designed to handle large crowds quickly and efficiently. Imagine NBA stars outside as poll watchers insuring that urban voters, Black and brown folks, can file in unsuppressed by armed para fascists.

This kind of resistance to voter suppression is crucial to winning the swing states that Trump carried in 2016 and where enthusiasm for him is still riding high. The margins in each of those states would have been overcome if Black people had voted in numbers that can be attained in 2020. Here are the margins for Trump and the numbers of Blacks who did not vote in 2016:

Now imagine if football players and their union follow suit and liberate their giant stadiums as polling places monitored by hulking offensive linemen. Seems far-fetched in a league that did not back Colin Kaepernick in his protest for Black Lives Matter in 2016. But the times they are a changing and swiftly. Check out Seahawks Coach Pete Carroll’s moving interview calling out systemic racism.

And what could be the role of the rest of the U.S. labor movement? The pro athletes have 100% membership in their associations (unions). The rest of organized labor – public and private sector combined – is at 10%.

There is talk about national strikes and those should not be ruled out, but a  more plausible course of action in every major American urban center would be to join with NBA stars and provide a cordon sanitaire of safety for voting at arenas. This plays to labor’s continuing urban presence in many of these urban centers and to the fact that a large part of its public sector urban membership is people of color. How can labor play a role in fighting voter suppression? Labor can mobilize its ranks to provide massive security squadrons for urban arenas and maybe even some football stadia on November 3!

This article is being published jointly by Organizing Upgrade and The Stansbury Forum.

2. Statement from Labor Movement in Support of Work Stoppages for Black Lives

Last week’s actions by professional athletes in the NBA, WNBA, NFL, MLB, and professional tennis are a call to action for all of the labor movement.

They remind us that when we strike to withhold our labor, we have the power to bring an unjust status quo to a grinding halt. The status quo--of police killing Black people, of armed white nationalists killing demonstrators, of millions sick and increasingly desperate--is clearly unjust, and it cannot continue.

As unions representing millions of  workers across the country, we stand in solidarity with our comrades on the courts, on the fields, and in the streets. We echo the call to local and federal government to divest from the police, to redistribute the stolen wealth of the billionaire class, and to invest in what our people need to live in peace, dignity, and abundance: universal health care and housing, public jobs programs and cash assistance, and safe working conditions.

Progressive labor leaders stood with the Civil Rights Movement in the 1960s. We have a long history of supporting the Black Freedom Movement and we will not stop now. The labor movement and the Movement for Black Lives are each other’s keepers, and we are ready to work together to do what we must to win justice for our people. We support the demands for racial justice echoing throughout this nation, and the simultaneous call for a more just economy. We will use our strength and influence to make sure organized labor is on the right side of history in this moment.

*For brevity, only officers of unions that have not already signed on as unions have been listed here.