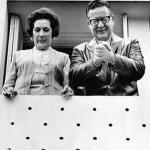 Fifty years ago today, on the night of Sept. 4, 1970, I was dancing, along with a multitude of others, in the streets of Santiago de Chile. We were celebrating the election of Salvador Allende, the first democratically elected socialist leader in the world.

President Allende’s victory had historical significance beyond Chile. Before then, political revolutions had been violent, imposed by force of arms. Allende and his left-wing coalition used peaceful means, proclaiming it unnecessary to repress one’s adversaries to achieve social justice. Radical change could happen within the confines and promises of a democracy.

It was a thrilling moment to be alive. Anything seemed possible. I remember the people — workers who had built that country and been denied its riches, women from shantytowns with children in tow — pouring into the city center, their rebellious presence portending a new social order.

I have often fantasized about how different the world would be if Allende had not been overthrown, three years later, in a bloody coup. I wonder where humanity would be if his peaceful revolution had been allowed to run its course and become a template for other countries.

Commemorating this anniversary should not be an exercise in personal nostalgia, however. Allende’s victory still matters because it continues to speak to us in many ways, especially now, as the United States faces a momentous election of its own.

Socialism is not on the ballot this November, despite President Trump’s deranged efforts to portray his opponents as extremists. But voters will be deciding whether this country will embrace sweeping change or remain trapped in the past. If Joe Biden wins, American citizens, of which I am now one, will have to ask themselves major questions about how to implement much-needed reforms, as we did in Chile all those decades ago.

Any process of systemic change will always run into difficulty. In the case of the U.S., critical transformations like police reform can either be accelerated to ensure there is no turning back or slowed to avoid a debilitating backlash. In some instances, negotiations will be crucial. In others — climate change, COVID-19 — demands must be doggedly non-negotiable.

The Biden administration will also have to work constructively with throngs of inspiring activists who are eager to advance further and more quickly than the majority of the nation is willing to go. Even more crucial, the administration will have to isolate and outmaneuver the well-armed and well-financed fanatics who are virulently opposed to any limitation of their privileges and ready to resort to violence.

If we had resolved similar challenges in Chile, we might have prevented Augusto Pinochet’s catastrophic dictatorship — 17 years of executions, torture, persecution and exile, the effects of which we are still suffering today.

There was another factor that contributed to our failure: The United States promoted the overthrow of Allende, then nurtured the tyrannical regime that ensued. Chile is far from the only country whose sovereignty the U.S. has flouted, of course. America has helped to overthrow democratically elected governments in Iran, Guatemala, Indonesia, and the Congo, among others. But the destabilization of Chile — the squashing of the hope that flooded the streets of Santiago 50 years ago — had particularly perverse consequences. Just as this country must confront the mistreatment and marginalization of many of its own people, so must it face up to its legacy of imposing suffering on other lands.

The death of Chilean democracy and inauguration of a reign of terror — symbolized by Allende’s death at the Presidential Palace on Sept. 11, 1973 — also turned the country into a ruthless laboratory for neoliberal economics, the same savage capitalism that is being vigorously contested in the United States today. It would be naïve to suggest that the Allende government could have precluded that neoliberal paradigm from conquering the world. Plenty of other nations were primed for the experiment. But it is sobering to think that if Chile’s revolution had not been thwarted, it may have provided a model for how the U.S. could emerge from its current crisis of inequality and division.

I expect Americans will have cause to dance in the streets this November, as another electoral victory announces the dawn of a new era. And if so, I hope some among them might remember that they are not alone — that, once upon a time, other men and women danced toward justice in a land that is not, after all, that far away.

Ariel Dorfman is the author of “Death and the Maiden.” His most recent books are “Cautivos,” a novel about Cervantes, and “The Rabbits’ Rebellion,” a story for children and adults. He lives in Chile and in Durham, N.C., where he is a professor emeritus of literature at Duke University.