Transit Workers Are Still Dying—With No End in Sight 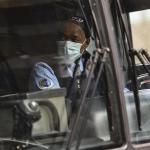 Marcia Brown is a writing fellow at The American Prospect

Why subscribe? Because we can't do this without you.