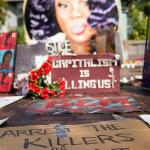 The eruption of protests and rebellions following the murder of Minneapolis resident George Floyd sent shockwaves across the country; indeed, around the world.  Suddenly, in the context of a pandemic unlike anything that we in the USA have witnessed since 1918-1919 and an economic collapse worse than the Great Recession, masses of people were on the move challenging the profound racial injustice demonstrated by law enforcement abuse against racialized populations and, specifically, against African Americans.  “Black Lives Matter” became the renewed battle cry and, when it met with the response that “All Lives Matter,” the correct refrain was, all lives should matter, but the reality of the USA is that Black lives don’t matter.  And, as we swept away the racial fog that surrounds so much in the USA, we discovered that other racialized populations were also regular targets of extrajudicial violence, including Native Americans, Chicanos, Puerto Ricans, and Asian Americans.

The moment in which we live is explosive because of the fusion of crises, including but not limited to the Covid19 pandemic, the economic collapse, the environmental catastrophe, extrajudicial violence targeting racialized populations, and a growing right-wing populist movement with a crypto-fascist President as its main spokesperson.  In this situation, organized labor—the trade union movement—has been inconsistent; sometimes paralyzed; and at other moments outspoken.  What it fails to acknowledge, let alone address, is that the political polarization of the USA has placed us in a situation that some commentators have described as a “cold civil war.”

How should we understand the term “cold civil war”?  It means that the social, economic, and political contradictions in the USA have been brewing in such a way that there is a polarization undermining a so-called mainstream consensus within the democratic capitalist framework.  It does not necessarily mean that we are in pre-civil war situation, i.e., it does not necessarily mean that we are on the verge of a military conflict, but it does mean that the antagonisms have bubbled to the surface and have moved outside of the generally accepted bounds of democratic capitalist politics.  This includes the increased use of extrajudicial violence by the authorities as well as by paramilitaries.  To be clear, the polarization that has emerged is between forces that are advancing right-wing, irrationalist authoritarianism, on the one hand, and those who favor democracy (subject, of course, to wide interpretations).

None of this should surprise us since the Republican Party has shifted dramatically, since the late 1960s, in a rightward direction and, particularly beginning in the 1990s, flirted more and more with right-wing populist movements as a means of driving forward their neo-liberal economic agenda and their anti-20th century social and political agenda.

We now have an Administration that flirts with open fascists; articulates lies and other forms of irrationalism; and has threatened to ignore the results of the November 2020 election should they lose.  All of this lays the foundation for, quite possibly, a series of confrontations between pro-democracy forces, on the one hand, and on the other, both pro-Trump forces of the State as well as pro-Trump mass movements and militias.

What must be done?

(1) Organized labor must pull its collective head out of the sand:  Most immediately there must be a recognition of the toxic danger contained in the growing right-wing populist threat.  While it is clear that the majority of the USA, including the majority of the US working class, has no interest in right-wing populism, it is also the case that right-wing populism represents a major threat to the working class movement specifically, and the USA more generally.  Organized labor needs to speak openly about this threat and not act as if this is not a “labor issue”.

(2) Organized labor must advance a mobilization process that engages its members in supporting efforts to rethink, restructure, reallocate, and demilitarize law enforcement:  This is not just a matter of transforming local police departments but also must include addressing the barbaric treatment of documented and undocumented immigrants and refugees by ICE and the Border Patrol.  US authorities are treating migrants as cattle, completely ignoring the fact that many of these migrants are at our borders precisely because of the role of the USA in undermining the economies, environments, and sovereignty of their respective countries of origin.  Contrary to the right-wing myth that these migrants are coming to the USA in order to have so-called anchor babies—as opposed to the industry created to facilitate just this for many East Europeans—migrants from the global South are arriving at our borders largely because of the damage done to their homelands.

(3) Organized labor must put into place pro-democracy volunteer brigades in preparation for the November election:  We need volunteers who will assist with voter registration; mobilize in large numbers should law enforcement and right-wing militias show up at polling places in order to intimidate voters; block the right-wing from challenging legitimate voters and ballots; and lay the groundwork for massive civil disobedience should the Trump administration attempt to forestall the elections and/or refuse to recognize the results.

(4) Organized labor must join hands with other social movements in creating a broad front for democracy and against repression:  Organized labor cannot do any of this work alone.  It must reach out to potential allies with a focus on opposing the growth of authoritarianism.  The ‘price of admission’ to this front or coalition must be low, i.e., we need to recognize that there are many things around which we shall disagree, but the time has come to join hands in the name of defending AND expanding democracy.

We may not get a second chance.

Jose Alejandro La Luz is a lifetime trade unionist in both private and public sector unions in Puerto Rico and the US....La Luz was a National Surrogate for Senator Bernie Sanders campaign focusing his efforts mobilizing Latino voters in Nevada and Texas.

Bill Fletcher, Jr. is the executive editor of globalafricanworker.com, former president of TransAfrica Forum, and a lifetime trade unionist.