The Frontline: A Black-Led, Multiracial Coalition Throws Down 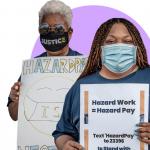 Ash-Lee Woodard Henderson of the Movement for Black Lives Electoral Justice Project anchored the launch of The Frontline September 21 and offered a hard-hitting sum-up of the project’s goals.

“We are part of The Frontline because our lives and the lives of the people that we love depend on us fighting with everything we’ve got to overthrow the Trumpism, the white supremacy, the white nationalism – all the harm that is being done by this administration to our communities. We are committed, not to fighting for a savior on Pennsylvania Avenue, but to fighting for our next target. And we will come as hard at the new administration that we hope will follow the Trump administration as we are at Trump right now.”

The Frontline is a new initiative from the Working Families Party and the Movement for Black Lives Electoral Justice Project that aims to forge a Black-led, multiracial coalition that can carry forward the energy of the uprising – “the largest social movement in U.S. history” – in both electoral and non-electoral forms.

“Every four years there’s a chorus of voices that say, ‘This is the most important election of our lifetime.’ This year, I’m one of those voices. The stakes could not be higher.

“In the midst of unprecedented crises, millions of people have taken to the streets to support and flank the Movement for Black Lives and focus on ending systemic violence and racism against Black folks. We’ve seen how powerful it can be when the movement in the streets is channeled into the polls. Amid a pandemic when voting was literally a risk to people’s lives, movement candidates like Jamaal Bowman and Cori Bush shocked the establishment.

The speakers who elaborated on the vision of the new formation highlight the breadth of experience from The Frontline’s partner groups: Patrisse Cullors, Co-Founder of Black Lives Matter; Brittany Ramos DeBarros, Organizing Director of About Face: Veterans Against the War; Greisa Martinez Rosas, Executive Director of United We Dream Action and M. Adams, Co-Executive Director of Freedom, Inc.

WIN AND PROTECT THE VOTE, LIFT UP RADICAL DEMANDS

“The Frontline is a movement-driven space with vision that not only articulates what we want, but also begins to cohere us. Not only from now through November 3, but for the first 100 days and beyond that…

“We plan to work together in the smartest, the most principled, visionary way. So, here’s the proposal. We need to defeat Trump in a landslide. Number two, we need to use this movement to push Biden and Harris and move them to the left. Social movements have the ability to do that, as this summer’s Black liberation uprising has shown. We need to be on the offensive.

“We also need to plan for the possible chaos that will happen from the election to the inauguration. We need to be prepared for rapid response, for building the biggest possible ‘we’ to defend the democracy that is our democratic process.

“And then we must seize the opportunity in the first hundred days to lift up the demands our movements have been fighting for decades. We have an opportunity to make the BREATHE Act real. We have the capacity to pass a Green New Deal, to continue to push for a real People’s Bailout, not a corporate bailout.

“But we can only do this if we make these demands movement demands, make them demands across our particular sectors and constituencies. We envision a Black-led, multi-racial front that has a vision to defeat Trumpism and neoliberalism and all systems of oppression, and build toward a radical governance rooted in justice and dignity.”

THE SPACE TO FIGHT ANOTHER DAY

Brittany Ramos DeBarros of About Face pulled no punches in talking about the political and emotional dilemmas confronting antiwar activists in this election.

“The wars that have continued under Trump are wars that Biden helped make happen. We have to be honest about that. I deployed to Afghanistan under Obama and Biden’s administration, so when I say I have nothing nice to say about the man, I want you to know that it is not just ideological, it is personal. And yet, I’m here, unified with our people, because this is about us, not him. My integrity has to be rooted in the principle of what allows us to fight another day.”

DeBarros went on to describe Trump’s polices toward Yemen, Cuba, Venezuela, and other countries, debunking the notion that he is in any way a peacemaker. Both Biden and Trump are warmongers, she said, but “we cannot be lazy in our assessment and pretend they are the same…”

“How do we relate to an election where this is the choice that is offered us? I encourage us to side with our people. It is not about the person; it is about choosing the terrain that we will be fighting on. We have to move collectively and strategically.”

Several other speakers at the launch also fused personal experience and political insight, emphasizing the urgency of addressing and engaging those who are most vulnerable and marginalized. These constituencies have the biggest stake in social change, but also have seen their interests most ignored by politicians of all stripes. Many – especially among Black and Latinx youth – have been spurred to action by the uprising in defense of Black life. But these are also the constituencies that the Trumpist right is working hardest to exclude from participation in politics through voter suppression, disinformation, malignant neglect in the COVID crisis, and threats and use of both state and non-state violence.

The uprising moved the fight for racial justice to the center of the overall progressive agenda. The Frontline aims to keep it there and bring the energy of the most excluded and marginalized into a Black-led multiracial coalition united around visionary demands and a practical strategy to move them forward: engage the electoral fight to defeat Trump, take to the streets to protect the election results, and catapult the BREATHE Act and other big-change legislation into the first-hundred-days agenda of the next administration.

The more progress The Frontline makes, the more strength will accrue to every component of the fight for democracy, justice, working class power and deep structural change.

Individuals can join The Frontline by signing up on the project website here or by texting “Frontline” to 30403.