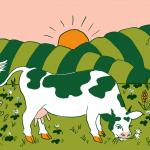 “Sustainability” means different things to different people. Some bike and take public transit rather than driving a car; others have given up flying, while still others have made smaller changes to their habits, like bringing a canvas bag to the supermarket. One broad area of agreement that’s emerged over the last decade is that perhaps the biggest change a person can make is to put down their burgers and steak knives, with scientists and the media stressing that forgoing meat generally—and beef particularly—could be the “single biggest way” for individuals to reduce their carbon footprints.

That's for good reason: Livestock production contributes about 14.5 percent of greenhouse gas emissions globally, and the bulk of that comes from cattle. Between beef and milk, cattle are responsible for a staggering 61 percent of the entire production of livestock emissions. (Pigs and poultry/eggs contribute, respectively, 9 percent and 8 percent.) No wonder it’s become a go-to refrain: Cut the beef, cut back on dairy, and there you go—an easy equation for sustainable eating.

But what about beef that bills itself as sustainable—grass-fed cattle from small ranchers, like the kind you might see at the farmers market? The numbers above are derived mainly from massive factory-farming operations—the same ones that create horrific conditions for not only the cattle living in containment, but also for the meat-processing workers who are packed together, underpaid, and vulnerable to repetitive motion injuries. During the COVID-19 pandemic, with meat processing deemed “critical infrastructure,” these inhumane workplaces have become hotbeds of the virus.

Meredith Leigh, a North Carolina-based farmer and butcher, and the author of The Ethical Meat Handbook, doesn’t endorse that kind of system, but she also doesn’t endorse what she calls the “binary conversation” around meat eating and sustainability: “It's either eat a Big Mac or you're vegan,” Leigh says. “What we're missing is this massive middle ground.” Small-scale, grass-based farming, she says, “is representative of this other story in between the Big Mac and the vegan.”

Paige Stanley, a doctoral researcher at the University of California, Berkeley, who focuses on agriculture policy and sustainable animal agriculture, concurs: “Certainly livestock do contribute to climate change through greenhouse gas emissions,” she says. But the extent of their contribution depends heavily on how the beef is produced—and the environmental impact of that burger isn’t as clear-cut as “grass-fed” versus “factory-farmed.” To understand the nuances, you have to understand the ways in which beef production can be harmful to the environment, namely the energy use entailed by cattle farming, which includes the production of animal feed; the large amounts of land required to raise cows, which can contribute to deforestation; and the methane that’s emitted as flatulence during the cows’ digestive process.

When you’re considering only methane emissions, feedlot beef actually comes out ahead. In this model, cows raised on a pasture are moved to feedlots to be fattened up on grain about three months before slaughter; in the grass-fed model, cows continue to graze until their death. “You'll hear industry experts say, feedlot beef is better. And there's evidence to support that,” says Stanley. With their high-energy corn diet bringing them more quickly to market weight—i.e., they can be slaughtered sooner—feedlot cattle tax the environment less simply by living shorter lives, thus releasing less methane. “Both of those factors contribute to less total greenhouse gas emissions coming from those animals compared to completely grass-finished animals,” Stanley continues. “Those animals take longer to gain a lot of weight. They're also on high-forage diets, which means that they are producing more intact methane.”

It's on the level of broader greenhouse gas emissions—as well as on the animal welfare level—that grass-fed beef is a better option. “The tides turn quite a bit,” Stanley says. “In a feedlot, you're using a lot of energy, you're using largely a grain-based diet, which requires a lot of fossil fuels, a lot of fertilizer, a lot of irrigation. And so the fossil-fuel-derived greenhouse gas emissions for feedlot beef tend to greatly outweigh that of grass-fed beef.” Moreover, Stanley’s research suggests that with the right farming techniques—where cows are rotated carefully from pasture to pasture, allowing the soil underneath to absorb enough carbon to effectively cancel out their methane emissions—grass-based cattle farming could even be a carbon-neutral enterprise.

Still, the average person in the U.S. consumes about 55 pounds of beef every year, courtesy of factory farms or shipped from overseas. Can producers of grass-fed beef meet that kind of demand—while adhering to sustainable ecological, animal welfare, and labor practices?

The U.S. has the land available for this kind of ranching, Stanley says. What it lacks is policies that would encourage “the types of practices that I view as the gold standard for climate change, ecosystem health—it’s not just grass-fed. There are very few incentives for people who are grazing cattle to use those practices right now.” Some programs, such as the Conservation Stewardship Program, help farmers both financially and with learning resources.

As for those small producers already practicing grass-fed farming, other changes would have to happen in order for them to be able to scale up to meet demand. Factory-farmed cattle operations, which process meat and dairy, currently enjoy $38 billion per year in government subsidies. Smaller operations do not get those breaks. Creating incentives for ranchers to adopt new practices and pushing policy changes will shift the burden of education off the consumer. But Leigh, the North Carolina farmer, says consumers still have a role to play, beginning with getting to know the farmers they're buying their beef from—and learning how that beef is produced. “Once you've done that and created that relationship, then the answer really becomes, ‘How much beef can I afford to buy from this farmer at a price that supports him living a decent quality of life and supporting his family?’” That might mean dialing down.

“I do not think it is realistic, at this moment in time, that we can meet our current demand for beef consumption using ecological farming,” says Leigh, the North Carolina farmer. It's time, she says, to “eat less meat" and "eat better meat.”