McConnell has Written off Trump, it's Now all About Preemptively Crippling the Biden Administration 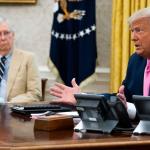 House Speaker Nancy Pelosi has been taking a lot of fire for not just capitulating to Republicans and taking the poison-pilled scraps that they are purportedly offering in pandemic relief. Those poison pills are the big tell here. Mitch McConnell doesn't want a deal and his refusal to pass anything without them are all the proof you need.

We've speculated about this for a few weeks, the possibility that McConnell and his fellow Republicans have already given up on a Trump victory, and is purposefully wrecking the economy to complicate Joe Biden's first year in office. Both in giving him a wrecked economy, and setting the stage for making it harder to demand the trillions that are going to be necessary to save the country. That speculation has proven true, with Republican operatives admitting that's the strategy.

As the Washington Post's Greg Sargent points out, McConnell has offered up the bare minimum of assistance to give vulnerable Republicans something to point to, to tell voters that they've done a thing and maybe, maybe save his majority. But he's got his poison pill that he knows Democrats will not accept: absolving businesses from any liability for exposing their workers to infection with COVID-19. It's seemed for months that McConnell didn't want a deal and now, well, a Republican operative confirms it, and says point blank it's about fighting Biden next year.

A GOP strategist who has been consulting on Senate campaigns told Bloomberg that "Republicans have been carefully laying the groundwork to restrain a Biden administration on federal spending and the budget deficit by talking up concerns about the price tag for another round of virus relief." A number of hard-core Republicans have been using the deficit peacock's argument against saving the nation for months, to be clear. This isn't new—it's what Ted Cruz and Rand Paul and Ron Johnson have been arguing since early summer. But now it's hardened into how they'll deal with a Biden administration starting in January. "The thinking, the strategist said, is that it would be very hard politically to agree on spending trillions more now and then in January suddenly embrace fiscal restraint."