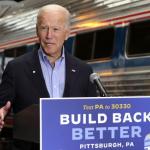 President Trump has been hysterically warning the American people that Joe Biden’s economic plan will “quadruple your Taxes” and cause a “Depression!!!” And yet, despite Trump’s fame as a business mogul, you might be surprised to learn these claims are not credible.

The American Enterprise Institute, a right-of-center think tank, has published a study of Biden’s tax plan. Biden is not going to quadruple anybody’s taxes, but he will increase the tax burden on the very rich. The richest 5 percent of taxpayers would bear almost the entire burden of Biden’s plan, which would raise $2.8 trillion over the next decade, mostly by taxing people who own businesses directly, or through stock.

But is Biden’s plan to soak the rich going to hurt the economy? Not really. AEI finds that it would reduce Gross Domestic Product by 0.16 percent over the next decade, a trivial amount. Since those tax cuts will finance social investments — at least some of which will yield positive returns — it may well increase economic growth, while spreading the proceeds more equitably.

So does that mean Republicans are going to support it? No, of course course not. Republicans are fervent believers in supply-side economics, a theological conviction that lowering taxes on the rich is the single best way to ensure of economic growth. If decades of failed predictions haven’t budged the party’s commitment to this creed, the say-so of an esteemed conservative think tank won’t, either. One reason is that, in addition to believing low taxes on the rich help everybody, many conservatives believe low taxes on the rich are simply the right thing to do, since redistributing money from rich to the poor through tax and transfer schemes is immoral.

Should Biden win, Republican rhetoric will pick back up where Trump left off, warning about depressions and socialism. But intelligent right-of-center analysts have laid down a marker. Biden’s tax hike on the rich might lighten their wallets, but the economy will do just fine.