Barrett’s Evasions Show Why Expanding the Court Is Necessary 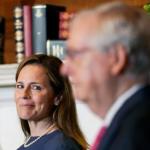 Donald Trump has been admirably candid about the fact that he’s rushing the nomination of Amy Coney Barrett to be a Supreme Court justice because he might need her help to decide the election. “I think this [the election] will end up in the Supreme Court,” Trump told reporters on September 23. “And I think it’s very important that we have nine justices.”

During Tuesday’s Senate hearings, Barrett was asked if she would recuse herself if the scenario Trump outlined came to pass and she had to pass judgment on the election. Barrett refused to commit to recusal, protesting that her personal integrity would guard against any wrongdoing. “I certainly hope that all members of the committee have more confidence in my integrity than to think I would allow myself to be used as a pawn to decide this election for the American people,” she said. Alarmingly, Barrett refused to answer questions about whether Trump has the unilateral right to postpone the election and whether he should commit to a peaceful transfer of power.

Barrett is framing the issue of integrity in narrowly personal terms, as if her own honesty were all that counted. But integrity is a matter of legitimate systems as well as honorable people. It doesn’t matter how much personal decency Barrett has. Her pending elevation to the Supreme Court is the culmination of a corrupt process, one that calls into question the legitimacy of the institution itself.

As Tufts University political scientist Daniel Drezner notes, “So on the one hand everything I’ve read about Barrett suggests she is a person of integrity but on the other hand she willingly accepted the nomination of an impeached president in a rush job of a confirmation process weeks before Election Day.”

By affirming her own personal integrity, Barrett is asserting that she should be evaluated as an individual jurist. But in her public capacity as a judge, she’s not an individual but a soldier in a political army, one that has violated many democratic norms in order to secure a 6-3 supermajority for the Republican nominees on the Supreme Court. It’s the operation of that machine that makes her nomination disquieting.

The path that created that 6-3 majority is well-known: the death of Antonin Scalia, followed by the Republicans under Senate majority leader Mitch McConnell blocking Barack Obama’s nominee Merrick Garland from even receiving hearings, Donald Trump winning the White House with the promise to nominate conservative judges, assurances by Republicans that under the same circumstances as Scalia’s death they wouldn’t nominate a Republican judge, the death of Ruth Bader Ginsburg, and the Republican violation of their own stated standards.

But the corruption goes deeper. McConnell has two great and odious achievements: He has protected Donald Trump from investigation for corruption, and he’s packed the federal judiciary with Republican nominees. McConnell’s two legacies are intertwined. In the Trump era, the institutional GOP has made a deal with the devil: Trump is shielded from the consequences of his crimes, in exchange for which he’s outsourced the selection of judges to the reliably right-wing Federalist Society, with McConnell’s mastery of Senate rules ensuring almost all those nominees will be seated.

McConnell’s work as Trump’s enabler has been constant—and was most visible during the impeachment trial, when the majority leader ran roughshod over rules to ensure there would be no subpoena of witnesses and documents. As Senator Jeanne Shaheen noted in January, “This is not a fair trial … this is a cover-up, pure and simple.”

McConnell has paid a high price in reputation for covering up crimes. It will taint his legacy. But the real-world payoff for the cover-up has also been immense. Since McConnell had already diligently worked to block Obama nominees, this meant that under Trump the Republicans could stack the courts with hundreds of Republicans.

As Jonathan Capehart noted in The Washington Post, “it should be clear that the real ‘court-packing’ has been happening under Trump. Because Republicans choked off confirmations under Obama, Trump ‘inherited’ 103 vacancies, notes a 2020 Brookings study. As of Oct. 6, according to the American Constitution Society, 218 judges have been confirmed, more than Trump’s Republican predecessors and second to Democratic President Jimmy Carter. The average age of Trump’s appointees to courts of appeals, considered the farm team for the Supreme Court, is 48.2 years.”

The Supreme Court supermajority is the top of this pyramid of court packing. To use a famous phrase of Justice Felix Frankfurter, Republican court packing is the fruit of the poison tree. It’s a direct result of McConnell’s norm-breaking, including his tolerance for Trump’s corruption.

If Trump is defeated in November, there has to be a push for legal redress of his corruption. But this legal redress is only part of the solution. To let the packed judiciary stand as it is would be to reward the political corruption that was the heart of the Trump presidency. It would set a precedent that tolerance of corruption is worthwhile because you can extract a huge benefit from it.

Court expansion is necessary not just to rebalance the court, but also to offer a remedy for the corruption that created the problem in the first place.

As McGill University political scientist Jacob T. Levy shrewdly noted, court expansion offends the Republican legal establishment precisely because it would mean that their deal with the devil didn’t work. As Levy observes:

I can psychologically understand the furious reaction “we sold our souls for this 6-3 Supreme Court majority and that means we have a right to have it securely delivered” but it doesn’t inspire much sympathy. Those who cheerfully endorsed or cynically tolerated the last 4 years of assault on the rule of law, the separation of powers, due process, and procedural norms all for the sake of judicial appointments might feel that the price they paid increases their claim on that 6th seat but it makes them singularly unpersuasive defenders of the norm against court expansion and its associated protection of judicial independence. This is the accused murderer of his parents throwing himself on the mercy of the court (so to speak) because he’s an orphan.

Expanding the Supreme Court would have many benefits, not least that it would affirm the principle that a deal with the devil always ends badly.