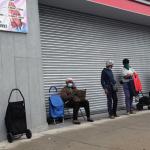 Change vs. more of the same.

That year, President George H. W. Bush’s popularity rating had plummeted from a post–Gulf War high of 89 percent to a recession-induced low of 29 percent, one of the steepest drops recorded in US history. As in most recession-era contests, the electorate threw out the incumbent, choosing the candidate who spoke out against rising unemployment and falling wages (and who promised that longed-for mirage of US politics, universal health care).

Bill Clinton was no friend to the working class, but he was a skillful politician who convinced many that he “felt our pain.” Today, Joe Biden’s finesse and messaging are decidedly less impressive, but Biden still benefits from running against a billionaire incumbent who regularly touts the strength of the economy and an imminent “super V” recovery. While plenty of presidential hopefuls have embarrassed themselves from the heights of their ivory tower bubbles, nothing is more out of touch than claiming: “Our Economy is doing very well. The Stock Market is at record levels, JOBS and unemployment also coming back in record numbers. We are leading the World in Economic Recovery, and THE BEST IS YET TO COME!”

Donald Trump’s super-V recovery notwithstanding, most economists agree that the prospects for the economy are grim. A full-on recessionary spiral was muted largely because of the vast stimulus spending in the spring. Now many of the key elements of those packages — particularly the extended unemployment benefits and loans to small businesses — have expired, pushing millions into poverty. And even if the spigot turns back on, a long-term economic sickness remains.

The state of unemployment shows two distinct trends in the economy. On the one hand, following state reopenings in the summer, the unemployment rate has fallen to 7.9 percent, down from the April peak of 14.7 percent. This is being touted by some to prove that a recovery is underway, even if it is moving more slowly than we’d like. At minimum, mainstream consensus understands that the supposed recovery has stalled. Last week’s new jobless claims rose again to nearly 900,000, seven months into the pandemic.

On the other hand, the Department of Labor released a report this month showing long-term unemployment on the rise, giving mainstream analysts much reason to fret. As Bloomberg’s Joe Weisenthal explained, “What’s particularly worrisome about the permanent unemployment is not just that it’s going up, but that it’s still going up at a pace faster than before the Great Financial Crisis, despite a massive stimulus, a housing boom and a faster-than-expected reopening.”

In fact, the two trends are not contradictory, and the overall picture spells ongoing trouble for the economy and disaster for working people. There are three reasons why.

First, unemployment figures themselves are notorious for lowballing real rates of joblessness, and these problems have been exacerbated by the coronavirus crisis. Heidi Shierholz from the Economic Policy Institute argues that the official unemployment number, 13.6 million, is a severe undercount. A very conservative estimate should count at least 21.5 million jobless workers, millions of whom are not considered officially “unemployed” because they are classified as “discouraged” and have dropped out of the labor force. That figure would translate to a more accurate (but still conservative) unemployment rate of 12.5 percent. This does not include another 11.5 million who have had their hours and pay cut as a result of the pandemic.

Second, it makes sense that unemployment rates would drop from the pandemic high in April. The severity of the pandemic and the lockdowns was a giant, abrupt blow to the economy. Businesses suddenly shuttered, laying off or furloughing staff without a clear picture of whether or when they would reopen. But by summer, most states were lifting restrictions, and businesses brought back at least some of their workers.

Anything short of complete and indefinite lockdowns would have to produce lower unemployment rates. But the rate at which they’ve “stabilized” is still quite high. While this spring’s unemployment level was higher than any we’ve seen since the Great Depression, the current (lowballed) rate of 7.9 percent has only been surpassed three times in postwar America. 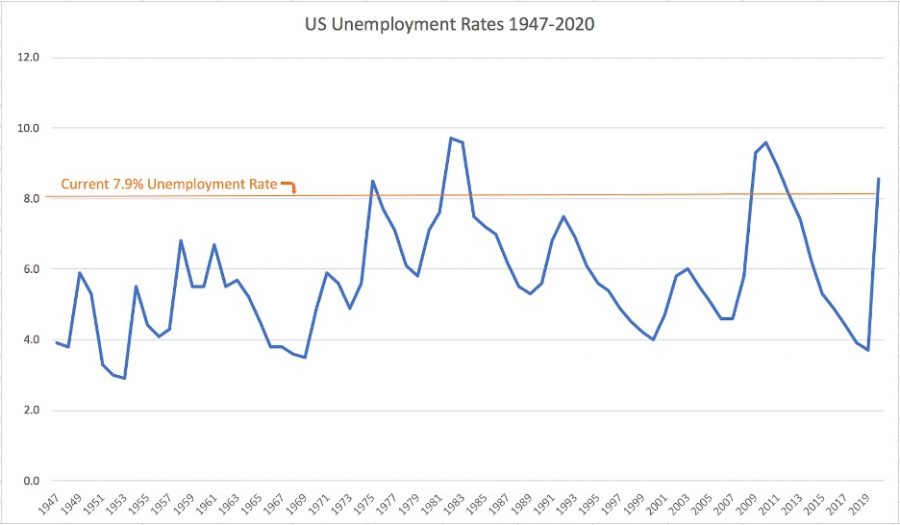 Unemployment rates in the United States between 1947 and 2020.

Yet the most troubling news is that while unemployment rates have decreased, long-term joblessness is steadily rising. The US economy has recovered only half of the 22 million jobs lost this spring, in large part from furloughed workers returning to their jobs. But now job recovery is at a crawl, with few companies actively hiring or recruiting, and many that are beginning to make permanent cuts. As the Wall Street Journal reported last week: “More than half of business and academic economists polled this month said they didn’t expect the labor market to claw back until 2023 or later.” 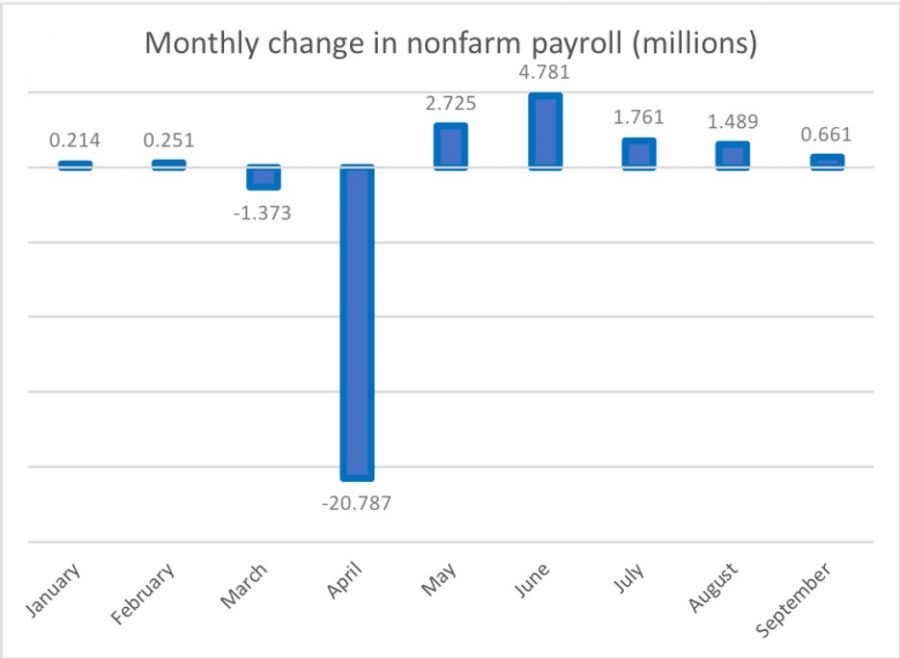 Changes in (nonfarm) payroll for each month of 2020.

According to the Department of Labor employment report, roughly one in ten unemployed people in April reported their job loss as permanent. By September, that number had jumped to four in ten. As more companies announce mass layoffs and job prospects become bleaker still, the ranks of the long-term unemployed will continue to grow. According to the Wall Street Journal: “The number who were unemployed between 15 and 26 weeks rose to 6.5 million in July, the highest reading for records that go back to 1948.” 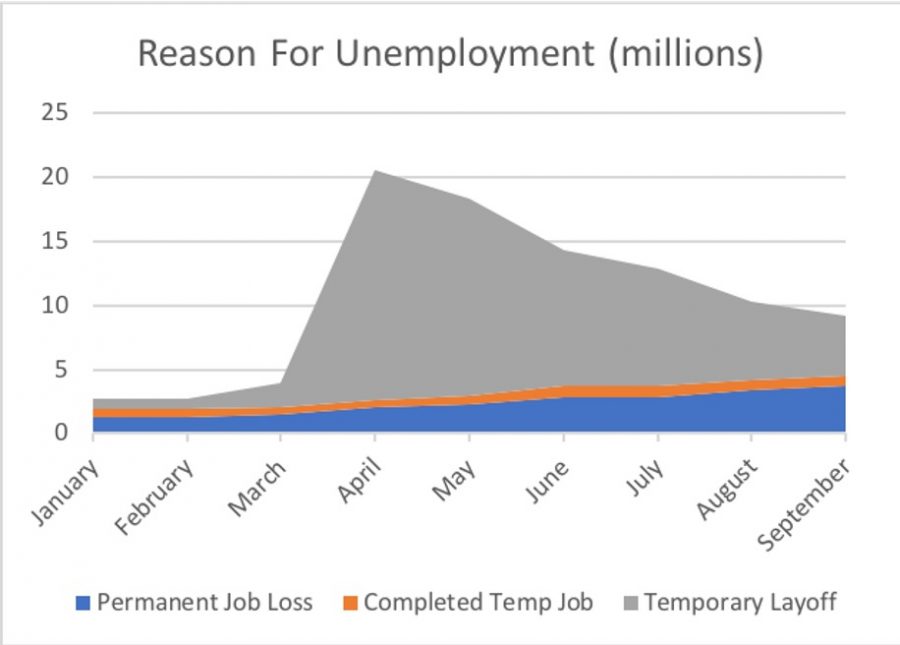 Unemployment for each month of 2020 by reason for unemployment: permanent job loss, temporary layoff, or completion of a temporary job.

This trend will intensify throughout the fall, as airlines and large companies like the Walt Disney Company, WarnerMedia, and Allstate have announced mass layoffs — layoffs that have not yet registered on the unemployment rolls. Meanwhile, Yelp says that 60 percent of closed businesses have no plans to reopen. And with business revenue — and therefore tax revenue for state governments — tanking, state budgets are in a free fall. Politicians are responding with the blunt tool of austerity. And the impact of these cuts to the public-sector workforce, which includes within it some of the most stable segments of the working class, could be severe.

As always, the brunt of the crisis is felt unequally. Large corporations have more capital and access to cheap credit in order to weather the storm, and some are enjoying record stock prices. The billionaire class has, “pandemic be damned,” grown their wealth by $240 billion this year, though the minimum wage hasn’t gone up since 2009. Meanwhile, amid already historic levels of class inequality, working-class people, with little savings to fall back on and drowning under a load of debt, are being devastated by layoffs.

According to analysis by Opportunity Insights, jobs have rebounded at the highest income bracket, but unemployment remains most acute at the bottom. The employment rate among high-wage workers who earn over $60,000 a year is today 1 percent lower than it was in February, while low-wage workers making under $27,000 have suffered an 18 percent drop.

Finally, the vast and criminal differentials in pay and employment across racial lines have meant the financial ruin of entire communities as a result of the crisis. Among African Americans, official unemployment has clocked in between 12 percent and 17 percent since April, with disastrous consequences. As democratic socialist Cori Bush put it: “Coronavirus has devastated Black and Brown communities more than any others. That is not an interesting fact, or a notable trend. That is violence being committed against us.” 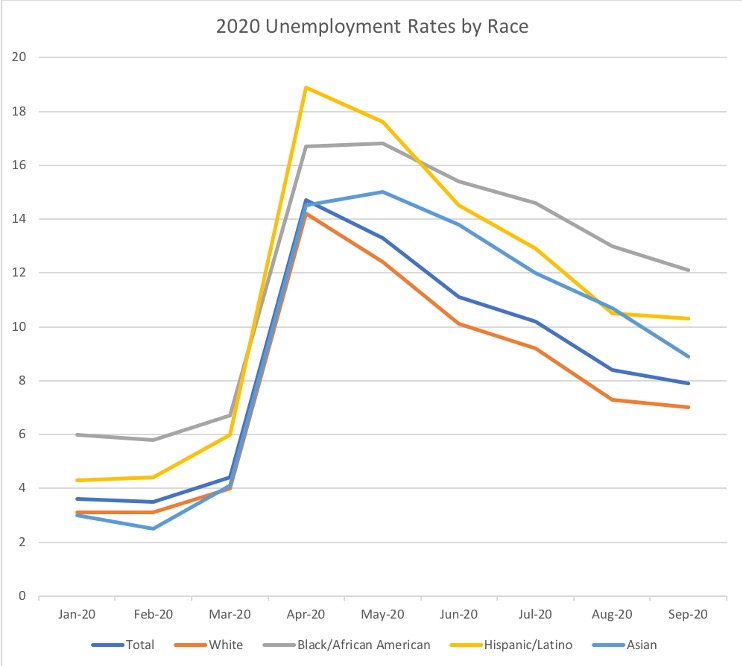 Unemployment rates by race for each month of 2020.

What About the Rest of the Economy?

Of course, the state of the labor market does not equal the whole of the economy. History provides plenty of examples of the ruling elite destroying working-class living standards in order to restore corporate profitability, even if it means forcing through severe recessions.

It’s therefore not surprising that while economists surveyed by the Wall Street Journal by and large took a negative view of the prospects for a recovery of jobs, most thought the outlook for the gross domestic product was a bit better. Leo Feler, an economist at UCLA, explained: “We’re substituting away from labor-intensive services.”

Nonetheless, the unemployment picture is symptomatic of deeper problems — an economy rocked by shocks to supply, demand, and trade. High rates of joblessness also have a great impact on the economic outlook. Tens of millions of people lacking both income and government relief undermines consumer activity and creates economic and political instability. It’s no coincidence that the stock market (not a great metric for the health of the real economy, but a good gauge of investor confidence) has had some of its strongest rallies this past week, in response to news that a presidential win for Joe Biden, whose party is more committed to aggressive stimulus spending, is looking increasingly likely.

The slowing of job gains in recent months and growing long-term unemployment fit more broadly within an economy that shows signs of a deep, long-term slump. Consumer spending is also slowing, and corporate profitability, while uneven, is in troubled terrain. According to Bloomberg News: “Forty-three of the 345 companies with a market valuation above $25 billion have posted cumulative losses over the trailing 12 months worth of reported results . . . as of Oct. 13. At the start of 2020, only 14 companies fit the bill.” (While corporate profitability should not have to be our concern, we do need to understand it, because capitalism is structured to ensure that without profits, the system stalls.)

Given the dismal state of the economy, and the suffering that tens of millions of people are enduring, Joe Biden and the Democrats would do well to heed Carville’s campaign advice: “It’s the economy, stupid.” Instead, Democratic leaders seem to be engaging in a game of chicken with Donald Trump over a future stimulus bill, and Biden’s campaign message is vague and scattered.

The Left would also do well to learn from Bill Clinton’s (and Barack Obama’s) trail of broken promises. Nothing good will come of a Biden presidency without organizing and grassroots struggle from day one.

The economic terrain in the coming years will be bleak. But nothing is predetermined. It will be ongoing battles over budgets, government spending, and wages and benefits that will decide who pays the price — and whether a vision for an alternative economic model can be forged.

Hadas Thier is an activist and socialist in New York, and the author of A People's Guide to Capitalism: An Introduction to Marxist Economics. She tweets at @HadasThier.