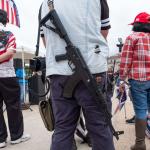 In preparation for potential voter intimidation this year, the Women’s March, Working Families Party, Movement for Black Lives Electoral Justice Project, United We Dream and other organizations are mobilizing “election defenders” to de-escalate tense situations as well as provide voters with personal protective equipment and water on Election Day.

“So far, more than 6,000 people across the country have signed up to be election defenders,” Working Families Party National Director Maurice Mitchell told Truthout. “Trump is operating from a place of weakness, not strength, and the single best way to avoid a contested election is for voters to repudiate him at the polls by an overwhelming margin. And if Trump still tries to steal the election, you can expect us to raise our voices like never before.”

Grace Aheron, communications director of Showing Up for Racial Justice (SURJ), told Truthout that the election defenders who signed up through her organization are now “coordinating teams in their cities and counties across the country to protect the integrity of our election.”

Mobilization efforts are likely to ramp up following Trump’s call-to-action during the first presidential debate on October 6th. “I’m urging my supporters to go in to the polls and watch very carefully, because that’s what has to happen,” he said at the debate. “I am urging them to do it.” In addition Trump told the far right paramilitary group the Proud Boys, who have said on tape “Hitler did nothing wrong,” to “stand back and stand by.”

Already, roughly 20 Trump supporters had descended on a polling booth in Fairfax, Virginia, intimidating early voters and election staff. The demonstrators gathered from a “Trump Train” parade, according to The New York Times; some chanting “Four more years, four more years!” and holding Trump flags, while others drove circles around the voters. Election officials provided escorts for voters and moved the line indoors.

In Philadelphia, election officials turned away one woman from a satellite election station who claimed to be monitoring polls as part of the Trump campaign.

Of this, Trump said during the debate,

As you know, today there was a big problem. In Philadelphia, they went in to watch. They’re called poll watchers, a very safe, very nice thing. They were thrown out. They weren’t allowed to watch. You know why? Because bad things happen in Philadelphia. Bad things. And I am urging my people.

However, satellite stations — where mail-in ballots can be requested, completed and submitted — are distinct from polling booths. Officials do not certify poll watchers to enter and surveil satellite stations.

Trump’s summoning of poll watchers isn’t unique to this year; in 2016, too, Trump called for his supporters to stake out polling places. White supremacists and neo-Nazis responded with plans to monitor the polls, but did not mobilize in force.

The grassroots coalition isn’t taking chances this year. “With the stakes being as high as they are, voter suppression already more rampant than ever, and the nationalist right emboldened by conspiracy theorists and the President himself, we can’t depend on anyone else ensuring people are able to vote freely and safely,” organizers wrote in a description of their three-pronged virtual training series.

In 2016, too, Trump called for his supporters to stake out polling places. White supremacists and neo-Nazis responded with plans to monitor the polls.

While Trump prepares to scapegoat a loss, Biden expressed faith in the voting process during the debate. “The fact is, I will accept it, and he will too,” he remarked. “You know why? Because once the winner is declared after all the ballots are counted, all the votes are counted, that’ll be the end of it.”

In any other year, this standard response would be reasonable. But Trump’s disregard for the electoral process is characteristic of despots, from Hitler to Mussolini to Belarus’s Lukashenko.

Truthout contributor Mark Bray, an author and historian of human rights, terrorism and fascist movements, says we can’t treat this election as any other. Bray tweeted: “Trump has articulated his plan to mobilize fascists for voter intimidation, reject the outcome of the election, and hold on to power (while not denouncing white supremacy). If he and his followers won’t recognize the vote, then ‘just vote’ is a woefully insufficient response.”

There’s a strong precedent for statements like Trump’s, which sow deep distrust in the electoral process.

“Fascists historically have taken such matters into their own hands since they don’t consider bourgeois elections to be legitimate representations of the national will,” Bray told Truthout. And liberal governments, fearing destabilization and revolution, have historically stepped aside as fascists take over.

Alarm bells often sound too late, Bray says, since the dominant media “is not often attuned to politics outside of conventional elections” and “have no framework to interpret such a threat.… They are ill-equipped to contextualize this threat within the broader fascistic politics of Trump and his supporters.”

Whether Trump’s supporters will disrupt polls on a wide scale this time around remains to be seen. But, from Trump’s “joking” about holding power beyond his term limit, to enfeebling the integrity of mail-in ballots without evidence, it’s clear that voter intimidation may be the tip of the iceberg of what’s to come.

Truthout urgently need your help to tackle the challenges this country is facing — from increasing racism and police violence to attacks on democracy and the fight for the White House.

Please do what you can so we can amplify the voices of hundreds of journalists, activists and changemakers working tirelessly to turn things around. Donate Now