Paulo Freire’s Pedagogy of the Oppressed at Fifty 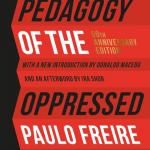 The teacher was holding forth. Hired by the Brazilian government to set up a workers’ literacy program, he waxed progressive to an audience of fisherman, peasants, and urban workers on why, according to the Swiss psychologist Jean Piaget, they should not beat their children. He was pleased with his lecture as he delivered it—a pretty lucid and engaging explication, if he did say so himself. Then a worker raised his hand to ask some questions.

“We have just heard some nice words,” the man said, politely but pointedly addressing the teacher as “Doctor.”

“Fine words. Well spoken… do you know where people live, sir? Have you been in our houses, sir?”

The worker described his own living conditions: his kids were “dirty, crying, making a noise… And people have to get up at four in the morning the next day and start all over again… If people hit their kids, sir, it’s because life is so hard they don’t have much choice.”

The teacher was the Brazilian educator and thinker Paulo Freire. As Raff Carmen, a scholar and practitioner of adult education, would write decades later in an obituary of Freire, the confrontation “stood out as the cathartic moment shaping Freire’s thinking about progressive education: even when one must speak to people, one must convert the ‘to’ into a ‘with’ the people.” The moment captured something vital about knowledge: it comes from lived experience —the teacher cannot just dictate from on high. In that moment, Freire realized that although his intentions in giving his Piaget lecture had been progressive, his pedagogy was not: he had treated his students as empty vessels—or as he would later write, vaults in a bank—waiting to be filled, not as interlocutors or partners in the learning process. He had not understood that he and his students were co-creators of knowledge; in dialogue, they would learn from one another.
The book that made these insights famous, Pedagogy of the Oppressed, was published in Portuguese in 1968, and in English in 1970, fifty years ago. For a book infused with Hegel from cover to cover, and peppered with footnotes invoking Frantz Fanon, Erich Fromm, Karl Marx, and Chairman Mao, it has been surprisingly popular and enduring. More than a million copies have been sold worldwide since the 1970 English translation. Pedagogy has achieved more global fame than any other book translated from Portuguese. On a visit to Greece, a street vendor once approached Freire holding a copy of the book, asking for his autograph, and telling Freire his work was “very important in my country.” Such scenes were repeated around the world in every country Freire visited.

Paulo Freire, born in 1921, was the son of a police officer. He grew up in the northeastern city of Recife, in the state of Pernambuco, which was Brazil’s poorest region. At the time, northeast Brazil was semi-feudal: run by a small group of wealthy landowners, and largely populated by extremely impoverished, illiterate peasants. Although Freire’s family was middle class, they experienced hardships, including periods of hunger through the Great Depression and the loss of Freire’s father in 1934. Throughout his teenage years, Freire struggled to get an adequate education. Eventually he did, however, complete his university studies, and worked in a government-led literacy campaign.

That program grew out of a peasant uprising in that part of the country, pressing for land reform, better education, decent living conditions, and job opportunities. While Freire was a radical, as were the movement’s leaders, this uprising enjoyed support from some in Brazil’s capitalist classes, because improving the lot of the peasants in the northeast would open up the region as a consumer market and also allow more industrial development.

In 1963, Freire became head of Brazil’s National Commission of Popular Culture, under the liberal-populist government of João Goulart, who moved dramatically to the left once in power in response to popular movements. Policies to help the poor—including opening the franchise to people who couldn’t read—enraged many among the country’s upper and upper-middle classes. A right-wing dictatorship came to power in a military coup the following year, and Freire was thrown in prison by the new regime, which viewed mass literacy and political participation as a threat. After his release from prison, Freire went into exile for years, returning in 1980 and eventually accepting a position as secretary of education for the state of São Paulo. During his exile, he wrote the book that would make him Brazil’s most famous global intellectual.

Pedagogy of the Oppressed was hugely influential on educators in the Third World struggling under conditions of mass illiteracy and poverty similar to those Freire described. Of course, many people who read the English translation of Pedagogy didn’t know much about the context of peasants engaged in class struggle in rural Brazil. But the book’s enthusiastic reception had a global context, too: the worldwide struggles for human liberation of the late 1960s and early 70s—Black civil rights, feminism, resistance to domination of poor countries by rich ones—may explain the book’s appeal at the time of its publication. However, its enduring popularity and influence attests to another, even more intractable context: even as many more people around the world have access to education, schooling everywhere remains intertwined with systems of oppression, including racism and capitalism, and traditional models of top-down education don’t work well for everyone.

At the time of the book’s publication, there was also a movement for more open and more democratic schooling, especially in the English-speaking world. Pedagogy was embraced by—and influenced—educators active in this movement. Teachers influenced by that period continue to use Freirean methods in the classroom. A University of Georgia graduate student wrote a 2013 dissertation about three local middle school teachers trying Freirean methods for the first time. The students learned math, for instance, by coming up with their own solutions to problems facing their local government’s economy, water supply, and school budget. In a discussion on poverty, one social studies teacher observed in a later interview with the researcher, when some students said that they weren’t interested in the topic because it was a person’s own fault if they were poor, she would in her normal teaching practice have allowed those students to abstain from the discussion, or told them they were wrong and explained why. But instead she put them in small groups, in which children had a variety of experiences with poverty, allowing them to educate one another on the subject. The teachers agreed that in all these Freirean lessons, the students were far more engaged than with traditional pedagogy (but also, sadly, observed that the current incentives and pressures of standardized testing would make it difficult to teach this way all the time).

The book has drawn criticism over the years. Brazil’s current right-wing government has been doing its best to eradicate Freire’s influence from that country’s universities, using the bogeyman of Freirean leftist indoctrination as an excuse to defund social science departments and persecute left-wing professors. But the anti-Freirean ravings of Jair Bolsonaro, Brazil’s far-right president, may actually be good publicity for this decades-old volume: in Brazil, book sales of Pedagogy of the Oppressed increased by 60 percent from 2018 to 2019. As Freire’s widow recently remarked, Bolsonaro is “encouraging the sale of Paulo’s books!”

Less doctrinaire conservatives than Bolsonaro have argued that the main purpose of education should be the mastery of specific subject matter, like math or history, not societal transformation. Other critics have questioned the implication that peasants—or any oppressed people—should be educated differently than elites. Some on the left, for example, have pointed out that during the twentieth century, in the Soviet Union and other communist countries, giving the working-class the same classical, “top-down” education that the children of aristocracy had previously enjoyed worked well, perhaps one of history’s more successful experiments in mass education.

Others have criticized the inaccessibility of the book’s language; words like “praxis” and “antidialogical” and “dialectic” aren’t household words for most “oppressed” people, and Freire doesn’t use many concrete examples to illustrate his arguments. (There is, however, one action-packed anecdote about some peasants kidnapping a landowner and holding him hostage.) Feminists like bell hooks have bristled at Freire’s use of sexist language: he used male pronouns for pupils and teachers. To Freire’s credit, he responded respectfully to this latter criticism—as hooks and others have reported—and later English translations of the book have been updated with more inclusive and universal language.

Despite such objections, educators have continued to find Pedagogy of the Oppressed relevant and to adapt its arguments to their contemporary context. In 2008, about ten years after Freire’s death, in a special issue of the Journal of Thought dedicated to his ideas, for example, Cal State education professor A. Dee Williams has used the book to argue for the integration of hip-hop into the urban classroom.

One odd aspect of the book’s legacy—at least in its English translation—is its popularity in contexts in which students are not oppressed. In an article provocatively titled “Pedagogy of the Privileged,” the philosopher Tracey Nicholls, writing in the CLR James Journal (which is named for a Trinidadian Marxist), for a special issue on bell hooks, grappled with the paradox that, because higher education is still so class-segregated in the United States, radical American educators have found themselves teaching Pedagogy of the Oppressed—and its methods—in colleges and universities for the elite, contexts where students may be more likely to be oppressors. While Freire viewed the purpose of education as the liberation of the oppressed, in elite classrooms, Nicholls observes, the challenge for a liberatory pedagogy is to teach empathy and solidarity with the oppressed—who, in many cases, are not in the room.

In 2018, there was a wave of celebration of the book’s impact. Journals devoted special issues to it. UCLA Library marked the occasion with a weeklong exhibition on the book, its author, and examples of contemporary critical pedagogy at UCLA. Events with guest speakers were held at Santa Monica College, in Los Angeles County, and many other colleges and universities around the world. Dublin City University, in Ireland, dedicated a day to reflection on the book, drawing teachers and activists from all over Ireland (the podcast of that event is available online).

A contributing writer to the Nation magazine and a columnist for Jacobin, Liza Featherstone has also written for The New Republic, The New York Times and many other publications. She is the author of several books, most recently Divining Desire: Focus Groups and the Culture of Consultation (OR Books/Counterpoint, 2018).