How Much Would it Cost Consumers to Give Farmworkers a Significant Raise? 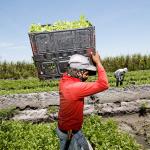 The increased media coverage of the plight of the more than 2 million farmworkers who pick and help produce our food—and whom the Trump administration has deemed to be “essential” workers for the U.S. economy and infrastructure during the coronavirus pandemic—has highlighted the difficult and often dangerous conditions farmworkers face on the job, as well as their central importance to U.S. food supply chains. For example, photographs and videos of farmworkers picking crops under the smoke- and fire-filled skies of California have been widely shared across the internet, and some data suggest that the number of farmworkers who have tested positive for COVID-19 is rivaled only by meat-processing workers. In addition, around half of farmworkers are unauthorized immigrants and 10% are temporary migrant workers with “nonimmigrant” H-2A visas; those farmworkers have limited labor rights in practice and are vulnerable to wage theft and other abuses due to their immigration status.

Despite the key role they play and the challenges they face, farmworkers are some of the lowest-paid workers in the entire U.S. labor market. The United States Department of Agriculture (USDA) recently announced that it would not collect the data on farmworker earnings that are used to determine minimum wages for H-2A workers, which could further reduce farmworker earnings.

This raises the question: How much would it cost to give farmworkers a significant raise in pay, even if it was paid for entirely by consumers? The answer is, not that much. About the price of a couple of 12-packs of beer, a large pizza, or a nice bottle of wine.

The latest data on consumer expenditures from the Bureau of Labor Statistics (BLS) provides useful information about consumer spending on fresh fruits and vegetables, which, in conjunction with other data, allow us to calculate roughly how much it would cost to raise wages for farmworkers. (For a detailed analysis of these data, see this blog post at Rural Migration News.) But to calculate this, first we have to see how much a typical household spends on fruits and vegetables every year and the share that goes to farm owners and their farmworker employees.

Data from the U.S. Department of Agriculture’s Economic Research Service show that, on average, farmers receive less than 20% of every retail dollar spent on food, but a slightly higher share of what consumers spend for fresh fruits and vegetables. Figure A shows this share over time for fresh fruits and vegetables: Between 2000 and 2015, farmers received an average 30% of the average retail price of fresh fruits and 26% of the average retail price of fresh vegetables (2015 is the most recent year for which data are available). This means that average consumer expenditures on these items include $173 a year for farmers (0.30 x 320 = $96 + 0.26 x 295 = $77).

To illustrate, that means that farm owners and farmworkers together receive only about one-third of retail spending on fruits and vegetables even though most, and in some cases all, of the work it takes to prepare fresh fruits and vegetables for retail sale takes place on farms (the exact share of the price farmers receive varies slightly by crop). For example, strawberries are picked directly into the containers in which they are sold, and iceberg lettuce is wrapped in the field. Consumers who pay $3 for a pound of strawberries are paying about $1 to the farmer, who pays one-third of that amount to farmworkers, 33 cents. For one pound of iceberg lettuce, which costs about $1.20 on average, farmers receive 40 cents and farmworkers get 13 of those 40 cents.

So, what would it cost to raise the wages of farmworkers? One of the few big wage increases for farmworkers occurred after the Bracero guestworker program ended in 1964. Under the rules of the program, Mexican Braceros were guaranteed a minimum wage of $1.40 an hour at a time when U.S. farmworkers were not covered by the minimum wage. Some farmworkers who picked table grapes were paid $1.40 an hour while working alongside Braceros in 1964, and then were offered $1.25 in 1965, prompting a strike. César Chávez became the leader of the strike and won a 40% wage increase in the first United Farm Workers table grape contract in 1966, raising grape workers’ wages to $1.75 an hour.

What would happen if there were a similar 40% wage increase today and the entire wage increase were passed on to consumers? The average hourly earnings of U.S. field and livestock workers were $14 an hour in 2019; a 40% increase would raise their wages to $19.60 an hour.

For a typical household or consumer unit, a 40% increase in farm labor costs translates into a 4% increase in the retail price of fresh fruits and vegetables (0.30 farm share of retail prices x 0.33 farm labor share of farm revenue = 10%; if farm labor costs rise 40%, retail spending rises 4%). If average farmworker earnings rose by 40%, and the increase were passed on entirely to consumers, average spending on fresh fruits and vegetables for a typical household would rise by $25 per year (4% of $615 = $24.60).

Many farm labor analysts consider a typical year of work for seasonal farmworkers to be about 1,000 hours. A 40% wage increase for seasonal farmworkers would raise their average earnings from $14,000 for 1,000 hours of work to $19,600. Many farmworkers have children at home, so for them, going from earning $14,000 to $19,600 per year would mean going from earning about half of the federal poverty line for a family of four ($25,750 in 2019) to earning about three-fourths of the poverty line. For a farmworker employed year-round for 2,000 hours, earnings would increase from $28,000 per year to $39,200, allowing them to earn far above the poverty line.

If average farmworker earnings were doubled (rose by 100%) through increased spending on fresh fruits and vegetables, a typical household would see costs rise by $61.50 per year (10% of $615). That extra $61.50 per year would increase the wages of seasonal farmworkers to $28,000 for 1,000 hours of work, taking them above the poverty line for a family of four.

Daniel Costa is an attorney who first joined the Economic Policy Institute in 2010 and was EPI’s director of immigration law and policy research from 2013 to early 2018; he returned to this role in 2019 after serving as the California Attorney General’s senior advisor on immigration and labor. Costa’s areas of research include a wide range of labor migration issues, including governance of temporary labor migration programs, both high- and less-skilled migration, worksite enforcement, and immigrant workers’ rights, as well as farm labor, global multilateral processes related to migration, and refugee and asylum issues.

Costa has testified on immigration before the U.S. Congress and state governments, been quoted and cited by many major news outlets, and appeared on radio and television news. His commentaries have appeared in publications like The New York Times, Roll Call, Fortune, La Opinión, and others, and he was named one of “20 Immigration Experts to Follow on Twitter” by ABC News. Costa is currently a visiting scholar at the Global Migration Center at the University of California-Davis, and was previously a visiting scholar at U.C. Davis, School of Law (2019-2020) and an affiliated scholar with the University of California-Merced (2015-2017).

Prior to his tenure at EPI, Costa worked on developing the legal and normative framework for disaster response and humanitarian relief operations with the International Federation of Red Cross and Red Crescent Societies in Geneva, Switzerland, and completed the International Law Seminar with the UN International Law Commission. He was also a policy analyst at the Great Valley Center, a former University of California think tank, where he managed an immigrant integration program.

Philip Martin is Professor of Agricultural and Resource Economics at the University of California, Davis. He edits Rural Migration News, has served on several federal commissions, and testifies frequently before Congress. He is an award-winning author who works for UN agencies around the world on labor and migration issues. His latest book is Merchants of Labor: Recruiters and International Labor Migration, a pioneering analysis of recruiters in low-skilled labor markets explaining the prominent role of labor intermediaries, from Oxford University Press.

Join with EPI to build an economy that works for everyone.
We need your help in order to continue our work on behalf of hard-working Americans. Our donors value our high-quality research, reputation for truth-telling, and practical policy solutions. Your tax-deductible gift to EPI makes you an important partner in providing this critical public service.