Short of a General Strike, How Can Labor Stop Trump From Stealing the Election? 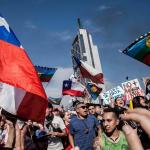 A rare bright spot in the endlessly discouraging 2020 news cycle was the triumph of ordinary people in Chile voting overwhelmingly on October 25 to rewrite their Constitution. A supermajority of Chilean voters, 78 percent, voted to scrap their country’s dictatorship-era, neoliberal Constitution and start over with a new vision of democracy. Chile’s trade unions played a big role in the get-out-the-vote effort. More importantly, millions of workers in Chile waged a series of massive strikes in 2019 across key sectors of the country’s economy. Those strikes played a decisive role in forcing the plebiscite. In the fall of 2019—when the Chilean president balked at demands by students and women’s groups for a bottom-up process to create a new Constitution—construction, dock, education, airport, mining, agricultural, and other workers all walked off the job in support of broad social demands for a better democracy.

There has been a lot of social media chatter about a general strike here in the United States if the results are ambiguous and Trump tries to steal the election. It would be amazing if national trade unions here were prepared to take the same actions in November 2020 that Chile’s national unions took in November 2019—but there’s absolutely no indication that people in positions of power in significant sectors of the US economy are ready to act as boldly as Chilean leaders did. Even if a presidential coup warrants a general strike, achieving one as early as next week is wishful thinking. As a campaign strategist, union organizer, and veteran of both the 2000 Florida recount and many supermajority workplace strikes, I believe it is urgent to remain deadly serious and sober about the actual possibilities when it comes to defending what’s left of our modicum of democracy.

The last time the United States was rocked by the kind of strikes that could shut down the nation was just after World War II. Many workers who took part in the 1945 and ’46 strikes worked in sectors whose jobs have long ago been automated or shipped to other countries. At the national level now, there’s been just one elected leader who has repeatedly mentioned the phrase “general strike”: Sara Nelson, the president of the Association of Flight Attendants. According to Nelson in a recent phone call, “Are unions ready? No. But are we theoretically capable? Yes.” Getting from capable to reality is a pressing project, for 2021, 2022, and throughout the next national administration—no matter who is in power.

What is possible now, and entirely likely, is that workers at a more local level across the country will take action—including strikes. Two Area Labor Councils, in Rochester, N.Y., and Seattle, have embraced a call for strikes if a coup is in the works. Aside from these councils, local unions can demand that their national unions break with the Democratic Party leadership in terms of strategy. Many regional and local unions are already engaged with social movement partners in a variety of efforts, including through the Working Families Party, in planning for massive direct action if Trump follows through on his threat to falsely claim he is the winner on election night, even if huge numbers of votes have not yet been counted.

But it’s crucial that we learn several key lessons from the disaster in 2000. As one of the first organizers to land in Palm Beach County the morning after the election in 2000 (and among the last to fly out from there over a month later, after the coup), I know that good legal strategies help, but they are no match for the forces behind Trump. In fact, some of the same forces that drove the illegitimate conclusion in the 2000 election are working the Trump rule-by-minority today, too. (Not to mention the fact that three members of George W. Bush’s legal team, John Roberts, Brett Kavanaugh, and Amy Coney Barrett, now sit on the Supreme Court.)

It was the Republicans and not the Democrats in 2000 who firmly understood that legal actions, outcomes, and even court rulings are not made in a vacuum but are hugely influenced by the broader social and political context in which they take place. In Florida in 2000, the Republicans seized the space the Democrats ceded, creating an escalating series of actions in the streets, allowing them to craft and drive a narrative that it was Gore—not Bush—who was a sore loser and who was stealing the election. Of course, with Trump, that level of bold deception and media-grabbing is the norm. Hence the first key lesson: It will be vital that people take to the streets immediately, the night of and day after Trump’s declaration of victory—and every day for as long as needed—to create the narrative that this time (too), it’s the Republicans who are out to steal the election.

The second key lesson is breaking with official Democratic Party officials who almost always prefer backroom dealmaking to strategic direct action. That ingrained behavior handed the loser the presidency in 2000. The election next week may well produce a dozen Florida recounts simultaneously. And in some of the most strategic swing states—the ones Trump and Biden are crisscrossing by the day, including Pennsylvania, Michigan, and Wisconsin—unions continue to hold unique power, so bold action by local unions and rank-and-file members in those few key states could decide the fate of the election.

A third key lesson, according to Becky Bond, a veteran presidential campaigner adviser who, along with two others, Brandon Evans and Zack Malitz, wrote The Count, a smart guide to strategy in a contested election: “The reality of the current situation, with Trump and his allies breaking rules and norms faster than anyone can keep track of, is that Democratic Party leadership might have to create a constitutional crisis in order to avert a far larger and more serious constitutional crisis.” For example, Democratic governors in swing states—if it is clear Biden actually won the votes in their state—should disregard actions by their Republican state legislatures and certify Biden’s victory regardless of what the courts say about when counting does or doesn’t stop. These kind of strong power moves by Democratic officials are unlikely unless there is massive pressure from below, from their constituents.

Finally, and the fourth key lesson, there’s another crucial role for unionists, who are used to picket lines and nasty employers and their thugs. Trump has the Proud Boys and other assorted white nationalists on standby. He will be deploying these racist forces to try to stop all the votes from being counted. Our side—and this is a definite role for the already organized forces in the trade union movement—needs to overwhelm these racists with tens of thousands of our members, who will assure the safety of the ballot-counting locations as well as of the ballot counters themselves. As someone who was followed by neo-Nazis from the counting room in West Palm Beach to my hotel one night in an effort to intimidate me during the Florida recount, I can tell you that I needed security then. This year’s counters, poll workers, and others officially involved with the election also need people to help them stay safe, especially when the law and law enforcement fails them.

Everything is on the line with this election. We know that already. Every person reading this article and everyone you know must be prepared to take to the streets—but to do so with a plan, whether that be with coworkers, neighbors, or friends and family, to sustain the level of direct action to fight for a better democracy and a lot more justice.