The Left Must Hit the Streets Again—Right Now 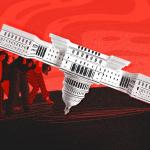 Enough about Donald Trump: The opportunity to plan beyond him is among the most important privileges the Democratic Party and the country won last week. Unless Democrats sweep the Georgia runoffs in January, President-elect Joe Biden will take office with a divided Congress and beset by existential crises on all sides. Having won a general election dominated almost entirely by matters of character and general competence, Biden is substantively short of where he ought to be on the issues that defined the Democratic primary and are likely to define the next decade or more of American life. After the celebrations subside, he’ll be met with a public that will be roiled by the forces of reaction and dismayed by his inability to deliver the political comity and stability he has promised them. Biden might have been the man for the moment, but the moment might not last through spring. It is passing as we speak.

This is the fundamental problem with debates over whether and how to “push Biden left”: There’s no reason to believe he will be the central agent of all that’s set to happen over the next four years, especially if Republicans keep the Senate. Even under the strongest presidents, the American policy regime is ultimately the handiwork of a vast constellation of additional actors. Senators, congressmen, governors, state legislators, mayors, judges, major corporations, civil servants and administrators, interest and advocacy groups—each category contains pivotal figures, spheres of influence, and reserves of independent power. The policy fights ahead will be complex; if the reasons to expect a wave of sweeping change were strained before the election, they are entirely broken now. What’s needed is an approach capable of directing activists and an engaged public toward the right pressure points on the right issues at the right times.

What’s needed, in short, is a movement. Fortunately, and despite what the moderates licking their wounds are telling themselves now, the left has one. Bernie Sanders, a socialist, won nearly 10 million votes against a field of 29 candidates in this year’s primary; in state after state, polls established him as the preferred candidate of not only the very young but all Democrats under the age of 45. The coalition he crafted wasn’t large enough to win him the nomination. But it remains a force to be reckoned with, all the same. Two months ago in Massachusetts, a state whose centrist Republican governor boasts a nearly 90 percent approval rating among Democrats, progressive activists torpedoed a Kennedy Senate campaign—proof positive that the left has muscle to throw around beyond municipal politics and urban House primaries.

But the next major elections are a while off. Activists need to devise strategies for shaping the policymaking process in the interim, as bleak as things seem—to plan not only for the next two to four years, but the next two to four months. It should be obvious by now that direct action, on a scale and at a pitch this country hasn’t seen in half a century, will be absolutely critical. Climate, health care, inequality, immigration, policing, reproductive freedom, the American war machine, labor rights, our civil and democratic rights, the power and perversity of the Republican Party as an institution: Each of these issues should be met with a wave of organizing inspired by our remarkable past decade in mass protest, which culminated dramatically with the demonstrations against the killing of George Floyd earlier this year.

Two campaigns early in the decade—Occupy Wall Street on the left and the Tea Party on the right—created narrative shifts that would ultimately lead to transformative presidential campaigns. But we’ve also seen many others, such as the Fight for $15, Ferguson, Parkland, and others, that capably illustrate how important policy victories at multiple levels of government and shifts in the policy discourse might be achieved outside the auspices of electoral politics. It should not have been a surprise, particularly to those who remembered or participated in the demonstrations against the Keystone XL and Dakota Access pipelines under the Obama administration, that an old-fashioned sit-in managed to put the Green New Deal on the map politically in 2018. That year also saw nearly half a million Americans participate in work stoppages, including thousands of teachers who successfully launched strikes for pay raises in West Virginia and Arizona, two states whose conservative Democratic senators may hold the fate of Biden’s legislative agenda in their hands in the event that the party prevails in Georgia.

It was fascinating, over these last few weeks of the campaign, to see the concept of resistance solidify into something a touch more serious: the notion that the election would not or could not be stolen if a sufficient proportion of the public rose up against the president to defend American democracy. The fact that this may not have been true shouldn’t diminish the significance of a substantial segment of the American public believing it—of millions of people taking it entirely for granted that our institutions cannot solely be relied upon to deliver just outcomes and that mass action can bring the system to heel.

The left, if possessed of the same faith, can become a conduit for that energy. It would be a mistake to lean instead into a kind of demographic triumphalism—the hope that the right torchbearer will arrive in 2024, 2028, or, God forbid, 2032 to lead an ascendant socialist majority to victory in a presidential election. The climate crisis, for one, won’t wait for that majority to emerge. Politics should never be practiced with the expectation of ideal conditions. There will be no messiah. No one will be capable of doing more for us than we’ve already made possible by our own hands. We should believe in no one more than we believe in ourselves.⁠ And our work—organization, agitation, action—should begin this very second. There’s no time to lose.

[Osita Nwanevu is a staff writer at The New Republic. @OsitaNwanevu]