Unions Worry Uptick in Automated Jobs Will Go Beyond Pandemic 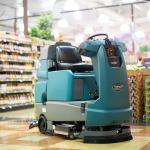 For decades, the attitude of unions and their advocates to increased automation could be summed up in one word: no. They feared that every time a machine was slipped into the workflow, a laborer lost a job.

The COVID-19 pandemic has forced a small but significant shift in that calculation. Because human contact spreads the disease, some machines are now viewed not exclusively as the workers’ enemy but also as their protector. That has accelerated the use of robots this year in a way no one expects to stop, even after the virus is conquered.

“If you keep me six feet away from the other worker and you have a robot in between, it’s now safe,” said Richard Freeman, a professor of economics at Harvard University, who studies labor. “And the robot companies are selling that as a solution and the unions aren’t going to say, ‘No, you should have the workers standing next to each other so they get sick.’ ”

The result is the spread of windshield-mounted toll detectors, automated floor cleaners at factories, salad-chopping machines in grocery stores, mechanical butlers at hotels and electronic receipts for road pavers. What remains less clear is where the men and women who used to do some of those jobs will work. The impact of technology on employment has been a topic of anxiety and study for generations with mixed results. Cars didn’t kill trains, television didn’t end radio. When banks installed ATMs, they hired more people, not fewer, because the variety of their services grew. But machines have eliminated many jobs, and the current wave will prove to be no exception, especially with public health a top concern.

“When we come out of this crisis and labor is cheap again, firms will not necessarily roll back these inventions,” David Autor, an economist at the Massachusetts Institute of Technology, said at a September webinar of the Federal Reserve Bank of Philadelphia. “These are kind of one-way transitions.”

“In the auto industry, we see COVID-19 accelerating transformation toward digitization,” said Georg Leutert, who heads the automotive and aerospace industries at Geneva-based IndustriALL Global Union. While the transition is unavoidable, workers are nervous and need help with up-skilling and re-skilling, he said.

Mark Lauritsen of the United Food and Commercial Workers International Union in North America said that in order to avoid the kind of disruption in the meat industry caused by the virus, automation will clearly continue but warned, “If automation is unbridled it’s going to be a threat.”

With office workers at home communicating via remote tools, a knock-on effect is also being felt: bus drivers, sandwich stall owners and janitors are in trouble as their jobs, which support in-office work, diminish. Jobs in administrative support, which includes roles in office buildings, are down about 700,000 since last year, according to November data from the Bureau of Labor Statistics. In addition, the stock market, already biased toward technology companies, has driven investors away from labor-intensive industries in the pandemic.

New automation also seems to be affecting retail jobs. There are 500,000 fewer of them than last November, according to the BLS. Transportation and warehousing are about 100,000 jobs below year-ago levels. Meanwhile, retail sales are at their highest level on record, mostly driven by e-commerce, which often employs more automation than than brick-and-mortar stores do.

The World Economic Forum reported in October that 43 percent of businesses surveyed are set to reduce their workforce due to technology integration while 34 percent plan to expand their workforce for the same reason. By 2025, the time spent on current tasks at work by humans and machines will be equal.

Some argue that turning over repetitive jobs to robots will free up workers to take on new roles in what is now a booming industry — elderly care. There is an urgent need for more workers to look after the “oldest old,” Manoj Pradhan, founder of Talking Heads Macroeconomics, and Charles Goodhart, London School of Economics professor, argue in their book “The Great Demographic Reversal.”

But Marcus Casey, an economist at the University of Illinois at Chicago, says that while some high-skilled workers will be retrained, many low-skilled ones — like toll collectors — won’t, exacerbating inequality.

One case in point: The Pennsylvania Turnpike Commission cut 500 jobs after installing an electronic tolling system in March.

Some companies are preparing for more pandemics, meaning more automation and fewer employees. Lucid Motors, an electric-vehicle startup backed by Saudi Arabia’s Public Investment Fund, has built a 999,000-square-foot electric vehicle factory in Casa Grande, Arizona, where it hopes to start production on a $160,000 EV next year.

“After this pandemic, the next pandemic will show up,” said Peter Hochholdinger, Lucid’s vice president of manufacturing. “We have to put more effort in automation in general assembly.”

“The pandemic has imposed a sense of urgency,” Cariamo said in an interview. “Projects that were already in the pipeline are being sped up.”

In Chile, requests have grown for permits to pilot a wide range of technologies from tire pressure sensors to mining waste reprocessing and autonomous vehicles. Chile’s mining regulator signed an agreement with CNP in October to streamline the permit process.

BHP Group, the world’s biggest miner, has an $800 million program to add 500 autonomous trucks in iron ore and coal mines in Australia and is considering adopting driverless trucks at copper mines in Chile.

Chile’s mining industry employed 201,000 people in September, down 15 percent from last year and the lowest in at least a decade, according to the country’s Mining Council. Meanwhile, production has risen slightly and the council has lowered by 12 percent its projection for the number of mining jobs needed over the next decade.

Recession is a common time for investment in automation because borrowing is cheaper and companies that cut jobs — even if due to automation — can attribute the reductions to the economy and avoid negative publicity, said Ethan Pollack, policy director at The Aspen Institute Future of Work Initiative. The pandemic only adds to the motives, he said.

Currently, Chile, the U.S. and Mexico spend the least on active labor market policies — which are intended to improve job readiness and expand employment — among all countries that belong to the Organization for Economic Cooperation and Development. That isn’t likely to change quickly because health concerns are coming first.

“Politicians are still not paying attention,” Pollack said. “We’re going to be paying the cost for decades if we don’t act now.”

Tax laws also favor automation. U.S. tax on capital — which includes robots and machinery — is about 5 percent, whereas the tax on labor is about 25 percent, according to a study from MIT economists.

President-elect Joe Biden acknowledges the threat of job loss but hasn’t mentioned additional funding or changes to the tax code. He has said his administration will ensure that employers give all affected employees advance notice of technology changes and automation in the workplace, put their employees at the front of the line for new jobs and offer paid skills training.

Casey, the University of Illinois economist, says the more people without work, the greater the risk of social unrest.

“Many of these people are prime-age males who have virtually nothing to do and our social policy directs money away from that cohort by and large,” Casey said. Policy makers are “underestimating the political problem and the social problem that’s going to emerge when we go into a world in which there’s just not enough work to go around.