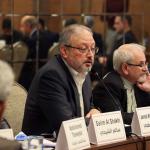 On October 2, 2018, a Washington Post journalist named Jamal Khashoggi walked into the Saudi consulate in Istanbul, for what he thought was going to be a meeting about the paperwork associated with his upcoming wedding. Instead, in what would become an international incident, Khashoggi—one of the most vocal and influential critics of the current Saudi leadership—was murdered and dismembered. The details of the crime are now infamous, with speculation about the extent of Saudi Crown Prince Mohammed Bin Salman’s involvement in the assassination. Bryan Fogel’s documentary The Dissident covers all the well-known aspects of this story, and anyone who doesn’t keep up with the news—or anyone who watches this film years from now—will be fully informed by the closing credits. But Fogel also aims to get into the why of the murder, not just in terms of the motive, but also considering what Khashoggi’s killing says about the state of the world.

Through interviews with Khashoggi’s friends and colleagues, as well as old footage of the man himself, The Dissident paints a portrait of a conscientious reporter with powerful connections. Khashoggi tried to use his insider status to make the Arab world seem less forbidding to the West, while pushing for social reform at home. Because of his reputation as a mainstream journalist with ties to the ruling class, he had a hard time earning trust among younger activists. But Khashoggi eventually became part of their resistance network in the wake of the Arab Spring, and he was gravely disappointed to find that the politicians he’d considered the most socially progressive were unwilling to heed the will of the people.

Meanwhile, Fogel contrasts the last few years of Khashoggi’s life with what was happening at the same time with Mohammed Bin Salman, as the latter began gaining more sway within the Saudi government. These are the parts of The Dissident that ought to be revelatory even to well-informed viewers. The movie suggests the man nicknamed “MBS” has been engaged in a crafty public relations campaign, winning over foreign investors and the Saudi public by making feints toward loosening his country’s cultural and religious restrictions while tightening his control of the government, the economy, and the media.

What emerges from these two parallel narratives is a tale of two men fighting to persuade their people, using the megaphones of mainstream media and social media. According to the experts interviewed in The Dissident, about 80% of the Saudi population is on Twitter. And they use the service as a kind of “people’s parliament,” debating and defining the issues of the day. These same experts insist that MBS has an army of tech-savvy trolls and hackers who steer public opinion and hunt down objectors. Over and over, in his columns and online, Khashoggi argued that the MBS-led initiatives to permit women more freedom or to let more Western popular culture into Saudi Arabia ultimately meant nothing if the people weren’t allowed to express their opinions—what Khashoggi called “the bare minimum” for a functional democracy.

But for all its wealth of detail and thematic ambition, The Dissident is a good documentary that never quite becomes great. Because Fogel spends a lot of this film re-reporting a story that was in all the papers, all over the world, for months, watching The Dissident at times feels like hearing someone summarize a bestselling murder-mystery novel, while ominous “true crime” music plays incessantly on the soundtrack. And while the anecdotes about Khashoggi’s personal life are humanizing, the movie’s pacing slackens a bit whenever Fogel lets the journalist’s friends talk at length about how lonely he was before he met the woman who became his fiancée.

That said, some of Fogel’s digressions are vital. That’s especially true of the third narrative that threads throughout the film: The story of Khashoggi’s colleague Omar Abdulaziz, who fled Saudi Arabia and has since resisted entreaties from MBS emissaries to come home for what they’ve assured him will be a friendly meeting with the prince. When Abdulaziz refused the invitation, his brother and dozens of their friends were arrested. Fogel previously made the Oscar-winning documentary Icarus, about the effect of Russian corruption and disinformation on international athletic competition, and he knows that the real story here isn’t about one slippery would-be despot or one martyr to the cause of free speech. It’s about the frightening flex of authoritarian power happening everywhere right now.

That’s why, alongside the frequent clips of Khashoggi walking into the fateful meeting at the consulate, some of the most frequent visual motifs in The Dissident are images of Donald Trump and his son-in-law Jared Kushner, either meeting with MBS or standing in front of the press to tout the billions of dollars in arms deals they’re negotiating with Saudi Arabia. Even as reliably Trump-supporting politicians like Lindsey Graham and Rand Paul stand in the Senate and decry Khashoggi’s murder, it’s clear no one of consequence will be held accountable for it. A prominent Washington Post journalist was killed, and nearly everyone has a good idea of who’s responsible. Yet nothing will happen, because—according to this fiercely angry film—money protects money.

Lives in Arkansas, writes about movies, TV, music, comics, and more. Bylines in The A.V. Club, The Week, The Verge, The Los Angeles Times, The New York Times, and Rolling Stone.