'A Jim Crow Relic That Must Be Abolished': Demand to End Filibuster Grows 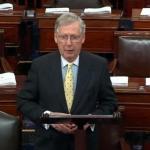 "The filibuster is a Jim Crow relic that must be abolished."

So declared freshman Congressman Mondaire Jones (D-N.Y) on Saturday amid new reporting that some of his fellow Democrats in Congress are "leery" of nixing the antiquated procedural rule in the U.S. Senate makes passing much legislation with less than a two-thirds majority nearly impossible.

The Democrats, who claimed historic wins in Georgia earlier this month to reclaim the majority—however slight—in the U.S. Senate, did so with a vow to put $2,000 survival checks in the pockets of struggling families and turn the tide against the Covid-19 with bold spending to rollout treatments, cash infusions for state and local budgets, an increased minimum wage, expanded unemployment benefits, and moratoriums against utility shutoffs and evictions.

A progressive agenda cannot be enacted without eliminating the filibuster.

According to Saturday reporting by The Hill:

Starting Wednesday, Democrats will control a unified government for the first time since 2010. But the slim 50-50 margin in the Senate is threatening to box in progressive hopes of going big with sweeping policies unless they can convince senators to nix the 60-vote hurdle that would require GOP support for most legislation.

Supporters of going "nuclear" would need the support of every member of the Senate Democratic caucus to get rid of the filibuster, but several aren't on board.

While Sen. Joe Manchin (D-W.V) is seen as possibly the most solid "no" against ending the filibuster, The Hill also names Sens. Jon Tester (D-Mont.), Chris Coons (D-Del.), Kyrsten Sinema (D-Ariz.), and Angus King (I-Maine) as potential GOP allies in neutralizing the party's ability to get their stated agenda passed.

But legislative experts and historians of Congress like Adam Jentleson—a top aide to former Democratic Majority Leader Harry Reid and author of the new book, "Kill Switch: The Rise of the Modern Senate"—says Democrats would be beyond foolish not to realize that the Republican Party has no intention of cooperating to assist with the kind of agenda that Biden ran on, let alone the seminal platform planks—including Medicare for All, the cancellation of student debt, and passage of Green New Deal legislation—that progressives in the Democratic Party have vowed to push with relentless fervor.

"The incentives pushing Republicans to obstruct are so powerful and so immune to everything that's happening right now that they will continue to obstruct," Jentleson, who said what the GOP did to President Barack Obama is exactly what they will to do a President Biden, explained to The Daily Beast in an interview earlier this month.

According to Jentleson, the GOP "see the filibuster as a matter of political survival for them. They benefit from restrictive rules on voting that are applied against people of color and younger voters. They benefit from an electoral map that privileges rural, white states. They have succeeded without representing a majority of Americans because the playing field is dramatically tilted in their favor."

Thank you @MondaireJones for explaining the history. It was a tool advocated by Calhoun literally to protect the interests of slave states. It has nothing to do with our original Constitution or Madison, Jefferson, Hamilton etc. https://t.co/T1CGko9qO1

As for its origins, Jentleson offered a history lesson on the filibuster during an interview with NPR's "Fresh Air" last week:

So the progenitor of the filibuster, its main innovator, was John C. Calhoun, the great nullifier, the leader, father of the Confederacy. And Calhoun innovated the filibuster for the specific purpose of empowering the planter class. He was a senator from South Carolina. His main patrons were the powerful planters. And he was seeking to create a regional constituency to empower himself against the march of progress and against - what was becoming clear was a superior economic model in the North. So Calhoun started to innovate forms of obstruction that came to be known as the filibuster.

It is for this reason, he argued in his talk with The Daily Beast, that the fight in the Senate over the filibuster might come to a head, not over fiscal policy or other domestic agenda items like Covid-19 relief—which can likely be achieved through the reconciliation process that sidesteps a filibuster threat—but rather over efforts to expand civil rights, voting rights, or election reforms—including a possible effort to grant Washington, D.C. statehood.

Our nation desperately needs legislation to ensure free and fair elections and to end the influence of big donors. These reforms have passed the House in the For the People Act and the John Lewis Voting Rights Advancement Act. But there will never be enough Senate Republicans willing to join Democrats to reach the 60-vote threshold needed to break a filibuster on these bills because too many Republicans will simply never agree to unrig a system that keeps them in power.

If we don't act to save our democracy when we have the chance, we may lose it forever. I can only hope that if it comes down to saving the filibuster or saving our democracy, the choice will be clear.

But for a procedural invention that has its roots in racial resentment and the bowels of the Civil War, progressives now warn the future of the nation—indeed, the planet—is imperiled if the filibuster is not destroyed once and for all.

The filibuster is not more important than the future of humanity. Easy choice 🤷🏾‍♂️

"If (Congress) fails to act, as President of the United States, I am prepared to get rid of the filibuster to pass a Green New Deal"

While Biden said during last year's campaign that it might be necessary to "have a look" at ending the filibuster, he has yet indicated if—or how hard—he will press the Democrat's Senate Leader, Chuck Schumer of New York, from implementing what is often referred to as the "nuclear option."

"Do Senate Democrats want to keep the filibuster, or do they want to pass comprehensive democracy, anti-corruption, and voting rights legislation to realize the promise of a multi-racial democracy?" asked Evan Weber, co-founder and political director of the Sunrise Movement asked Friday. "I don't see a way they can do both."