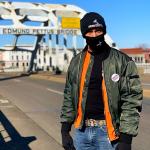 A few years ago I went south on a whim, booking a plane ticket to Dallas and a return flight from Atlanta, giving myself two weeks to make my way across a part of the country I’d never visited before. I rode the Greyhound across the rolling hills of Texas, the forested highways of Tennessee, the moonlit interstates in Georgia. Along the way my trip gained purpose and meaning. What started as a vague stirring to see the lands indelibly branded SLAVE STATES became a solid plan to visit as many monuments and museums documenting a struggle (past and present) for the soul of the United States. Maybe it’s a California boy’s prejudice, but down there I could not but feel as if the ghosts of that struggle were to be found around the next street corner, behind the trees and veils of Spanish moss. Nowhere else has that history felt more alive to me.

Our country was reckoning very publicly once again with police violence against African Americans. Efforts to remove the confederate flag from state buildings and debates on tearing down confederate monuments were in full swing. The day before I arrived in Dallas, five police officers were killed by a sniper during a peaceful protest against the killing of Alton Sterling. I arrived in New Orleans the day after protesters spray painted “Justice 4 Alton Sterling” across the base of a monument dedicated to Robert E Lee.

Here was the land where the seeds of racism and oppression were so deeply sewn and where they manifested in their most horrific forms. Here a building where slaves were held before being sold. Here the stop where Rosa Parks boarded a bus in Montgomery. Here the plantations that grew rich off slave labor. And here Fort Sumter, the first battle ground of the civil war.

Here was the motel where Martin Luther King Jr. was killed.

Even the very busses I rode had their own story to tell, having once ferried freedom riders towards angry crowds and roadside terrorism.

Surrounded by so much evidence of oppression, past and present, it’s easy for those of us not from there to feel like the South will forever be backwards. Forever be that massive red block at the bottom of the map, intractable in its conservatism, an anchor dragging along the ocean floor. A place unworthy of hope.

Four years later I returned, this time for the Georgia Senate runoff election.

And just like last time I came without really thinking much about the greater significance of where I was and why I was there. I thought only of the race’s political importance in the present. I’d gone to Arizona to campaign for Biden in October and I wanted to complete the victory with a win in Georgia. I wanted a democratic agenda to have a fighting chance in Congress.

What came to me later was what the election represented in the arc of American and especially southern history.

On Christmas Day I met a fellow volunteer canvasser in Selma, Alabama and together we walked across the Edmund Pettus bridge. Here, in 1965, marchers including the late John Lewis were beaten and tear gassed by local police while protesting the exclusion of blacks from the polls. It seemed a fitting pilgrimage for those of us who had come all the way to Georgia to join in the long fight against voter suppression.

On New Year’s Day we had the privilege of a private visit to the legacy museum in Montgomery, Alabama, only a two-and-a-half-hour drive from Atlanta. The museum is built into a warehouse that once held slaves. And though tiny it is packed with an overwhelming and stunning display of the ways in which this country did and does wrong by millions of its people. From slavery to mass incarceration the museum documents how the oppression of blacks has evolved over the centuries. And of course, it spends considerable time recounting the terrorism used to keep blacks from exercising their civil rights, voting.

Not far from the museum is the National Memorial for Peace and Justice, a haunting tribute built for the over 4400 African Americans lynched to preserve white supremacy. Metal blocks etched with the names of the murdered and the counties in which they were killed hang from the ceiling, grim stand ins for brutalized bodies. On the walls are some of the “crimes” committed by the dead: filing a lawsuit against local whites, being the relative of someone the lynchers were looking for, not addressing whites with the right words.

This month two Democrats won the Senate seats in Georgia, their campaigns triumphing over a runoff system designed to favor white segregationists, the purging of voter rolls that disproportionately affected the black community, stringent voter ID and signature match laws, the closing of polling places in Democrat leaning counties, and onerous barriers to voting for the formerly incarcerated. It took record turnout and continuous voter registration drives. It took lawsuits against voter purging. It took years of coalition building between many different communities. It took favorable demographic shifts. It took a failed gubernatorial campaign. It took what felt like the entire ground game of the general election descending on one state. It took voters waiting in dauntingly long lines to cast their ballots. It took every last ounce of patience from an electorate who’d had their doorbells rung and phones called multiple times a day for months and months and months as Stacey Abrams encouraged canvassers to “irritate the dickens out of them.”

In short it took maximum effort and commitment on the part of grassroots organizations, campaigns, volunteers and voters alike. They weren’t just fighting against Loeffler and Purdue, Kemp and Trump, they were fighting the segregationists of the mid-twentieth century, the white mobs of Jim Crow. The legacies of the Civil War and the system of slavery it sought to end.

Georgia On My Mind

So here is the tonic for those who despair of overcoming the weight of that history. Yes, the South is the land of the Confederacy, of slavery and Jim Crow. Home to some of the most egregious acts of oppression ever committed. But that legacy belongs to all of the United States. Every part of this country, north south east and west, owes its origin and wealth to our “peculiar institution” as well as other less notorious programs of government sanctioned/ignored exploitation and murder of the poor, immigrants, women. But growing up many (perhaps most) of us learned to identify the South as the repository of all blame. A place we can dismiss with a wave of our “clean” hands. Somewhere we can mark on the map and say, “here there be backwards, unreasonable people.”

Yet in doing so we also dismiss the effort it took to bring the South to this moment. We dismiss the courageous resistance people mounted in the face of the segregation juggernaut. We dismiss the sit-ins, and marches, and court battles, the voter registration drives and public disobedience. We dismiss the planning and organization and face to face conversations and human connection. Georgia remembered those lessons. Georgia acted on those lessons, and when many northern states failed to reject Trump, Georgia did.

And then did it again.

The joy of this victory is tempered by the reality that all it delivers is some breathing room for Joe Biden. It is hardly the foundation for a strong, progressive agenda. But it is instructive for those of us on the Left who have mostly stayed out of the political and activist fray. In a year where the blue wave predicted by pollsters and demographics failed to manifest, Georgia offers a vision of how to turn polling numbers into votes.

Nelson Perez-Olney is a IBEW member.