Chicago Teachers Are Voting on Whether to Defy Monday's Reopening Order 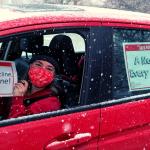 Delegates of the Chicago Teachers Union have just sent a referendum to members: shall we all work remotely starting Monday, January 25?

That’s the date when many were assigned to return to schools. If the district retaliates, delegates will reconvene to take a strike vote.

The plan was voted up by a large majority in an emergency meeting. It’s CTU’s boldest official move yet against reopening; the union has had to walk a difficult legal line.

But militancy has bubbled up from the rank and file. The members who were assigned to return in earlier waves of the mayor’s divisive reopening plan have been organizing their own resistance actions, school by school.

With the pandemic death toll in the U.S. now more than 400,000, Covid positivity rates in Chicago have climbed above 10 percent—double the target rate the city has set for itself—and in some neighborhoods, 15 percent. Yet the city is trying to force its educators back into classrooms.

Clerks were ordered back into the school buildings last fall, followed January 4 by pre-K and special needs educators, followed January 11 by their students, to be followed by an ongoing rollout of returns by grade level.

Educators applying for accommodations under the Americans with Disabilities Act due to their own vulnerabilities or those of household members have been rejected at alarming rates.

The entire system is designed to push individuals to make choices for themselves—do I try to get an ADA exemption, or brave the reopening, or quit?—rather than as a collective. But educators are working through these challenges.

Ana Bolotin, a special education teacher, said she was one of many teachers “who felt alone and did not know how to proceed as we were facing bullying from CPS.” She connected via Facebook with others from across the district who were ready to refuse to go into buildings. “Because of the pandemic, we didn’t know each other in real life. All of the relationships were forged virtually,” said Bolotin.

The group called a Zoom meeting, attended by 30 people, and talked about how they could organize to refuse to enter. Their next meeting had 100. These meetings were designed to support people to go back out and organize actions at their own schools.

Staff members at Brentano Math and Science Academy decided that, beginning on January 4—the date they were ordered back—they would bring their laptops and teach from outside the school building.

And that’s what they did, despite below-freezing temperatures. “We are all scared,” said Pre-K teacher Kirsten Roberts. “All of our families have been directly impacted by Covid—by loss and illness.”

So far only pre-K and special needs educators had been called back, but other Brentano teachers turned up throughout the day to support them.

The next day when Roberts attempted to log on to Google Classroom, she was denied access—to her students, her email, and her pay. Management had blocked her.

At Suder Montessori, educators bought their own protective gear and used a CTU-provided checklist to do safety inspections. Educators at other schools donned masks during remote learning so that parents would have a better idea of what students would be experiencing in the classroom.

Some planned to get appointments to test before returning to school, which would require them to stay out of buildings until the results came back negative.

News reports suggest up to 60 percent of the educators who were told to return did not enter their buildings on the first day back.

That’s when Chicago Public Schools (CPS) announced it would be cutting off access to remote teaching for any educators like Roberts who were, by district rules, supposed to be inside. As of this writing, some are still locked out; an end to the lockout has been added to the union’s demands.

Still the organizing continued. The key, said Bolotin, “was brainstorming ways to increase solidarity and help people see that individual educators needed to support each other.”

Mayors, governors, and other policymakers across the country continue to insist that schools are not sites of Covid infection, even as growing evidence suggests they are wrong. A study in the medical journal The Lancet noted that previous studies showing low or no school transmission had missed asymptomatic students and included schools with low attendance.

Recent reports from around the world suggest that open schools strongly correlate with hospitalizations and community spread. England, Germany, and South Korea initially reopened schools, but have since closed them again in the face of rising positivity rates.

But here in the U.S., where the government has been slow to provide relief for workers, policymakers continue to beat the school-reopening drum. That means educators’ lives are being put at risk—along with the lives of students and their families.

Many of the arguments made for reopening school buildings speak only to the health of students. And some of the most-cited reports of successful reopenings in the U.S. ignore the measures taken—smaller class sizes, robust testing and contact tracing—that are absent in most U.S. schools.

Organizing against the reopenings has been tough for unions. Educators want to do what’s best for students, and everyone can see how inadequate remote teaching is—especially when many families have limited WiFi access and parents are juggling work and childcare. The stream of mixed messages about school transmission hasn’t helped.

CTU has been demanding testing, contact tracing, vaccinations for educators and other school staff, and the enforcement of safety protocols such as adequate protective gear, air-quality systems, and cleaning schedules before educators go back into the buildings.

The union has been holding virtual town halls with educators and providing checklists for building safety. It has garnered the support of 33 aldermen to say it’s not safe to reopen the buildings. Meanwhile, Mayor Lori Lightfoot has refused to negotiate with CTU about the reopening plan.

The Illinois legislature recently passed a law which would make many of the issues involved in reopening mandatory subjects of bargaining. The measure would repeal a section of the Illinois Educational Relations Act passed in 1995 that has allowed the district to refuse to bargain with the union over issues including class sizes, layoffs, subcontracting, and charter schools. That law is now sitting on the governor’s desk, waiting to be signed.

For Dennis Kosuth, a school nurse and Roberts’ partner, solidarity has meant working with members who were both afraid of getting sick and afraid of the district, in varying degrees. “We don’t trust CPS,” he said. So organizing required “finding the place where the person’s fear about the virus and readiness to risk their job met.”

To start, Kosuth struck out alone. He started doing his work outside the school building—checking on students, completing paperwork—and livestreamed it. Over the course of a week, more and more educators stopped by to show support. For him, the present challenge for organizers is, “How do we lead without getting out ahead?”

Kosuth was one of 150 Chicago school nurses who signed a letter to the district saying that schools are unsafe. National Nurses United and the Illinois Nurses Association have backed up their concerns.

While the district is trying to pit parents and teachers against each other, Roberts said the message from the union to students’ families is: “We are exactly like you as workers. We want for you what we want for ourselves.”

At the end of the second week of forced return, some CTU members took personal days off and led a car caravan though the streets of Chicago to City Hall and the homes of members of the Board of Education while a board meeting was in session.

“Lori Lightfoot and the Board of Education seem to want there to be a corrosive atmosphere,” said Roberts. “In any rational world we would have collaboration. But they are creating a situation where our only power is to show them they cannot run the schools without us.”

Now the proposed January 25 stay-at-home is up to a member vote. A strike threat forced the city’s hand back in August and kept schools remote.

Under Illinois law, public sector unions are banned from striking while under a collective bargaining agreement. CTU’s contract expires in 2024. The law also bans the city from locking workers out.

If CTU were to strike, it would be a safety strike. That, notes Roberts, would be uncharted territory.

Barbara Madeloni is Education Coordinator at Labor Notes and a former president of the Massachusetts Teachers Association. barbara@labornotes.org