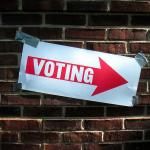 The 2021 legislative sessions have begun in all but six states, and state lawmakers have already introduced hundreds of bills aimed at election procedures and voter access — vastly exceeding the number of voting bills introduced by this time last year.

In a backlash to historic voter turnout in the 2020 general election, and grounded in a rash of baseless and racist allegations of voter fraud and election irregularities, legislators have introduced three times the number of bills to restrict voting access as compared to this time last year. Twenty-eight states have introduced, prefiled, or carried over 106 restrictive bills this year (as compared to 35 such bills in fifteen states on February 3, 2020).

Of course, other state lawmakers are seizing on an energized electorate and persistent interest in democracy reform (which is likewise reflected in Congress). To date, thirty-five states have introduced, prefiled, or carried over 406 bills to expand voting access (dwarfing the 188 expansive bills that were filed in twenty-nine states as of February 3, 2020). Notably 93 such bills were introduced in New York and New Jersey.

Also in reaction to 2020, four states have proposed legislation that would modify how presidential electors are allocated, and eleven states have introduced bills to adopt the national popular vote compact. 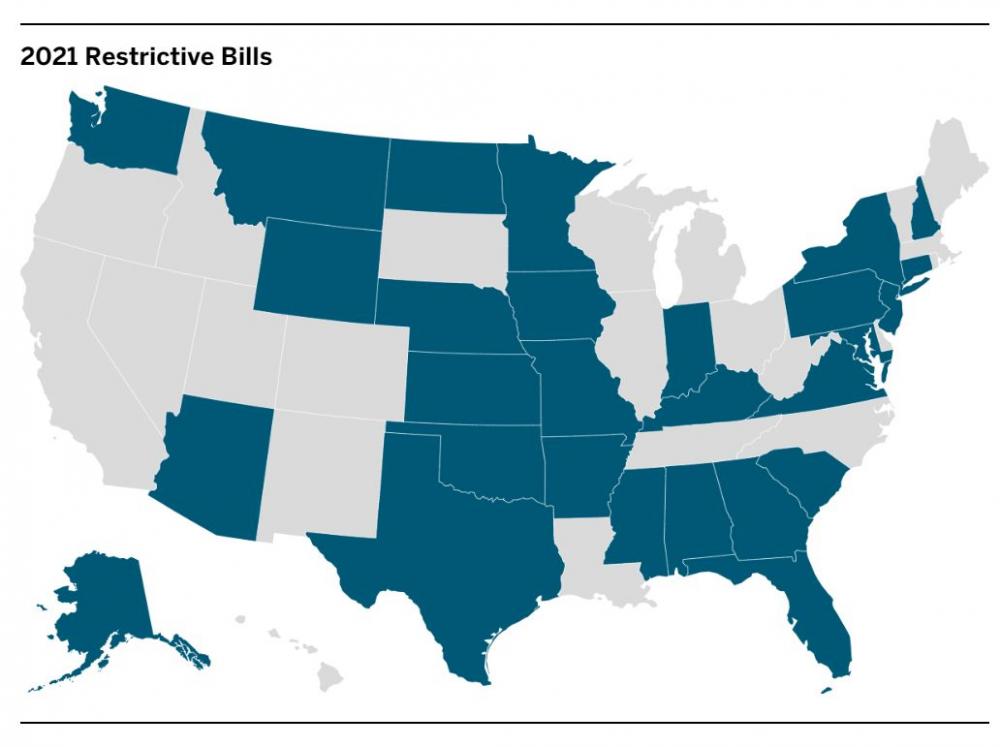 More than a third of restrictive bills introduced this year seek to limit mail voting. Legislators are taking aim at mail voting at every stage, with proposals to circumscribe who can vote by mail, make it harder to obtain mail ballots, and impose hurdles to complete and cast mail ballots.

Limiting who can vote by mail: Five bills in three states footnote1_btwus961 would make the "excuse" requirement more stringent for absentee voting or eliminate “no excuse” mail voting. The Missouri bill, for example, would eliminate Covid-19 concerns as an excuse (MO SB 282), while three different proposals in Pennsylvania seek to eliminate no-excuse mail voting, a policy just adopted in 2019.

Making it harder to obtain ballots: Arizona (HB 2370) and Pennsylvania have introduced bills that would eliminate the permanent early voter list. Two bills in Arizona (AZ SB 1069, AZ HB 2560) and one in New Jersey (NJ AB 4626) would make it easier for officials to remove voters from the permanent absentee list. In addition, New Jersey, Pennsylvania, Texas, and Washington are considering bills to limit who can send absentee ballot applications to voters without an affirmative request. A New York bill (NY SB 1805) would restrict who can submit absentee ballot applications on another voter’s behalf.

Barriers to completing or casting ballots:

In addition to restrictions targeting voters, other bills have proposed limits on ballot counting:

Legislators in 10 states have introduced 18 bills to impose new or more stringent voter ID requirements for in-person voting (either for early voting or election day).

Six states have introduced 13 different bills that would expand voter roll purges or adopt flawed practices that would risk improper purges. For example, three bills in Mississippi would require a comparison of the voter rolls against other databases to identify noncitizens, and would require removal from the rolls of voters who fail to respond to a notice within 30 days with proof of citizenship (MS HB 4, MS SB 2588, MS SB 2577). A New Hampshire bill (NH SB 31) would permit election administrators to remove voters from the rolls based on data provided by other states, a practice that federal courts have found violates the National Voter Registration Act.

State legislators are also proposing policies to expand access to voting. Indeed, of the 41 states with new election bills, 35 states have introduced expansive policies, for a total of 406 expansive bills introduced or carried over into 2021. These bills focus primarily on: (1) mail voting; (2) early voting; (3) voter registration; and (4) voting rights restoration.

Many of these-pro voter reforms have been introduced in states like New York (with 56 expansive bills) and New Jersey (with 37). But a significant number of these proposals have been introduced in states with histories of voter suppression, including Mississippi (39 bills), Missouri (21 bills), and Texas (53 bills) — suggesting that there remains concerted energy around policies that make voting easier, even if passage will be an uphill battle politically. 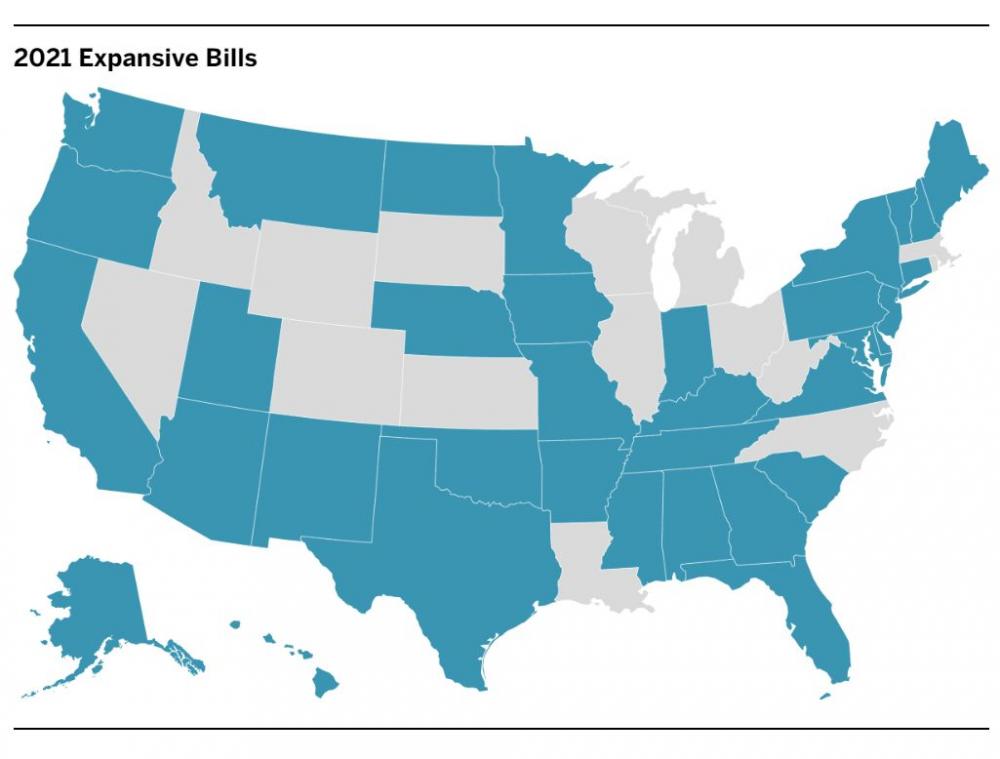 A substantial plurality of bills that expand access relate to mail and absentee voting, with many policies aimed at addressing the challenges that voters and election officials encountered in 2020.

States are also looking for ways to make it easier for voters to get registered.

Momentum continues in support of restoring voting rights to individuals with past convictions. Last year, California voters overwhelmingly passed a constitutional amendment to restore voting rights to everyone in the community and Iowa’s governor issued an executive order that ended the state’s policy of permanent disenfranchisement for those with felony convictions.

This year, 15 states have introduced policies to restore voting rights or ease current restrictions for people with past convictions. footnote16_02d4ann16 Legislators in Mississippi have introduced 12 such bills to expand or restore voting rights. The Sentencing Project estimates that Mississippi disenfranchises over 214,000 citizens living in the community — more than 54 percent of whom are Black — because of past convictions.

In addition to state bills, much attention has been directed to the comprehensive set of democracy reforms laid out in the For the People Act (H.R. 1 in the House of Representatives and S. 1 in the Senate), as well as the John Lewis Voting Rights Advancement Act.

One obvious area of focus for legislatures this year is the manner in which presidential electors are allocated. Currently, only two states — Nebraska and Maine — allocate electors by congressional district on a proportional basis, while the remaining 48 states allocate electors using a winner-take-all system.

Four bills seek to alter these approaches. The Nebraska legislature, for example, has introduced a bill (NE LB 76) to allocate electors using the winner-take-all system. This follows a split of Nebraska’s electoral college votes in the 2020 presidential election,

By contrast, a Wisconsin proposal (WI LRB 0513/01) would allocate electors by district (effectively adopting the current Nebraska model), while a Mississippi bill would appoint presidential electors by district, with two electors chosen at large (MS HB 1183).

An Oklahoma bill seeks to have the state legislature choose presidential electors unless and until there is a federal law requiring voter ID and auditable paper ballots (OK SB 33).

Eleven states have introduced proposals to adopt the national popular vote interstate compact, under which participating states would allocate their electoral votes to the presidential candidate who wins the national popular vote. footnote17_y4usndi17 The agreement would go into effect only if participating states represent an absolute majority of electoral college votes. Maryland has introduced a bill to remove itself from the compact (MD HB 544).

Defend Our Democracy. The Brennan Center for Justice fights to make elections fair, end mass incarceration, and preserve our liberties — in Congress, the states, the courts, and the court of public opinion. Join The Brennan Center in building an America that is democratic, just, and free.