Medicare Expansion Is a Discount Compared to ObamaCare 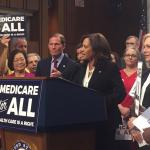 President Biden’s ambitious program to fix American health care will succeed only if health care costs are brought under control. This can only be done with Medicare, which has a scale and simplicity that allow the administrative efficiency and market power needed to control costs.

There are two parts to Biden’s roadmap for health care: building on the Affordable Care Act by increasing the subsidies for private health insurance and expanding Medicare.

While both approaches will increase access, only Medicare has the proven ability to control costs.  Since 2008, private health insurance costs per enrollee have risen almost twice as fast as Medicare by 51 percent — compared to 26 percent per enrollee for Medicare. Inpatient hospital services for private health insurance now cost nearly twice as much as Medicare, outpatient services are more than twice as expensive and physician services are 43 percent more costly.

To make health care affordable, we should move people into Medicare because every person who moves from private health insurance to Medicare lowers our national health care bill.

Biden proposes to move millions onto Medicare. Unfortunately, he would also expand the inefficient and overpriced private health insurance system. He would build on the ACA by expanding subsidies for people to buy insurance on the private exchanges. ACA subsidies have allowed millions of low and middle income households to buy private health insurance. Biden would increase these subsidies and extend them to households with incomes over four times the federal poverty line.

The cost to the federal government is greater for the larger Medicare enrollment. But the real cost to our country for increasing ACA subsidies is the effect on national health expenditures and subsidizing private health insurance increases by nearly $5 billion — while the Medicare program lowers expenditures by at least $25 billion. Actual savings may be even greater because this assumes only a 30 percent cost advantage for Medicare.

Medicare’s efficiency would allow Biden to expand access to health care while restraining spending. By utilizing the cost efficiency of traditional Medicare, he could square the circle that has stymied health care reform for decades.

Now it is time to act, to save money and to save lives.