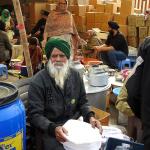 Thousands of farmers in India are braving cold winter temperatures in the outskirts of New Delhi, their tractors and tents blocking traffic along three main roads leading to the capital city, in protest of new agricultural laws that farmers say leave them at the mercy of multinational corporations. The protests, which began in August, morphed into a general strike of 250 million workers on November 26, which has been called the largest-ever global demonstration.

The ongoing demonstrations have struck a chord with agricultural communities in North America, where solidarity protests were held throughout December, including a march to the Indian Consulate in Toronto and a protest outside of Facebook’s headquarters in Menlo Park, California. Demonstrators said Facebook and Instagram have been censoring posts in support of farmers.

At the heart of Indian farmers’ discontent are three new agricultural policies Prime Minister Narendra Modi’s Hindu-nationalist government introduced in June and passed in September. As the Associated Press reported, Modi said the reforms will boost agricultural growth in the country through private investments, doubling farmers’ income by 2022. But protesting farmers say the changes will deregulate crop pricing, pushing small-scale producers to sell to multinational corporations like Walmart.

“A normal farmer who is not well-educated will be left to negotiate with a well-trained and well-educated professional,” IT worker Bhavjit Singh, who grew up in India and now lives in Australia, told Truthout. Singh, who has temporarily returned to India to take care of his father, who is sick, has been running a social media campaign that encourages young people to use Twitter in support of the farmers’ protests. He grew up helping his family grow wheat and rice in Jartauli, a village in Punjab — India’s northernmost state. “A person like my father who doesn’t know anything about negotiation, the prices, the consequences, stands no chance. He will have to accept whatever the corporations are going to offer,” Singh said.

That’s on top of difficulties farmers already face, like climate change-fueled changes in monsoon patterns, and government prices already so low it’s common to lose money on a season’s crop. According to a receipt posted to Twitter documenting the sale, in 2018, a farmer by the name of Basvangauda Gaudar sold 1,890 kilograms of onions for 1,681.50 rupees, the equivalent of $22.84 USD. He said it cost him 2,229.70 rupees to produce the onions, including weighing and transport expenses, after which he ended up with a net loss of 548 rupees, or $7.44 USD.

Many of the protests outside of India have been led by the Sikh diaspora — migrants or the children of migrants belonging to the minority religious group with a strong presence in Punjab — living now in the United Kingdom, Canada and the U.S.

Punjab, which means “the land of five rivers” in Persian, is known for its fertile land. It has become the focus of multinational companies and government agricultural experiments set on maximizing agricultural yield. According to India Today, farmers in Punjab cultivated 11.82 million metric tons of rice in 2015-2016, making it the third top rice producer of India’s 28 states and eight territories.

Naindeep Singh is the executive director of the Jakara Movement, a grassroots youth empowerment organization based in Sikh principles, that helped plan a December 5 rally bringing an estimated 10,000 Sikh Americans from across California to the Bay Area for a socially distanced caravan across the Bay Bridge. “Many of us have family in Delhi who are participating right now, so it was personal,” Singh told Truthout. Singh says the protests were also inspired by Black Lives Matter organizing this year. Plenty of non-Sikh allies showed up in support of Indian farmers too, he said. “Many of our Latinx partners have likened these types of neoliberal laws [to those that] destroyed the rural Mexican economy after NAFTA.”

Like many Sikh Americans, most of whom have agrarian roots by Singh’s estimation, Singh’s family came to the U.S. to escape persecution from the central Indian government in the 1980s. He says the diaspora is acutely aware of the kind of violence the Indian government is capable of. They’re also in touch with the difficulties of farming following decades of neoliberal policies. According to India West, Sikh farmers in California’s Yuba–Sutter area grow two-thirds of almonds and walnuts in the U.S. Singh points out many Sikhs in California have transitioned to truck driving, due in part to agricultural policies that make it challenging to earn a living.

“There is a solidarity here that is extremely powerful between farmers and farmworkers,” Singh says. “Normally you have class and caste cleavages, but right now you have people coming together to say ‘this issue affects us all.’”

The parallels between struggles of Indian farmers and their counterparts in the U.S. are uncanny. Almost 600 U.S. family farmers filed for bankruptcy in 2019, hitting an eight-year high. Suicide rates are on the rise among farmers, though quantifying the crisis has been difficult — the Centers for Disease Control and Prevention retracted a 2018 report attempting to do so because of “coding errors.” According to a USA Today investigation, 450 farmers across nine midwestern states killed themselves from 2014 to 2018. In India, more than 12,000 farmers and agricultural workers committed suicide in 2015, 58 percent of which were said to be linked with bankruptcy, indebtedness or other agricultural problems, according to data from the National Crime Records Bureau.

The two countries also have a parallel agricultural history. India was one of the first countries, along with Mexico and Indonesia, where Ford Foundation and Rockefeller Foundation-financed programs intent on boosting global food output through high-yield varieties of genetically engineered wheat and rice were introduced. The programs initially reduced rural poverty, but as is the case in the U.S., have forced farmers to focus on maximizing output of rice and wheat — beholden to purchasing high-yield seeds and chemical fertilizers that require heavier irrigation and deplete the soil of nutrients that allow for cultivation over the long term.

In spite of the similarities between their crises, the economics of the two countries’ cases also vary significantly. Over half of India’s population finds work in the agricultural sector, many on small family farms. By comparison, less than 2 percent of the U.S. population works on farms, down from 70 percent in 1840.

Whereas U.S. farmers navigate a free market propped up by millions in government subsidies that incentivize fence-to-fence cultivation of cash crops like corn and soybeans, India has maintained a minimum price system under which the central government sets a price floor at state-run marketplaces, so farmers can anticipate the worst-case scenario. While it’s a system that’s far from “rosy,” Naindeep Singh says, gutting the price protection will make a bad situation worse. Bhavjit Singh agrees. “You’re breaking the nerve system of a whole region … it’s not just a farming issue, it’s a cultural issue,” he said.

Looking on From the Fields

Mary Agnes Rawlings is an Illinois farmer who has been trying to break out of the industrial agricultural system in the U.S. to grow organic since the early 2000s. Rawlings has found some hope watching the protests in India. “I would love to join a movement that mirrors the India farmers’ response,” Rawlings told Truthout. She says she would embrace a forum for discussing the shared concerns for generational farmers struggling to keep afloat in what she calls the “industrialized American scene.”

“Our new president is sending as clear a signal as possible that he intends to pursue the status quo in U.S. agriculture.… We need to follow the lead of India’s farmers and make our voices heard.”

But Rawlings is not optimistic that a similar movement might emerge in the U.S. “Not enough American farmers can take their eyes off dwindling crop prices to actually see we are in a system which promotes big business and gives breaks to companies like Monsanto and Bayer to keep pushing their agenda of making more money at the expense of farming,” she said. And now, Rawlings is skeptical of President-elect Joe Biden’s recent nomination of Tom Vilsack for USDA secretary, pointing out how he made almost $1 million in his first year heading Dairy Management Inc., as 1,600 U.S. dairy farmers went bankrupt.

New Jersey seed farmer and co-director of the Experimental Farm Network, Nate Kleinman, shares Rawlings’s concerns, pointing out how Vilsack is snug with agribusiness and minimizes fossil-fuel-intensive agriculture’s contribution to the climate crisis. “Our new president is sending as clear a signal as possible that he intends to pursue the status quo in U.S. agriculture,” Kleinman told Truthout. “And that means this is a time for U.S. farmers to come together and demand the kind of changes we need,” he said. “We need to follow the lead of India’s farmers and make our voices heard. If that means driving our tractors to Washington, D.C., and shutting down the Beltway and Pennsylvania Avenue, well then, so be it.”

If actualized, it wouldn’t be the first protest of its kind in the U.S. In 1978, amid February temperatures, George Naylor, an Iowa grain farmer and former president of the National Family Farm Coalition, joined thousands of farmers who drove tractors across the Great Plains to Washington, D.C., to demand the government end its hollowing out of New Deal-era programs that guaranteed farmers living wages for growing food and serving as stewards of healthy soil. Naylor continues to advocate for a return to what’s called “parity” through a new coalition called Disparity to Parity. “Food has got to be the most fundamental aspect of our existence on this planet,” Naylor said, whereas under the current system, “the lungs of the Earth are being plowed up and bulldozed to plant more corn and soybeans so that more animals can be raised in confinement.”

Yet Naylor, who characterizes the Indian farmers’ protests as “déjà vu,” has a hard time envisioning U.S. farmers mobilizing like Indian farmers are now, and like he did in 1978. “[The industry] has ground farmers down to the point where they have no sense of solidarity. They do not understand that there is an alternative to the policy that we have, because they’ve been propagandized incessantly by the media and farm organizations like the Farm Bureau.”

“If you want rural communities to survive, you have to consider that small farms around them are what support them.”

Fourth generation Wisconsin dairy farmer Jim Goodman is the current president of the National Family Farm Coalition. Goodman recently sold the farm that’s been in his family since the 1840s. As he watches protests continue in India, he says that country’s policy changes harken back to the U.S.’s hollowing out of New Deal farm policies, which Naylor and his fellow farmers protested decades ago.

“If you want rural communities to survive, you have to consider that small farms around them are what support them,” Goodman said. “That’s one of the reasons there’s so much poverty and hunger in rural America — because the small farms are gone.”

White supremacists, conspiracy theorists, and far right extremists have gone unchallenged long enough. The armed rampage at the U.S. Capitol on Jan 6th was not the end of their attacks on democracy. We urgently need to do more to fight against the far right and its violence — while we still can. Please join Truthout in our fury and help us amplify the voices of the authors and activists fighting for our future.

Leanna First-Arai is a freelance journalist who covers environmental and climate (in)justice. Her work has appeared in Undark, Sierra Magazine, Yes! Magazine, Outside Magazine, on New England Public Radio and elsewhere. Follow her on Twitter: @FirstArai.