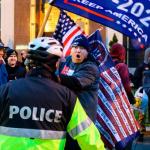 The Pandemic and Amoral Capitalism

We can no longer remain on the surface of the upheavals taking place, considering justice and equality only as a matter of compensation and redistribution, but we must go back to the deep structures that articulate our systems of production.

The Capitol Siege and Police Power

Reinforcing the false sense that law enforcement is politically neutral by granting it even more money and power would be counterproductive to preventing a further rending of the country's social fabric.

To many of them, it felt like no one was in charge of the Capitol’s defense. All they could hear on the police radio were desperate cries for help.

Almost 40 percent of abortions in the United States each year are done with pills—but those are just the ones provided in clinics and other medical facilities. Many others end are sourcing and using the drugs mifepristone and misoprostol on their own.

CNN, Proud Boys and the CPUSA

Dozens of historians and academics have signed a statement to CNN challenging an article published on its website that equated the Communist Party USA with the coup plotters who perpetrated the Jan. 6 insurrection at the Capitol.

The Life and Death of Modern Homosexuality

By Ben Miller
The Baffler

We assume that there is a queer “us”— this idea, of a united queer identity forged in the crucible of decades or centuries of homophobia, often lurks behind even those histories that insist that homosexuality is a modern invention.

Director Shaka King explains how it became possible to make a Hollywood movie about the socialist Black Panther Fred Hampton.

QAnon is the result largely of privileged white people losing their minds because of perceived threats to their social status from people of color and cosmopolitan liberals.

What About the Wall?

Biden temporarily halted border wall funding and construction, but wrapping up Trump’s pet project promises to be a messy and expensive task.

This list focuses on Black women guitarists and bassists whose careers started prior to 1999 to showcase the legends—many of whom have unfortunately been overlooked, dismissed, or forgotten—who should be recognized as pillars of music history.