Introducing ‘Food Grammar,’ the Unspoken Rules of Every Cuisine 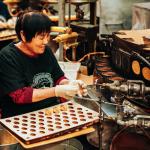 SERVE SPAGHETTI AND MEATBALLS TO an Italian, and they may question why pasta and meat are being served together. Order a samosa as an appetizer, and an Indian friend might point out, as writer Sejal Sukhadwala has, that this is similar to a British restaurant offering sandwiches as a first course. Offer an American a hamburger patty coated in thick demi-glace, and they’ll likely raise an eyebrow at this common Japanese staple dubbed hambagoo.

Each of these meals or dishes feels somehow odd or out of place, at least to one party, as though an unspoken rule has been broken. Except these rules have indeed been discussed, written about extensively, and given a name: food grammar.

Yes, much like language, cuisine obeys grammatical rules that vary from country to country, and academics have documented and studied them. They dictate whether food is eaten sitting or standing; on the floor or at a table; with a fork or chopsticks or with fingers. Like sentence structure, explains Ken Albala, Professor of History at the University of the Pacific, a cuisine’s grammar can be reflected in the order in which it is served, and a grammar can dictate which foods can (or cannot) be paired, like cheese on fish, or barbecue sauce on ice cream.

A culinary grammar can also provide insight into how an assortment of ingredients becomes a meal, much like how a jumble of words becomes a sentence. Many American diners imagine dinner as a plate with a protein, a vegetable, and a starch, followed by a sweet dessert. But for Cantonese diners, writes linguist Dan Jurafsky, author of The Language of Food: A Linguist Reads the Menu, a meal is a combination of a starch, such as rice or noodles, and another element, usually meat, vegetables, or a combo.

“Describing this in English requires the awkward word ‘non-starch,’” writes Jurafksy. The Cantonese word for this, sung, 餸, is so pervasive that “the word for ‘grocery shopping’ in Cantonese is mai [sung], or ‘buying sung,’ since the starch is a staple that would already be in the house.”

Grammars can even impose what is considered a food and what isn’t: Horse and rabbit are food for the French but not for the English; insects are food in Mexico but not in Spain. Moreover, just as “Hey, man!” is a friendly greeting for a buddy but maybe not for your boss, foods may not be suitable in all grammatical contexts. “A Frenchman would think it odd to drink white coffee with dinner and an Italian probably would resent being served spaghetti for breakfast,” writes Claude Fischler in “Food, Self and Identity.” By the same token, rice is appropriate for breakfast in Korea but not in Ireland.

While a culinary grammar is far easier to grasp than a linguistic one, according to Albala, it’s no less impervious to rule-breaking, especially when a dish appears in a new country that imposes a different grammar. But while breaking the rules can perplex some diners, it can also lead to delicious slips of the tongue.

Consider the adjective “hungry” in English, a concept conveyed with the noun hambre in Spanish. By imposing Spanish grammar on the English sentence, you get the phrase: “I have hunger.” Pretty, maybe, but odd. Similarly, someone attempting to recreate a foreign cuisine may find that their native grammar sneaks into their conception of the meal. As a result, trying your home food abroad can prove disorienting: Parisian restaurants may serve a hamburger with a fork and knife; a Japanese restaurant serving yoshoku, or “Western food,” might place croquettes and cabbage rolls in a bento-like box along with tiny portions of pickled vegetables and miso soup. In China, explains Jennifer 8. Lee, author of The Fortune Cookie Chronicles, rice is served after the main and before the soup, making the American-Chinese tradition of serving white rice alongside the main seem as odd to Chinese diners as an English-speaker hearing a foreigner say “old silly fool” instead of “silly old fool.”

Such pairing woes are pervasive in the mistranslation of culinary grammars. In Italy, pasta and rice dishes are served before meat rather than alongside it; in Italian-American restaurants, however, fish is often perched on risotto, and meatballs take their starring place atop spaghetti in the eponymous classic.

The mistranslation “really upsets people,” says Albala. “They just don’t know what to do with it.” (To wit: there’s a whole genre of YouTube video devoted to it.)

Such “mistranslations” are perhaps nowhere more evident than in chain restaurants offering an idealized vision of a foreign land. In his semiotic analysis of the Italian-American restaurant chain Fazoli’s, Davide Girardelli, a communications researcher and faculty member at the University of Gothenburg (Sweden), identifies color codes (red, white, and green) and other stereotypes of “the basic structure of the myth of Italian food in the United States” as strategies to make the restaurant seem more Italian to American diners. But much like someone speaking English with a fake Italian accent, something about the Fazoli’s experience just doesn’t ring true.

Restaurants like Fazoli’s at once denature Italian food and lock it in time. In these spaces, much like on Ocracoke Island, where locals still speak a version of Elizabethan English, cuisines become divorced from the natural progression back home. At Fazoli’s, writes Girardelli, “Italy is depicted as a place inhabited by huge and fertile families, a country that is ‘frozen’ in a rural preindustrial reality, where the produce is still handpicked and delivered to the closest market.”

Such devotion to a now-defunct tradition, says Albala, can have strange repercussions on a cuisine taken out of its homeland. “Sometimes it becomes ossified,” he says. “It stays the same, because people think, ‘Oh, this is the way the recipe is made, it has to be done this correct way.’ Whereas back in the home country, it’s evolved and changed already.”

But bringing a culinary grammar into a new setting can also result in the creation of interesting, new dishes. And just as some languages, like English, are super elastic, welcoming neologisms easily, while others, like French, are less manipulable, some cuisines are more welcoming of culinary novelty than others.

“Japanese people will take anything and make it theirs,” says Albala, citing shokupan, a Japanese white bread that’s even sweeter and softer than American Wonder Bread. Other examples include the aforementioned hambagoo, a bunless burger served with a thick demi-glace, or Napolitan, which sees Italian spaghetti stir-fried with vegetables and ketchup.

Many such adaptations arise in response to grammatical needs, such as the Western expectation of dessert, which led to the adoption of fortune cookies, originally Japanese, in American-Chinese restaurants. The same holds for the 18th-century invention of Indian mulligatawny to satisfy the British desire for soup, or the crunchy fried noodles served as a pre-meal snack at some Chinese restaurants in place of bread.

Today, in the West, diners craving “authenticity” may shy away from these adapted foods, but in the past, such adaptation was expected and even encouraged. Much like the denigration of regional languages such as Breton or Basque, commonplace in the early half of the 1900s, many “exotic” cuisines were once transposed on the local grammar in order to make them more palatable. Mukta Das, food anthropologist and research associate at the SOAS Food Studies Centre, notes that from the 1950s, many Indian and Chinese restaurants adopted a grammar of the British High Street by adopting “fine dining concepts (table service from liveried wait staff, table cloths, napkins, a full set of silverware and glassware etc).”

Today, overzealous diners rebuffing these attempts can risk erroneous over-correction. Despite Thai people eating with a fork, for example, “Americans expect chopsticks in Asian restaurants,” says Lee, “so restaurants in America use chopsticks.” And much like linguistic false friends (such as embarazada, Spanish for pregnant, not embarrassed, or jungli, which means wild in Gujarati, not jungle), the meanings of some foods may not come across to outsiders.

“You don’t really understand a culture unless you speak their language,” says Albala, “and I think the same thing is true of a cuisine, when you’re born into it and doing it all the time and understand all those weird, unwritten rules.”

But when someone who is, in essence, culinarily bilingual attempts these adaptations, exciting discoveries abound. Elis Bond, the Franco-Caribbean chef behind Paris’ critically acclaimed Mi Kwabo, marries pan-African cuisine with contemporary European techniques, riffing on the conviviality of one large dish to pave the way, instead, for a procession of modern small plates. In marrying African flavors and a French grammar, Bond has managed to create something that pleases both locals and members of the African diaspora with the deftness of a mother-tongue translator.

From pan-African tasting menus to fortune cookies, these creative mistranslations or adaptations can become, in turn, their own canon: “Western food” has returned to America, with yoshoku restaurants arriving in New York; the American iteration of Polish bagels has, in turn, been reimported into Europe; General Tso’s chicken, an American invention, has become a beloved Chinese-American dish the world over.

“There are a lot of people who will go to like the Middle East and crave General Tso’s chicken,” says Lee. “It kind of settles into a set of expectations and culinary traditions; it does gel into its own thing.”

“I think it’s silly to ever think that a cuisine or a language is ever going to stop,” he continues. Referencing dictionaries and grammar textbooks, he adds, “The minute you write that stuff down, it’s already changing. And new words and new dishes and new ways of putting things together… it’s going to happen whether people want it to or not.”

Gastro Obscura covers the world’s most wondrous food and drink.