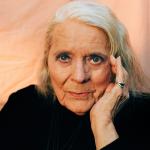 Barbara Dane keeps a copy of her four-inch-thick F.B.I. file in a binder in the living room of her Oakland home. One night in late December, the 93-year-old singer and activist’s daughter, Nina Menendez, was leafing through it and noticed a page she hadn’t spotted before: a Los Angeles Times clipping from a 1972 concert at the Ash Grove. Dane was the headliner that evening, where she first encountered the soulful folk band Yellow Pearl, whose music she would go on to release through her then-nascent record label, Paredon Records.

The file doubles as a testament to Dane’s work as an opposition artist for the better part of a century. The earliest entries are from when she was 18, spearheading a chapter of Pete Seeger’s labor-music organization People’s Songs in her native Detroit, and singing on picket lines to protest racial inequality and to support unions.

“I knew I was a singer for life, but where I would aim it didn’t come forward until then,” Dane said. “I saw, ‘Oh, you can use your voice to move people.’”

Speaking with the eloquent conviction and blunt resolve of a woman who never compromised, Dane called the F.B.I. file a waste of tax dollars. Bundled in a winter coat and beret during a recent video interview, she was more eager to show off the wood-carved Cubadisco statuette (the Cuban equivalent of a Grammy) she was awarded in 2017 to honor her early efforts disseminating the political music known as nueva trova in the United States through her label.

A supercut of Dane’s audacious career as a musician — which, since the late 1950s and 1960s has encompassed jazz, folk and the blues — would include the mother of three appearing on a televised bandstand alongside Louis Armstrong and singing “Solidarity Forever,” her favorite song, onstage with Seeger supporting striking coal miners. Her ethos was anticapitalist and adaptable: She wove progressive politics into her sole album for Capitol, “On My Way” from 1961, and later brought raw rock ’n’ roll verve to the protest doo-wop of her 1966 Folkways album with the Chambers Brothers. She performed in Mississippi church basements during Freedom Summer and with antiwar G. I.s in coffee houses. 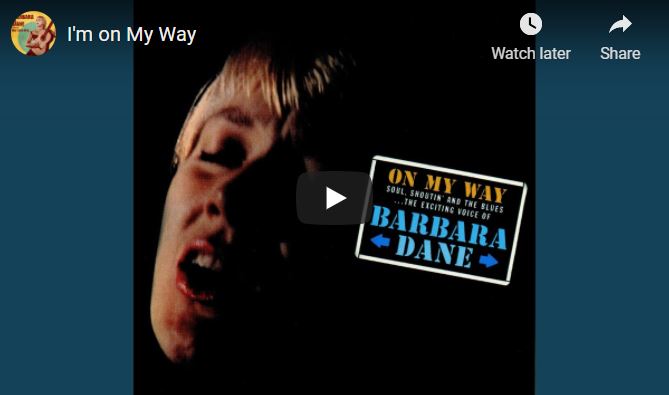 Dane learned early on that her outspokenness and politics meant commercial success would evade her. (Bob Dylan’s manager Albert Grossman told her to call him when she “got her priorities straight.”) She started Paredon for the explicit purpose of providing a platform to music born of freedom struggles around the world that wasn’t beholden to the whims of the marketplace.

Paredon has often been considered an aside in Dane’s story, but is receiving more attention now: The label turned 50 last year, and is the subject of a new “digital exhibition” by Smithsonian Folkways, the nonprofit record label of the Smithsonian Institution, where it has been housed for three decades. Co-founded by Dane and her husband Irwin Silber, a founder and longtime editor of Sing Out! magazine who died in 2010, Paredon was a people’s label through and through, releasing music produced by liberation movements in Vietnam, Palestine, Angola, Haiti, Cuba, Puerto Rico, Greece, Uruguay, Mexico, the United States and beyond.

“I saw that whenever the movement in a particular country was strong, there was an emerging music to go with it,” Dane said. “It struck me that this stuff needed to be heard in the voices of the people who wrote the songs.”

Taken together, the 50 albums that Paredon released from 1970 to 1985 form a staggering archive of art and dissent, of resilience and sung histories within histories. The music reflects civil rights, women’s rights and anticolonial movements, and illustrates the interconnectedness of these revolutions. Dane had been a venue owner, concert booker, radio D.J., television host and writer. With Paredon, she became a folklorist of resistance.

“Paredon didn’t put out music about politics. They put out music of politics,” said Josh MacPhee, the author of “An Encyclopedia of Political Record Labels” and a founder of the Brooklyn-based Interference Archive, which chronicles the cultural production of social movements. “These are not artists commenting on political issues. These were sounds that were produced by people in motion trying to transform their lives.”

With leftist politics at their core and deep roots in activism, Dane and Silber built trust among like-minded artists. “Anything I was going to issue was from somebody who had been on the front lines somewhere,” Dane said. Each Paredon release included an extensive booklet with contextualizing essays, photographs, translations of lyrics, and information about how to connect with or help the movement.

The catalog included musicians steeped in social movements at home, like Bernice Johnson Reagon — a founding member of the Student Nonviolent Coordinating Committee’s Freedom Singers, and later of the a cappella ensemble Sweet Honey in the Rock — whose solo album, “Give Your Hands to Struggle” from 1975, was filled with rhapsodic self-harmonizing. It also included the Covered Wagon Musicians, a group of subversive active-duty Air Force men who sang out from their Idaho base, “We say no to your war!”

“I was nervous — I had no experience recording,” said the Argentine musician and educator Suni Paz, who had been living in the U.S. for about eight years when Dane asked her to record for Paredon. “Brotando del Silencio — Breaking Out of the Silence,” in 1973, became Paz’s first album, before which, “I was not heard at all. Barbara Dane gave me complete and total freedom. She said, sing whatever you want. I was going to sing anything political that I had in my brain, in my heart, in my soul.” 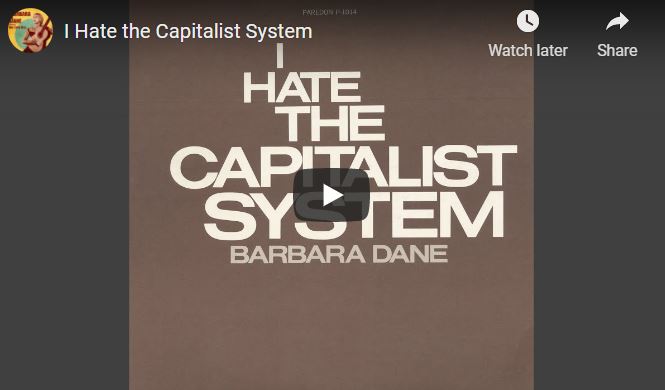 Nobuko Miyamoto of Yellow Pearl, the group of Asian-American activists Dane discovered when they shared a bill in 1972, said her band was unlikely to have recorded for another label. “Barbara had just done an album called ‘I Hate the Capitalist System,’ and that convinced us this was the right record company,” Miyamoto said, referring to Dane’s 1973 collection with bold cover art.

The album Yellow Pearl released on Paredon was the poetic and groundbreaking “A Grain of Sand: Music for the Struggle by Asians in America,” which included anthems like “We Are the Children” and “Free the Land,” featuring backing vocals from Mutulu Shakur (his stepson, Tupac Shakur, sang along to “A Grain of Sand” as a child, according to Smithsonian Folkways Magazine). It was recorded in two and a half days at a small New York studio and that no-frills spontaneity brings the music alive still.

“Barbara was a pretty brave soul to offer to do this,” Miyamoto said. “And because of that, our music was preserved. So I was very grateful. If it weren’t for her, that music really would have been lost.”

DANE GREW UP in Detroit during the Great Depression, the daughter of Arkansas natives. Her father owned a drugstore, where she and her mother worked, and as a child she bore witness to racism and poverty that she immediately identified as wrong. “You saw it all around you: how bad the system was treating its citizens,” she said. At 11, sitting under a tree, a neighborhood friend explained to her that there were three ways of organizing society: capitalism, socialism and communism. “From then on, I started looking around for the socialists — anyone who could tell me more,” she said, noting, too, her teenage affiliation with communism. “That search went on and on.” (And led to that F.B.I. file.)

It wasn’t long before she was leading protests with songs like “Roll the Union On” and “We Shall Not Be Moved,” using techniques she had learned from an opera teacher. An early lesson in the power of saying “no” occurred when she was offered a tour with the bandleader Alvino Rey and turned it down: “Why would I want to stand in front of a band with a low-cut dress singing stupid words when I could be singing for workers who are on strike?,” she said. “It didn’t seem like a good bargain to me.”

Defying a government ban, Dane’s travels in Cuba initially inspired her to found Paredon. In 1966, she was one of the first artists to tour post-revolutionary Cuba, and she returned to Havana a year later as part of an international meeting of artists called Encuentro Internacional de la Canción Protesta, where she met musicians from around the globe who were writing social-justice songs, like Cuba’s Carlos Puebla and Uruguay’s Daniel Viglietti.

Back home, Dane told everyone, “I’m going to start a record label,’” she recalled. “I just kept saying that and saying that. ‘But I’m looking for the funding.’” A friend came through, connecting Dane with a “wayward millionaire” who sent her one check for $17,000 and said to not report back.

The first release was “Cancion Protesta: Protest Song of Latin America,” which opened with a field recording of Fidel Castro invoking the power of art to “win people over” and “awaken emotions” recorded by Dane herself. Paredon also released spoken word albums featuring speeches and statements of Huey Newton, Che Guevara and Ho Chi Minh. Mostly, Dane continued to discover music “on the fly,” she said, as she traveled the world singing out against the Vietnam War. Material from Chile and Northern Ireland came to her in a clandestine fashion, by some artists who remained anonymous.

The history of vernacular music in America is filled with mythic men — the ethnomusicologist Alan Lomax, the eccentric Folkways founder Moe Asch, the folk hero Seeger — and Dane evokes each of their restless, visionary spirits to some degree. “They’re all puzzle pieces to this very large story,” said Jeff Place, curator and senior archivist at Smithsonian Folkways, noting that Paredon’s releases were “mostly too political” for Asch at Folkways.

Dane certainly never held her tongue. If you see your country “making horrible mistakes, you have to speak up,” she said. “You’re colluding with it if you don’t speak up.”

Dane and Silber didn’t profit off Paredon. They ran the label out of their apartment in Brooklyn’s Cobble Hill neighborhood and had no interest in turning it into a business. Silber had previously worked for Folkways, equipping him with the knowledge of how to keep the operation small, pressing a few hundred records at a time, and often using the same graphic designer, Ronald Clyne, known for his earthy minimalism.

When Paredon became too unwieldy to remain an at-home endeavor, Dane and Silber soon ended it and moved back to California, where Dane refocused on her singing. “When I was 89, I made the record that I would liked to have made years earlier,” she said of her 2016 LP “Throw It Away,” a collaboration with the jazz pianist Tammy Hall. Dane is currently writing her memoir, and a film about her life, with the working title “The Nine Lives of Barbara Dane,” is in production.

Place recalled his 1991 trip to Oakland to interview Dane and Silber and physically acquire the Paredon collection: “I got a rented van, put the entire Paredon collection in the back of it, and drove communist records across the whole country to D.C. and put them in the Smithsonian.”

Reflecting on the label’s legacy now, Dane is hopeful it holds lessons for the era of Black Lives Matter and surging conversation about democratic socialism. “One must participate in the emerging struggle around them in order to make art that reflects it,” she said.

“If you’re an artist, you’ve already got tools. If you don’t know what to write about, remember that truth and reality is what we’re after. You have to know reality to tell the truth about it. You got to get out and be a part of it.”

[Jenn Pelly is a contributing editor at Pitchfork and author of The Raincoats. Her writing has appeared in The New York Times, The Los Angeles Times, Rolling Stone, The Guardian, The Believer, The Wire, NPR, and Teen Vogue. She is a co-curator of Basilica Soundscape and lives in New York.]