Taking it to the street: Food vending during and after COVID-19 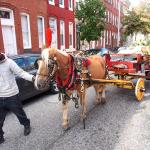 The COVID-19 pandemic is changing the way we eat.

Because outdoor dining poses less risk of infection, many cities have changed their laws to accommodate public demand.

And San Mateo, California, is considering the once unthinkable: permanently removing some parking spots to allow year-round outdoor dining.

But what about mobile food vendors?

For the past 10 years, as a community and regional development professor, I have studied how street vending provides an economic lifeline for many people, particularly in low-income communities.

With increasing income inequality, growing unemployment and bans on indoor dining because of COVID-19, more people are turning to the street to make a living and to accommodate a rising need.

Many flavors of street food vending

When you think of street food, perhaps an image that comes to mind is the trendy food trucks increasingly popping up on streets and in parking lots across the United States.

But it also includes mobile vendors selling mangoes at the beach or fruits and vegetables from stands on the sidewalk.

In San Diego, California, for example, vendors called fruteros use paleteros, or pushcarts, to sell fruit in low-income Latino neighborhoods.

In Troy, New York, the nonprofit Veggie Mobile sells fruits and vegetables in low-income areas via a refrigerated box truck.

While some researchers were asking whether farmers markets could provide affordable and healthy food to low-income neighborhoods, my very first food study, in 2013, examined the affordability of produce sold by street vendors who already operated in these neighborhoods.

With two colleagues, I compared the price and variety of produce from street food vendors with produce sold at grocery stores in Philadelphia.

We found that curbside vendors offered 18 to 71 different varieties of fresh produce at lower prices, ranging from one-half to one-third less than the price for a similar item in the nearest grocery store. The curbside vendors all got their produce from a central produce terminal, just as the grocery stores did, but they did not mark up their prices as much.

We also found that many mobile vendors had operated on the same corner for decades, outlasting grocery stores that opened and closed numerous times in a few years.

Such closures can turn neighborhoods into so-called “food deserts” – urban areas that lack a supermarket and the amenities that come with it, like employment opportunities, pharmacies and ATMs.

In a 2017 nationwide study on food deserts, two colleagues and I found that curbside produce vendors often help communities that lack a grocery store to at least maintain access to healthy, inexpensive food, thereby reducing the amount of diet-related health diseases, like diabetes and obesity.

Produce vendors have a particularly positive impact on the dietary health of low-income eaters. Customers who use SNAP benefits, for example, are more likely to shop at street vendors than other produce sources. Consequently, they spend an average of $3.86 more per transaction on fruits and vegetables, according to a 2015 study published in the Journal of Chronic Diseases.

A January report on New York City street vendors shows that the pandemic has made life much harder for these workers, who are often not eligible for federal loans and do not qualify for social services. But long before the pandemic, many cities made it difficult for mobile produce sellers and other street food vendors to operate.

They found that restrictive regulations are often created at the behest of brick-and-mortar restaurants. Restaurants have well-established trade associations that lobby local and state governments for protection against competition, affecting both food trucks and other forms of street food vending.

To understand how pervasive these measures were, in 2020 I reviewed street food vending regulations in a random sample of 213 of California’s 465 cities and all 58 counties.

I found that 85% of cities and 75% of counties limited street food vending for reasons beyond public health protocols. The restrictions involved zoning regulations that limited where vendors could operate, ordinances that restricted the times of operations and strict labor laws not enforced on brick-and-mortar businesses.

The city of Davis, for example, prohibits vendors from stopping for more than 5 minutes, effectively banning the practice entirely because it often takes more than 5 minutes to wait on a customer. And Butte County requires vendors to be interviewed and fingerprinted by the sheriff – something not required of brick-and-mortar workers.

Because mobile food vendors are often immigrants and people of color, these policies are intimidating barriers for an already marginalized group.

In response to these prohibitions, food vendors have begun to form their own advocacy associations.

The Los Angeles Street Food Vending campaign, launched in 2008, was so successful that in 2018 California legalized street food vending statewide. The campaign highlighted the economic benefits to vendors and eaters as well as the racism in the exclusionary legal codes.

In California, street food can now be regulated only for health and safety reasons. As our study shows, many cities and counties will need to update their policies. So far, there is no sign that cities are starting to tackle this.

Though street food vendors are considered essential workers, Los Angeles is fining vendors who don’t follow a newly created permitting process, which is difficult to navigate and expensive. Vendors pay between 10% and 20% of their annual earnings in inspection and permitting fees.

Outdoor dining is the healthiest way to eat and keep local businesses alive during a pandemic. Efforts to expand street food vending can help keep the most vulnerable people out of poverty – and well fed as well.

Every article you read here is written by university scholars and researchers with deep expertise in their subjects, sharing their knowledge in their own words. We don’t oversimplify complicated issues, but we do explain and clarify. We believe bringing the voices of experts into the public discourse is good for democracy.