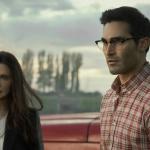 It’s no surprise that Arrowverse head honcho Greg Berlanti would want to build a show around Tyler Hoechlin’s Clark Kent and Elizabeth Tulloch’s Lois Lane. The duo have winningly brought the classic characters to life since they first debuted in The CW’s shared superhero universe (him in 2016 and her in 2018)—perfectly carrying on the sunny, feel-good vibes of the flagship Supes series, Supergirl, while also depicting a lovely partnership of equals. Particularly with Supergirl heading into its final season, it makes sense for another Kryptonian to take over the mantle on the small screen. What is surprising is the tone and focus of their new spinoff series, Superman & Lois. This is a big, splashy two-hour premiere of a Superman series that’s first and foremost a somber family drama about reverse mortgages.

It’s an interesting—and gusty—approach to one of the most well-explored characters in live action superhero history. The challenge of writing a Superman story is finding dramatic tension for a character who’s both physically all-powerful and emotionally well-adjusted. Superman & Lois decides to lean into the small-scale human problems that Clark can’t control nearly as easily as he prevents a nuclear reactor meltdown. There are some big action scenes in this expanded premiere, but they very much play second fiddle to Clark’s melancholy emotional journey. As a teenager, he chose to leave Smallville when his father’s fatal heart attack gave him a desire to save others in the way he couldn’t save his dad. As he adult, he chooses to return to his hometown when his mother’s fatal stroke makes him realize that family and community are important foundations to pass along to his two teenage sons.

Oh yeah, Clark and Lois have teenagers now! Despite its Arrowverse connections, Superman & Lois is very much designed as a standalone series, which makes it a good jumping on point for new viewers, but, if anything, a slightly confusing one for long-time Arrowverse fans. The last time when saw Clark and Lois, she had recently given birth to their first child, until the side effects of a massive universe-reset in the “Crisis On Infinite Earths” crossover left Clark shocked to learn he had two sons, not one. There’s a world in which Superman & Lois could’ve been a series about Clark processing his memories of two alternate realities or dealing with a sped-up timeline for fatherhood. But understandably (and probably wisely), Superman & Lois decides to skip all that connected-universe wackiness and just establish its own status quo instead.

Pulling from the Black Lightning playbook, Superman & Lois is a superhero family drama that pointedly comments on real-world issues. Clark loses his job at The Daily Planet during a round of brutal media layoffs and returns to Smallville only to find his once thriving hometown crumbling under an economic collapse that sees big businesses buying up all the small family farms. There’s a definite “won’t someone think of Middle America?!?” vibe to the whole thing, although Superman & Lois doesn’t paint all of Smallville’s residents with an entirely rosy brush. Kyle Cushing (Erik Valdez)—husband of Clark’s high school sweetheart Lana Lang (Emmanuelle Chriqui)—has a MAGA-like adoration for billionaire businessman Morgan Edge, who seems to have his hand in the pocket of nearly every corner of the show’s universe, from the banks of Smallville to the newspapers of Metropolis.

The Morgan Edge throughline sets up a big conspiracy for Lois to investigate, although, frustratingly, this premiere mostly positions her as a supporting player for the men in her life. Other than one fun Daily Planet scene where she lets out some anger-fueled gumption that feels very classic Lois, Tulloch’s mostly stuck in concerned wife/mother mode here. There’s not even a single conversation about how a move to Smallville would impact her career as an award-winning journalist, nor is her relationship to her sons given much specificity. Though at least one of her kids has inherited her classic sense of investigative curiosity, on the whole this pilot feels much more like Superman & Sons than Superman & Lois.

Indeed, the 14-year-old Kent twins each represent a different side of their father’s personality. Promising quarterback Jonathan (Little Fires Everywhere’s Jordan Elsass) has his dad’s upbeat confidence and sunny disposition, while introverted Jordan (Alexander Garfin) struggles with Clark’s classic sense of alienation, which is reflected in his clinically diagnosed social anxiety disorder. It also turns out that Jordan has literally inherited his father’s powers too. Pulling from the X-Men template, Jordan’s abilities manifest during times of heightened teenage stress. And there’s maybe no greater teen stress than finding out your dad is secretly Superman and you’re actually half Kryptonian.

The Jordan reveal is supposed to play as a twist, although, as with a lot of this pilot, it’s easy to get ahead of where the show is going. Though a fun opening montage effectively breezes through the most familiar parts of Clark’s origin story, the rest of the premiere drags when it comes to setting up the premise of the actual series itself. A lot of this episode is spent waiting for the other shoe to drop—from Jonathan and Jordan finding their dad’s hidden Kryptonian pod to the Lane-Kents deciding to move back to Smallville to take over the family farm. And that predictability becomes especially glaring when the character dynamics are fairly familiar and the dialogue (especially for the teen characters) pretty rote.

Instead, the biggest surprise of Superman & Lois is simply where it chooses to put its focus. Though Superman gets a shadowy villain who’s eventually (and intriguingly) revealed to be “Captain Luthor,” Superman & Lois is first and foremost interested in adult character drama, which makes it unique for both the superhero genre and The CW’s usual teen focus. While Superman & Lois has a certain cinematic, golden-hued, slow-motion-heavy aesthetic that calls to mind Zack Snyder’s current big screen take on the Man Of Steel, it equally feels like a years-later sequel to The WB’s Smallville series. One where Lois and Clark are now facing the grown-up issues of Ma and Pa Kent.

Like a fan-made trailer that reimagines a classic sitcom as a gritty drama, there’s something compelling about seeing the pieces of Superman’s story explored through such an unexpected lens. But the question is whether that novelty aspect is enough to sustain an entire series. And the other question is whether this somber tone is what we’re looking for from our superhero shows during such a difficult real-world moment. This episode is dark, not in the performatively grim and gritty way of the big screen DCEU, but in a much more grounded way—as characterized by Lana Lang’s teenage daughter Sarah Cushing (Inde Navarrette) opening up about her own depression and suicide attempt after sharing a story about Smallville residents killing their own kids in a meth explosion. While Supergirl has spent the past six years delivering the sunniest possible take on her motto of “hope, help, and compassion for all,” Superman & Lois is here to offer a much more sober look at “truth, justice, and the American way.”

Contributor, The A.V. Club. Caroline Siede is a pop culture critic in Chicago, where the cold never bothers her anyway. Her interests include superhero movies, feminist theory, and Jane Austen novels.