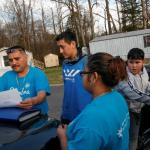 The coalition Democrats brought together in 2020 was enough to beat Trump—but it’s insufficient for the long-term fights ahead. If 2020 was, as Biden put it, a fight “for the soul of the nation,” the next task for the progressives is even harder: build a multiracial working-class majority big enough to win a transformative agenda that lifts America out of 2020’s roiling crises, and truly transform people’s lives. That’s how progressives win for the next generation.

Believe it or not, Republicans are making a play to be the party of the multiracial working class too. House Minority Leader Kevin McCarthy and Sen. Marco Rubio are both on record saying the party will focus on “the American worker” to rebrand itself as a “pro-worker party.”

It might be tempting to laugh off that goal. How can a party so focused on doing the bidding of billionaires win over working-class Americans—especially a party whose biggest legislative victory was the Trump tax cuts for the rich? And how can a GOP so focused on amplifying racial resentment ever gain ground outside their white base?

While the GOP has long been the party of big business and billionaires, there are millions of working-class people of all races who are skeptical of the Democratic Party too. If you think this experiment by the right is doomed to failure without significant counter-organizing and action on our part, I caution you to look to the last four years and think again.

Despite unleashing bigotry at every turn, Trump made inroads with communities of color in 2020. It’s true that Biden’s victory was dependent on massive turnout from people of color who voted in spite of voter suppression and a global pandemic. But it’s also true that Trump gained ground in some communities of color, especially among Latino voters—not just Cubans in Florida but Mexican Americans in the Rio Grande Valley and Puerto Ricans in Northeastern cities like Springfield, Massachusetts. We would be foolish to let satisfaction with the victory allow us to paper over these troubling trends.

At the same time, Biden’s coalition was increasingly concentrated in cities and their nearby suburbs. Democrats made gains in formerly Republican suburbs but lost strength in many rural and exurban areas. That shift makes winning majorities in statehouses and in the (anti-democratic) U.S. Senate a real and long-term challenge for Democrats.

The right has been seeking to diversify the Republican Party since before Trump, in part by elevating people of color who tout flawed messages of a color-blind society while downplaying or ignoring systemic racism. While we laugh at charlatans like Candace Owens and astroturf campaigns like Blexit, we must understand that underneath the facade lies a commitment to investing real money into organizing communities of color. The same thing has happened in Latino communities, with organizations like the Koch brothers–funded LIBRE Initiative, which have paid off electorally. The Proud Boys even have multiracial leadership. Because of gerrymandering, the concentration of Democratic voters in metropolitan areas, and the structure of the U.S. Senate, the left has to rely on Herculean efforts from communities of color (Black voters in particular). The right only has to peel off voters at the margins to remain competitive or win outright. In other words, Republicans don’t have to win a lot, they have to win enough.

Defeating the right and winning the future requires progressives to build new muscles. What would it mean for us to truly seek to represent the multiracial working class? It’s easier said than done, but here’s how we’d start.

First, it means investing in year-round organizing capacity—even in the rural places where we’re not likely to win outright, or at least not for a long time. The weakening of the labor movement over the past decades has been a tremendous boon to the right wing, but nowhere more so than in rural areas. Whenever Democrats have the chance, they should pass pro-labor reforms like the PRO Act, which would strengthen the ability to organize a union.

But we also need to build up other forms of year-round civic organization in those communities, including cultural organizing. We must build organizational strength for the long haul, not just around election season. That can develop the muscles of democratic participation, engage in community-based political education on local and national issues, and recruit leaders with credible local voices. That kind of organizing is at the root of long-term cultural change. That kind of ongoing investment in rural organizing is a substantial challenge because the payoff is not quick and the funding streams for the work are not obvious.

While the GOP has long been the party of big business and billionaires, there are millions of working-class people of all races who are skeptical of the Democratic Party too.

Second, we need to stop the political trend of treating people of color as a “turnout” audience and (generally affluent and white) suburbanites as a “persuasion” universe we need to appeal to. That leads to candidates shaping their messages around only what those suburban voters want to hear. Taking voters for granted is a surefire recipe for bleeding their support over time. We need organizations, movements, and leaders that listen to and speak for the demands of working-class communities of color—and we need politicians who embrace them.

That means leaders touting the same authentic message to “the base” as well as swing voters. We can’t recruit candidates who think that economic populism or racial justice are to be shunted off to the side when it’s campaign time.

Third, we need to invest in the creation of alternative, progressive, locally rooted media. As local journalism has dwindled, most people are relegated to the offerings of national corporate media, which serves a limited spectrum of beliefs ranging from Beltway consensus to right-wing furor. The alternative is a paranoid and outrage-driven social media environment that has proven to be a breeding ground for misinformation and conspiracy theories. Local media is an important part of a healthy democracy, and there aren’t many models to sustain it right now.

Finally, this project depends on Democrats using their new (though slim) majorities to actually deliver for working people who’ve suffered through a year of COVID, economic collapse, police killings, and climate-fueled disaster.

Democrats have done well to amplify the horrors of Republican government, but if they fail to deliver meaningful relief and recovery, will people see a reason to continue aligning electorally with the left?

The Republican Party’s strength depends on people’s cynicism that government can’t actually work. Directed at the working class (of all races), the Republican message is that government is captured by the rich and will never truly work for you. Democrats should be loath to prove them right—by delivering material gains so significant they can’t be ignored. At this very minute, Democrats are in danger of falling short of that mandate.

But make no mistake—if working people fail to see real material distinctions between life under Trump and life under Biden, they’ll look for an alternative to the party in power. If people experience material change as a result of the work of the party in power, and the movements in motion, they’ll align with it in a profound and lasting way.

If we succeed, we’ll win the hearts and minds of working people for a generation. There are no shortcuts. We rise or fall based on our commitment to the deep and hard work that will lay the foundation for a political realignment in this country.

[Maurice Mitchell is the national director of the Working Families Party.]

This article is part of the Prospect’s series on The Future of Organizing.