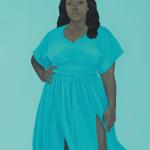 Typically, Amy Sherald’s gallery would handle the sale of her artwork to a collector or an institution. But when it came to her portrait of Breonna Taylor — the 26-year-old medical worker who was shot and killed by police officers in Louisville, Ky. — Sherald herself wanted to see that particular painting all the way home.

“I felt like it should live out in the world,” Sherald said. “I started to think about her hometown and how maybe this painting could be a Balm in Gilead for Louisville.”

Sherald believed the painting should be seen by people where Taylor died as well as by a broader audience. And she intended the proceeds from her sale of the painting to advance the cause of social justice.

In an unusual arrangement that has unified two museums and two foundations, Sherald has managed to achieve those goals for the work, which was originally commissioned for the cover of Vanity Fair last September by Ta-Nehisi Coates, who was a guest editor for a special edition on activism.

The 54-inch-tall by 43-inch-wide painting will be jointly owned by the Smithsonian’s National Museum of African American History and Culture in Washington, D.C., and by the Speed Museum in Louisville, assuming the artwork passes through both museums’ acquisition process.

The institutions purchased the painting with $1 million donated by the Ford Foundation and the Hearthland Foundation, a new philanthropy that supports social justice initiatives and is run by the actress Kate Capshaw and her husband, the director Steven Spielberg.

Sherald plans to direct the funds from the painting’s sale toward a program she is forming with the guidance of both foundations that will support students pursuing higher education who have an interest in social justice.

The artwork is expected to be included in the Speed Museum’s Taylor-inspired exhibition — “Promise, Witness, Remembrance,” which opens April 7 and has been organized by Allison Glenn, an associate curator at the Crystal Bridges Museum of American Art in Bentonville, Ark., in consultation with Taylor’s family.

Sherald — along with the artists Theaster Gates and Hank Willis Thomas — serves on the Speed’s advisory panel for the exhibition, which will feature prominent Black artists including Sam Gilliam, Lorna Simpson, Kerry James Marshall and Glenn Ligon.

“The killing of Breonna Taylor and a year of protests have really changed the course of Louisville, and we’re struggling,” said Stephen Reily, the Speed’s director. “Our goal and ambition is to use the work of great artists to help process what we’ve been through and collectively find a way forward.”

Lonnie G. Bunch III, the founding director of the National Museum of African American History and Culture, who is now the Smithsonian’s secretary, said Sherald’s painting of Taylor “captured both the joy and the pain of this moment.”

When Coates asked Sherald to paint Taylor, the artist said she “saw it as an opportunity to codify the moment.” Sherald, 48, who had a heart transplant in 2012, had been unable to participate in last summer’s protests amid the pandemic. The painting gave her the chance “to have a voice and to give Breonna Taylor a voice.”

The commission was only Sherald’s second — the first, which catapulted her to national prominence, was Michelle Obama’s official portrait, which has been drawing crowds at the National Portrait Gallery (and is set to go on a five-city tour with the Kehinde Wiley portrait of Barack Obama, beginning in June).

It was also the first time Sherald had painted someone who was no longer living. So she embarked on an immersive process of research, studying photos of Taylor, and speaking with Taylor’s mother, Tamika Palmer, “so I could get a feel for who she was as a person,” Sherald said, “her sense of style and how she felt beautiful.”

“Her mom shared with me that she loved to get dressed up,” Sherald added, “So I thought it was fitting that she have on a beautiful dress.”

Palmer said her daughter was “definitely a diva."

“You wouldn’t catch her not together,” she continued, “she definitely took pride in what she looked like and how she carried herself.”

Sherald wanted to find a Black female designer for the dress — she settled on Jasmine Elder of Atlanta-based JIBRI — believing that “a Black woman painting a portrait of a Black woman should be dressed by a Black woman.”

The artist photographed an acquaintance who shared Taylor’s body type and considered what color to make the dress. “I decided to go with turquoise, and then with a background that was the same color, because it really allowed you to focus on her face and look in her eyes,” said Sherald, whose subjects gaze directly at the viewer. “She has this kind of otherworldly feel, kind of ethereal, very peaceful.”

The artist’s connection to Taylor was aided by a video Coates sent of Taylor double-Dutch jump-roping. “I got to hear her giggle,” Sherald said, “and hear her voice.”

The artist LaToya Ruby Frazier shared with Sherald photographs she had taken of the Taylor family for the Vanity Fair issue, including one of the engagement ring with which Taylor’s boyfriend, Kenneth Walker, had planned to propose.

“I realized this was a love story, too,” Sherald said. “I asked permission to paint that ring onto her finger. She didn’t know he had the ring.”

Upon seeing the finished painting, Palmer was overwhelmed. “I could not believe it,” she said. “It definitely showed her character and who she was.”

Sherald could have sold the painting through her gallery, Hauser & Wirth, which on March 20 will open a show of the artist's latest work at its Los Angeles location, her first West Coast solo exhibition. But she wanted to more directly control the fate of her Breonna canvas, so reached out to her friend, Capshaw.

Capshaw had felt a kinship with Sherald from afar since reading a 2017 interview with her in The New York Times and finding they had passions in common, including the poet David Whyte and the public radio host Krista Tippett.

“I am feeling this is someone I already know,” Capshaw said of that moment. She has since become Sherald’s friend, and said she wanted to help the artist realize her goals for the Taylor painting. “What is it that is needed to make sure that she gets to be the author of the story of this portrait?” Capshaw said. “Whatever it costs to make that happen, I was in.”

“She’s been the architect,” Capshaw added of Sherald. “It will be what it will be because of her. She is serving Breonna as a symbol, as a person, as a story that needs to be told, as a representation of something that is happening in this nation that needs to stop.”

Capshaw called Darren Walker, the president of Ford Foundation, who agreed to share the purchase price and to make an additional $1.2 million grant to fund the Speed’s upcoming Taylor exhibition as well as free admission and community programs there.

“This painting and exhibition embody the idea of art for justice and demonstrate the potential power of art to heal,” said Walker, who in 2017 played a similar role in helping the art collector Agnes Gund sell a 1962 Roy Lichtenstein painting to start a fund that supports criminal justice reform.

The Breonna Taylor work “indicates how an artist can play a transformative role in bringing more equity to a community,” he said.

In the 2017 Times interview, when she was just gaining fame for painting the first lady, Sherald expressed the hope that she would someday be able to give back to struggling youth, after paying off her school loans and affording her heart medication.

“When I look at those people,” Sherald said at the time, “I see myself.”

Talking now, Sherald got emotional realizing that four years later — having skyrocketed in the art world, with one work reaching $4.3 million at auction over an estimate of $150,000 to $200,000 — she is finally able to do that.

“I specifically thought about a young woman I mentor now who wants to go to nursing school but doesn’t have the means to do it,” Sherald said. “I really want the money to give someone an opportunity to do something they might not have been able to do without it.”

Palmer said she is moved by the idea that Sherald’s poignant image will live on in major art institutions for the world to look at and learn from. “Never in a million years would I have thought she’d end up in a museum,” Palmer said of her daughter. “I still can’t even find the words. It’s such a blessing, because people will come from everywhere to see her.”

[Robin Pogrebin is a reporter on the Culture desk, where she covers cultural institutions, the art world, architecture and other subjects. She is also the co-author of “The Education of Brett Kavanaugh: An Investigation.” @rpogrebin • Facebook]