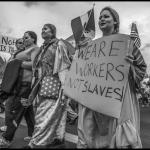 The intention of the US guest worker program for agriculture, called the H-2A program, couldn’t have been stated more clearly than it was by agriculture secretary Sonny Perdue in a January 2020 speech to growers. He wanted, he said,

to separate immigration, which is people wanting to become citizens, [from] a temporary, legal guest-worker program . . . That’s what agriculture needs, and that’s what we want. It doesn’t offend people who are anti-immigrant because they don’t want more immigrant citizens here. We need people who can help US agriculture meet the production.

By separating the immigration of families, in which migrants become community members and eventually citizens, from the recruitment of migrants solely for their labor power, in which they work and then leave, Perdue was restating a goal of US immigration policy that has existed from its inception. In opposition to that goal, the civil rights movement among Mexican and Asian Americans proposed an alternative vision to guide our immigration policy, one that favored unifying families and strengthening immigrant communities, and forced Congress to enact a law in 1965 that enshrines that vision.

The Immigration and Nationality Act of 1965 was a high point, however. In the subsequent years, US agriculture’s use of migration as a labor supply program has grown enormously, under both Democratic and Republican administrations. The Trump administration, however, made the H-2A program’s growth a priority. While ending family-based migration through an emergency executive measure, it issued order after order making the H-2A guest worker program more attractive to agribusiness.

The Biden administration must decide not only which of those administrative orders it intends to revoke, but if it will pursue a different direction for US immigration policy in general.

The movement of people from country to country, displaced by war, insecurity, and neoliberal economic policies, is enormous and growing. The US government, like all others, develops its policy within that context. The US Congress and presidential administrations do not debate the means for ending this flow of people, despite the often-poisonous anti-migrant rhetoric. Nothing can stop this global movement, short of a radical reordering of the world’s economy and politics. Instead, US political debate centers on how directly this flow should be used for its ability to create wealth for those who employ it, and over the legal status and rights of migrants themselves.

US industrial agriculture has its roots in slavery and the brutal kidnapping of Africans, whose labor developed the plantation economy, and the subsequent semi-slave sharecropping system in the South. For over a century, especially in the West and the Southwest, industrial agriculture has depended on a migrant workforce, formed from waves of Chinese, Japanese, Filipino, Mexican, and, more recently, Central American migrants. Today, a growing percentage of farmworkers are indigenous people speaking languages other than Spanish, an indication that economic dislocation has reached far into the Mexican countryside’s most remote parts.

Repeated waves of immigration raids and deportations are not intended to halt migration. Immigrant labor plays such a critical part in the economy that the price of stopping migration would be economic chaos. The intention of immigration policy since the Chinese Exclusion and Alien Land acts of the late 1800s is managing the flow of people and determining their status in the United States in the interest of employers.

The political fault lines that divide the US immigrant rights movement are determined by decisions to either support this general trend in policy and its political advocates in Washington, DC, or to oppose it and create a social movement for equality and rights based in migrants’ own communities. Those fault lines were set in place thirty-five years ago, when the 1986 Immigration Reform and Control Act criminalized work for undocumented migrants and resurrected the contract labor programs that were ended in 1964 with the abolition of the Bracero Program. Current debates over immigration policy must choose between these alternatives, and this choice will govern the approach to immigration under a new Biden administration.

The largest US guest worker program, the recruitment of migrants by agribusiness through the H-2A work visa, has its historical roots in the earlier Bracero Program of the Cold War period, from 1942 to 1964. The exploitative conditions and vulnerability of migrants who came under that program are very close to those of the H-2A program today.

During the Bracero period, immigration enforcement by a growing US Border Patrol and government bureaucracy was used to create labor shortages, which then provided the rationale for vastly expanding the recruitment of contract labor: the braceros. Today, the impact of immigration enforcement is very similar. Raids and the use of employer sanctions (prohibiting the employment of people without legal immigration status) are directly used to require the substitution of an H-2A workforce for undocumented workers.

The H-2A program does not just provide a replacement for undocumented labor. It also impacts farmworkers already in the United States, both documented and undocumented. The program has been used repeatedly to replace workers with residence visas or who are US citizens. Legal protections against such replacement are ineffective, and enforcement of those protections by the Department of Labor is virtually absent.

Intensifying a Race to the Bottom

Some of the largest H-2A worker recruiters have enormous influence over immigration policy and its enforcement. With no limits on the number of visas issued annually, their recruitment has mushroomed from 10,000 workers in 1992 to more than 250,000 in 2020 — one-tenth of the US agricultural workforce.

A system in which workers with H-2A visas are put in competition with a domestic labor force depresses all farmworkers’ wages. Even mild protections that should provide a wage floor are easily swept aside, as the Trump administration did by issuing executive orders effectively cutting H2-A wages in 2020. (Those orders were challenged in court, and later rescinded by Joe Biden upon taking office.) The growth of the H-2A program has exacerbated the existing housing crisis for rural workers and impacted their living conditions. While some states seek to limit grower access to government housing subsidies, other states encourage growers to use them to build more barracks for contract workers.

Guest workers are pressured to speed up their work, which then increases pressure on other farmworkers around them. When H-2A workers try to organize against exploitative conditions, the H-2A visa allows employers to terminate their employment and end their legal visa status — in effect deporting them. Workers can then be legally blacklisted, preventing their recruitment to work in future seasons.

Although farmworkers were officially declared “essential workers” during the COVID-19 pandemic, the declaration did not increase workers’ rights, provide protection from the virus, nor result in a living wage. Instead, H-2A workers were particularly vulnerable to contracting the virus because of the structure of the program, in which they live in congregate housing and travel to and from work in close proximity. The power of the growers and contractors using this program was clearly demonstrated by their successful effort to maintain dangerous housing conditions in Washington State and the lack of regulation of housing conditions in California. The coronavirus crisis only added extreme health risks to a bedrock of the inequality and exclusion suffered by H-2A workers generally.

The gross imbalance of power between H-2A workers and growers makes it impossible to implement meaningful worker protections. Yet efforts to expand the H-2A program have garnered political support among both Democrats and Republicans. The Farm Workforce Modernization Act, the most important of these bipartisan efforts, would likely lead to half the farm labor workforce in the United States laboring under the H-2A program within a few years — five times the already large number of H-2A workers currently.

Intensifying a race to the bottom for all farmworkers in the United States, the consequences would be disastrous, as it would likely limit any growth in wages, increase workers’ vulnerability to employer pressure, undermine their bargaining power, and increase the already heavy obstacles to independent worker organization and unions.

Real change for H-2A and resident farmworkers requires upsetting the balance of power between workers and growers, and the government that protects them. The choice confronting the Biden administration is whether to expand an immigration program prioritizing grower profits over workers’ and immigrants’ rights, or to reinforce an immigration system based on family reunification and community stability, while protecting the wages, rights, health, and housing of farmworkers — the alternative advanced by the civil rights movement over half a century ago.

This article summarizes the conclusions of a report by the Oakland Institute, Dignity or Exploitation — What Future for Farmworker Families in the United States?, issued on February 18, 2021.

David Bacon is a California writer and documentary photographer. A former union organizer, today he documents labor, the global economy, war and migration, and the struggle for human rights.