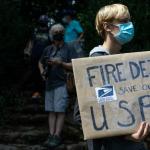 Just days after Postmaster General Louis DeJoy unveiled a 10-year restructuring plan that would reduce Post Office hours, increase postage prices, and slow down first-class mail delivery, a group of House Democrats on Friday introduced legislation to prevent DeJoy from implementing a key aspect of his latest assault on the U.S. Postal Service.

The bill—called the Delivering Envelopes Judiciously On-time Year-round Act, or DEJOY Act—would prohibit the USPS from "lengthening mail-delivery windows and require it to adhere to present service expectations," as the Washington Post reported.

Rep. Raja Krishnamoorthi (D-Ill.), who introduced the DEJOY Act with six Democratic co-sponsors, told the Post that "going from 100% of first-class mail being delivered one to three days to only 70%, would be a nonstarter, in my opinion, with the American people."

Earlier this week, DeJoy—a Republican megadonor with no previous USPS experience whose scandal-plagued tenure as postmaster general began last June after he was picked for the role by a postal board controlled by appointees of former President Donald Trump—released a 58-page document (pdf) outlining a plan to avoid an estimated $160 billion in operating losses over the next decade through aggressive austerity measures.

One area of agreement between the postmaster general and congressional Democrats is their mutual support for repealing a 2006 law that requires USPS to prefund retiree benefits decades in advance—a mandate that postal advocates say is a key source of the agency's financial woes.

But DeJoy's insistence on pairing the repeal with further cuts that would undermine the crucial institution's ability to deliver medications, paychecks, and bills on time has led to growing calls for his ouster.

In a letter to the postal board demanding the immediate termination of DeJoy, Sen. Tammy Duckworth (D-Ill.) argued Thursday that the postmaster general's "pathetic 10-year plan to weaken USPS demonstrates that he is a clear and present threat to the future of the Postal Service and the well-being of millions of Americans."

Duckworth continued: "The only question facing the USPS Board of Governors right now is whether PMG DeJoy is the best individual to lead the Postal Service moving forward. Based on the PMG's performance to date, the answer is clear: no. Failure to remove PMG DeJoy will confirm my worst fears about each member of this Board of Governors. Namely, that you are unwilling to admit error and thus incapable of fixing a grave mistake."

The opening section of the new strategy document was co-authored by Ron Bloom, the Democratic chairman of the USPS Board of Governors, which suggests that the postal board backs the proposed changes even though they could worsen nationwide mail slowdowns caused by the operational overhaul DeJoy imposed last year as the coronavirus pandemic increased the demand for mail-in ballots.

Soon after the DEJOY ACT was introduced on Friday, Sen. Bernie Sanders (I-Vt.) tweeted: "No. We will not allow Trump's handpicked Postmaster General Louis DeJoy to slow down mail delivery, cut hours at post offices, and sabotage the Postal Service. We will expand and strengthen it. It is way past time to fire Mr. DeJoy."

Journalist and author John Nichols warned earlier this week in The Nation that "if President Biden does not take the necessary steps to begin the process of removing DeJoy from his position, the postmaster general's austerity agenda threatens to ruin the USPS at a point in its 246-year history when the service is every bit as essential as it has ever been."

Because President Joe Biden does not have the authority to remove DeJoy himself, dozens of House Democrats are urging Biden to immediately terminate all six sitting members of the postal board and quickly replace them with officials willing to fire the postmaster general and protect the USPS as a vital public good.

Although the president has the power to remove members of the postal board "for cause," he has thus far declined to take such a sweeping step, opting instead to nominate officials to fill the board's three existing vacancies. If Biden's nominees are confirmed by the Senate, Democrats on the board could have the votes needed to oust DeJoy and save the USPS.

Critics say that time-consuming option is not good enough. Earlier this week, Rep. Bill Pascrell, Jr. (D-N.J.)—who in January became the first member of Congress to call on Biden to replace every sitting member of the postal board with officials who support removing the postmaster general—criticized the postal board "for their silence and complicity" and reiterated that Biden must fire every member, which would make it possible to get rid of DeJoy "before he destroys the entire USPS for good."

"The board has remained silent in the face of catastrophic and unacceptable failures at a moment when the American people are relying on the Postal Service the most," more than 50 House Democrats wrote in a letter to Biden last week. "It is time to remove all governors and start over with a board vested with the expertise and acumen this nation needs in its Postal Service leadership."

As journalist Mindy Isser pointed out Friday in Jacobin, "The post office has been under attack for decades, with Republicans and centrist Democrats repeatedly trying to make the public service function like a private business. But DeJoy's leadership could be the nail in the coffin, if Joe Biden doesn't act swiftly."

"The only way to begin to defend the post office," she added, "is to fire DeJoy."