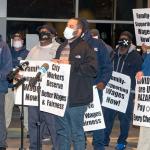 When Virginia changed its law last year to allow local government workers to bargain collectively, it was a leap forward in a time when the trend is generally in the opposite direction.

As always, the devil is in the details—and there’s a lot of devilry here. But the change presents a substantial opening for unions. Now teachers, firefighters, and sewer workers are getting organized and pushing local governments to bargain over such issues as pay and staffing.

Bargaining is still banned for state employees. But the new law, which takes effect May 1, allows cities, counties, and towns to bargain with their employees, an activity that had been expressly forbidden since a 1977 state Supreme Court ruling, codified by a 1993 law.

Counties and municipalities can now pass local ordinances to establish collective bargaining rights—if they choose. The law sets up a loose process, with huge parts left up to local interpretation. A majority of workers in a unit can petition the employer. The governing body, such as a school board or city council, must then vote on whether or not to allow collective bargaining.

The employer can still vote no and ignore the petition. Local governments will also determine procedures for certification and decertification, and the scope of what can be bargained.

This setup means that the right to bargain will be very uneven, depending not only on union strength but also on the political makeup of local governments. Ultimately Virginia could end up with as many labor relations schemes as it has counties, towns, cities, and school districts.

Some could choose Wisconsin-style systems where the only topic allowed is raises, capped at inflation, while others could provide more expansive bargaining rights like those of public sector workers in New Jersey and California. Some could grant bargaining rights to police and firefighters but not to sanitation workers or clerical staff.

Virginia’s union density is one of the lowest in the country. At 4.4 percent, it’s tied for fifth-lowest (with Tennessee), behind Utah, South Dakota, and the Carolinas. For comparison: Virginia has about the same population as New York City, the most heavily union city in the country; Virginia has 164,000 union members, while New York City has 695,000.

The 1977 ban on collective bargaining did not eliminate public sector unions in the state. The Virginia Education Association, the Firefighters (IAFF), AFSCME, Service Employees, and the United Electrical Workers (UE) have each maintained a presence despite the challenges of organizing with no bargaining rights. These groups have a foothold to build on.

Josh Turner is a fire department captain and president of IAFF Local 2141 in Alexandria, where the union expects to win collective bargaining. “It’ll bring morale up,” he said. “People will feel more in control of their day-to-day lives.” But the first ordinance proposed by Alexandria’s city manager didn’t measure up to what local unions wanted to see—it limited bargaining to wages and benefits—so they pressured the city council to send it back for more work.

Brian Lynch, a firefighter/paramedic and the president of the Arlington Professional Firefighters (IAFF Local 2800), wants to bargain for demands that impact the community. “We want to bargain over staffing our fire trucks,” he said, “how many people show up when your house is on fire.” The union did a study and found that the number of firefighters per truck responding to a fire had a greater impact than the number of fire trucks on loss of life and value of damage.

The local governments of both Alexandria and Arlington are dominated by Democrats and tend to lean progressive. Still, “we have to convince the leaders in our jurisdictions that they have to live the values that the Democratic Party speaks about,” Lynch said. He expects the bargaining ordinance to pass, but it has met opposition from “municipal managers and bureaucrats who don’t want to cede any power,” he said. “They’re afraid of losing unilateral authority.”

And that’s Northern Virginia. “Other parts of the state are deeply red and the political environment is much more hostile to unions,” Lynch said. “In other areas we’re going to have an uphill battle.”

Democrats in Virginia have not been friends of the labor movement for some time. The last time that Democrats held a “trifecta” of control in Virginia (governor, state house, state senate) was in 1993, when they passed the public sector bargaining ban. Tim Kaine, Hillary Clinton’s 2016 running mate, supported “right to work” when he was governor.

Unions were hoping that under the current Democratic trifecta, in place since 2019, they could not only win statewide public sector bargaining, but also repeal the right-to-work law. Both these changes were put up to votes in separate bills, but legislators shot down the right-to-work repeal and negotiations between House and Senate Democrats peeled away statewide public sector bargaining, leaving only the lifting of the local ban.

UE is appealing for funds to support its organizing drives with municipal workers in Virginia Beach and across the state. You can donate here.

Virginia Beach is in the southeastern corner of the state, bordering North Carolina. It’s Virginia’s largest city, with the biggest concentration of local government workers.

City workers there were spurred into action by the pandemic. In August, a group of sanitation workers organized a strike to demand hazard pay, after they heard that other city workers would be getting money through a coronavirus relief bill but they would not. The strike shut down trash collection for a full day—and workers got the bonuses.

Through last summer and into the fall, UE helped municipal workers campaign for a higher wage scale, an end to management’s threats and abuses of power, City Manager meetings with elected worker representatives from each department, and the right to bargain collectively. Workers collected 300 signatures on a petition and delivered it to the city manager and the city council.

UE has been organizing in Virginia for years, largely with state employees who are still banned from bargaining. The union maintains a local at William & Mary, a state university. In neighboring North Carolina, UE Local 150 has sustained a presence dating back to the 1990s among public sector workers. Now that the ban in Virginia has been repealed, North and South Carolina are the only two states that still outright ban public sector collective bargaining.

The Virginia Beach city workers union, UE Local 111, is seeking to represent the 700 workers in the city’s public works and public utilities departments, who do such jobs as maintaining sewers, collecting trash, and mosquito control. Though Covid has exacerbated some concerns on the job—raw sewage can carry the virus, for example—many of their issues predate the pandemic.

Several years ago, the city instituted a new tier of jobs, referred to as “hybrid.” Workers in this tier receive fewer benefits, worse pay, and no sick days. “Right now I’m on a crew and the guys who have worked there a little bit longer have a completely different set of benefits,” said Eric Ellerbe, a street maintenance worker. “We should be treated equal.”

Workers now start at $11-$12 an hour, even those required to have a Class A CDL, the top commercial driver’s license.

“They want Rolls Royce service, but they only want to pay for Jiffy Lube,” said Marvin Tatem, a sewage worker who has worked for the city for 27 years. “None of the hybrid employees can afford to live here. I see these guys coming in to work every day and I don’t know how they keep doing it.”

City workers are building majority support in these departments one co-worker at a time. “I’ve got a list, and I’m going out and signing people up on union cards,” said Ellerbe. “It’s just a matter of having conversations with people—keep drilling it and hope that they’re receptive.” Organizers meet regularly via Zoom to exchange updates.

The challenge will be convincing their employer to negotiate. “The only bottleneck is the city council. Some of them are just old, outdated relics who unfortunately aren’t going anywhere,” said Tatem. “As far as us having the people, we’ve got that. As far as the council backing us on it, they don’t want that.”

But he doesn’t plan to back down: “I’ve been out there, knee-deep in their shit, and it’s my right to speak out.”

The Virginia Education Association was perhaps the driving force behind the repeal of the collective bargaining ban. VEA’s 40,000 members account for a quarter of the state’s total union membership.

Teacher Brian Teucke, a local union president in Gloucester, 70 miles north of Virginia Beach, sees a significant opportunity to build power, if unions are willing to work for it: “People who have been stuck in a rut about how they look at their job—‘it’s always been this way, always will be this way’—are realizing that the union can be a way to address their concerns.”

The issues Virginia educators face will be familiar to others. “Bully bosses, bully principals,” said Teucke. “The ladder-climbing, egotistical, condescending bosses.” Educators also struggle with low wages—the average teacher’s salary in Virginia is around $9,000 per year less than the national average—and high turnover.

The lack of bargaining rights has “caused some to view unions as social clubs and not organizations that fight for workers,” said Mary Vause, an elementary school English as a Second Language teacher and a board member of the Newport News Education Association. “Collective bargaining is a great opportunity for us to show our power.”

Chanel Hurt, a middle school music teacher and NNEA board member, said the prospect is “forcing us to go through all the steps of figuring out who the leaders are, getting contact lists, going through the building. It’s forcing us to do all those things that we should have been doing all along.”

In Gloucester, Teucke is planning a campaign to engage a broad swath of school district staff—as well as parents. “[We] want the school board to have to respond to not just the union, but all of us” who live in the district, said Teucke. His local plans to engage member-organizers to talk with school staff, parents, and community organizations. The local has also decided to organize the broadest possible definition of the bargaining unit, including support staff like bus drivers, groundskeepers, custodians, and paraprofessionals.

Teucke is also a VEA district president and on its board of directors, as well as a member of the Virginia Caucus of Rank-and-File Educators (VCORE). He pulled together a group of organizers in his region to present what a campaign for collective bargaining could look like. Vause and Hurt, both VCORE members, say this effort made their local take collective bargaining more seriously.

In other districts, the terrain is much different. Hannah Clayman is a middle school special education teacher in Prince George County, south of Richmond, which has a conservative school board. Clayman doesn’t think her union is in a position to win collective bargaining this year, because of its low membership, low engagement, and open officer and steward positions.

Nonetheless, she thinks that it’s important to use the fight to help build her union into one that can eventually win collective bargaining. In her position as a building representative (union steward), she’s been asking her co-workers to “think about what if you took that anger that you have, and got together with other people to do something about it.”

A version of this article appeared in Labor Notes #505, April 2021. Don't miss an issue, subscribe today.

Joe DeManuelle-Hall is a staff writer and organizer at Labor Notes.