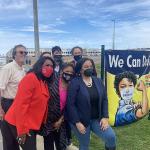 Workers at the Amazon fulfillment center have voted in a National Labor Relations Board election to ascertain if a majority of those voting wish to be represented by a union. Votes are being counted. Should a majority of workers vote for the Retail Wholesale and Department Store Workers, Amazon should agree to recognize the union and bargain with them. I say “should” because Amazon may find ways to challenge the vote, appeal its result or force the union into court to get the law enforced.

All people who value worker rights have their hopes on an election win for the union at Amazon. Likewise all those who seek to maintain the current system of employment at will, privileges instead of rights and discrimination in employment are also looking at Bessemer.

No matter what the outcome it might be useful to look at Bessemer with a bit of historical perspective. An argument can be made that the National Labor Relations Act established a system to take the fight for union recognition off the streets, out of the workplaces and into the ballot box.

The movement started in 1934 with the longshoreman’s strike in San Francisco. Eventually turning into a genera l strike the union forced the maritime association to recognize it, establish the hiring hall and other fundamental worker rights on the job. Workers throughout the country were thrilled. What followed in 1935,36 and 37 was a wave of direct action of many sorts. The sit-down strikes at General Motors were but one example of hundreds. In the GM case the company was forced to recognize the United Autoworkers in Flint, the heart of the GM Empire.GM also agreed to deal with the union in all other GM facilities where it had a presence. By 1938 as a result of a work stoppage at one of its major locations in Lynn, the defeat off the company union in Schenectady and work actions in many places the General Electric Company recognized the United Electrical Workers. The United States Steel company, speaking for the largest steel manufacturers of the time also agreed to recognize the Steel Workers desiring to avoid the increasingly radical confrontations in steel towns all across the United States.

A victory at Bessemer would be great. But even without that workers at Amazon, Walmart, and Microsoft will continue to organize. Why? Because management can never represent the interests of the workforce.

In the late 1930ies there many National Labor Board elections, but they took place after direct action by workers in the basic industries of time broke the back of union resistance by most industry leaders.

It is worth noting that the beginning of the twentieth century the union drives were defeated by the corporations in all of the new technically based industries--- electrical; General Electric, auto; General Motors and others, and all the steel companies. These were the new industries of the time just as we have new industries of our time-Microsoft, Walmart, Amazon, Epic and many others. The new industries of their day looked impregnable. But workers, often with leadership from various socialist and communist organizations began to organize.  Bit by bit they grew in plant organizations but they grew because they were also rooted in the communities from which the work force came. Today we face a different societal structure, but we also have different organizing tools.

So whatever the outcome in Bessemer, there is every reason to believe that the workers in our new industries will react the same way workers in the past responded to defeats - they continued to organize because, in reality there is no substitution for a union in the workplace.

[Frank Emspak, was director of WIN, Workers Independent News radio, was a labor educator and a shop steward at Lynn GE plant in earlier decades.]