The Enormous Impact of Eroded Collective Bargaining on Wages 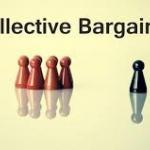 Recent research on trends in wages over the last four decades has demonstrated that:

Researchers have long demonstrated the connection between being represented by a union and earning higher wages. This advantage, called the “union wage premium,” measures the percent difference between the wages of unionized workers and those of nonunionized workers with the same characteristics. That collective bargaining also leads to more equal wage outcomes was firmly established by Richard Freeman and James Medoff in the late 1970s and popularized in their important 1984 book, What Do Unions Do? (Jake Rosenfeld’s 2014 book, What Unions No Longer Do, provides an update of the issues). Of primary importance are the ways in which collective bargaining leads to more equal wage outcomes among unionized workers and in unionized industries and occupations.4 First, unions make wage differences between occupations more equal because they give a larger wage boost to low- and middle-wage occupations than to high-wage occupations. Second, unions make wages of workers with similar characteristics more equal because wages are “standardized” in union settings, meaning that wages are set for particular types of work and do not vary much across people doing the same work, at least not to the same degree as in nonunion settings. Third, unions have historically been more likely to organize middle-wage than high-wage workers, thereby lowering inequality by closing gaps between, say, blue-collar and white-collar workers.5 Last, where unions are strong the wages of comparable nonunion workers are also increased. The bottom line result of these influences is that being represented by a union or being in a heavily unionized industry or occupation has boosted wages for low-wage workers in these settings the most, and these union wage boosts have been larger at the middle than at the highest wage levels, larger for Black and Hispanic workers than for white workers, and larger for those with lower levels of education. This pattern of wage increases narrows wage inequalities. That unions have disproportionately benefited Black workers and workers with low and moderate wage levels and lower levels of education has been true as far back as the 1940s (Farber et al. 2018). The union impact on inequality is even greater when measured with total compensation (wages plus benefits) than with wages alone (Pierce 1999).

Research from the early 1990s documented that the erosion of collective bargaining was responsible for around a fifth of the rise in wage inequality among men in the 1980s (Card 1991; DiNardo, Fortin, and Lemieux 1996; Freeman 1991) but had a more modest impact among women.

Recent research assessing the impact of unions on nonunion workers’ wages—sometimes referred to as “spillover effects”—finds an even larger impact of deunionization on wage inequality. When the share of workers who are union members is relatively high, as it was in 1979, wages of nonunion workers are higher. For example, had private-sector union density in 2013 remained at its 1979 level, weekly wages of nonunion men in the private sector would have been 5% higher, equivalent to an additional $2,704 in earnings for year-round workers; among those same workers but without a college education wages would be 8% higher, or $3,016 more per year (Rosenfeld, Denice, and Laird 2016; Denice and Rosenfeld 2018).6 Consequently, estimates of the impact of eroded collective bargaining on wage inequality that incorporate union spillover effects find a larger role of the impact of unions on wage inequality than do studies that focus on unionized workers alone. For instance, Western and Rosenfeld (2011, Table 2 and analyzed in Mishel et al. 2012, Table 4.38) find that the weakening of collective bargaining explains a third of the increase in wage inequality among men and a fifth of the rise of wage inequality among women over the 1973–2007 period. This research demonstrates that the erosion of collective bargaining has been the largest single factor driving a wedge between middle- and high-wage male workers, the primary feature of rising wage inequality among men (other than the pulling away of the top 1%).7

The most recent research on the effect of eroded collective bargaining on wage inequality, conducted by Fortin, Lemieux, and Lloyd (2021) and summarized in Table 1, incorporates a spillover effect and reports directly on the impact of eroded collective bargaining on the wage gap between high-wage (90th percentile) and middle-wage (50th percentile) workers by gender.

Note: The wage gaps represent the difference between wages of workers at different percentiles in the wage distribution, where the 50th percentile worker is the median worker.

Midcentury unions were a powerful force for greater equality

Newly developed historical data from the early postwar period affirm that collective bargaining was a strong force for greater equality of wages. For instance, Callaway and Collins (2017), using data from a survey of men living in Philadelphia; New Haven, Conn.; Chicago; St. Paul, Minn.; San Francisco; and Los Angeles in 1951, found “the [union] wage premium was larger at the bottom of the income distribution than at the middle or higher, larger for African Americans than for whites, and larger for those with low levels of education,” findings that are “consistent with the view that unions substantially narrowed urban wage inequality at mid-century.” It follows, of course, that the consequent erosion of collective bargaining would increase wage inequality and have the most adverse impact on nonwhite workers, workers with the least education, and low- and moderate-wage workers.

Likewise, Farber et al. (2018, 33), who developed data on union households from Gallup surveys going back to 1936, found that “mid-century unions [were] a powerful force for equalizing the income distribution.” This happened because unions disproportionately represented “disadvantaged” workers (nonwhite or less educated), raised the wages of low- and moderate-wage workers the most, and had a large, stable impact of raising wages for union workers by roughly 15–20 log points over the last 80 years.10

Worker preferences and automation are not the cause of union decline

Some pundits and analysts, skeptical about the impact of weaker unions on wages or wage inequality, claim that the decline of unions reflects a decline in worker interest in unions or is due to globalization and automation, i.e., union decline itself is caused by other factors (is endogenous) and therefore should not be considered the cause of wage decline. Neither contention—that workers no longer care for unions or that automation is what led to union decline—is well founded.

Kochan et al. (2018) examined the level of interest in joining a union among unorganized workers and found that the “demand for unions” has risen substantially since the late 1970s. Kochan and Kimball (2019) described these results as

These findings indicate that there has continuously been a large unmet demand for collective bargaining over the last four decades.

As for the role of globalization and automation in union decline, Mishel, Rhinehart, and Windham (2020) found that the shrinkage of manufacturing from ongoing automation and globalization indeed contributed to the shrinkage of employment and the loss of union jobs, but the declines in that sector can account for only a small portion of deunionization, perhaps 15–20%. They also note that the share of workers covered by collective bargaining declined strongly across the private sector in industries not heavily affected by globalization, such as construction, transportation, communications, utilities, supermarkets, hotels, and mining. So, any focus solely on manufacturing will not capture the full picture of union decline. Moreover, the erosion of unions in manufacturing is not due only to automation and globalization.

An Organisation for Economic Co-operation and Development (OECD 2019) analysis of the cross-country decline in collective bargaining across advanced nations found that, “Contrary to a commonly held belief, the combined contributions of demographic changes and structural shifts, such as the shrinking of the manufacturing sector, are small and leave most of this declining trend [in collective bargaining] unexplained.”

This conclusion confirmed an earlier finding by Schmitt and Mitukiewicz (2012) that “national politics are a more important determinant of recent trends in unionization than globalization or technological change.”

Then why has collective bargaining eroded? The primary reason was a concerted corporate attack on unions, starting in the 1970s, that exploited weaknesses in our labor laws to suppress the ability of workers to choose collective bargaining and organize (Windham 2017). The scale of union organizing collapsed dramatically in that decade as the share of nonagricultural workers in private-sector National Labor Relations Board elections fell from 1.0% to 1.2% each year in the 1950s and 1960s to just 0.3% each year in the 1980s and to 0.1% each year in the early 2000s (Mishel, Rhinehart, and Windham 2020). As Windham (2017) documents, this collapse of organizing was due to increased employer aggressiveness and use of both legal and illegal tactics, including captive audience meetings (meetings delivering anti-union messages that employees must attend or else be disciplined or fired), threats of shutdowns or relocation, firing of union organizers, use of a rapidly expanded group of anti-union consultants, and process delays.

Conclusion: Widening wage inequality is a policy decision that can be reversed

Between 1979 and 2017 the growth of productivity (net of depreciation) grew far faster than the inflation-adjusted growth of hourly compensation (wages and benefits) of the typical, or median, worker (Mishel and Bivens 2021). This divergence is the consequence of policy decisions made on behalf of wealthy interests and corporations, and they include acts of omission (failing to raise the minimum wage or improve labor law) and commission (the Federal Reserve targeting inflation goals and raising interest rates in a way that leads to excessive unemployment to restrain wage growth and policymakers pursuing corporate-driven globalization).

In other words, wage growth has been greatly directed by policy decisions and is a political variable. It responds—robustly—to big policy changes. Policymakers can deliver prosperity to the vast majority of U.S. workers based on faster wage growth. Whether workers obtain a fair share of the economy’s gains in the future will depend not so much on abstract forces beyond their control but on demanding that their political representatives restore bargaining power to workers, individually and collectively. Legislation that expands collective bargaining by enabling workers to choose union representation and strengthens union rights is critically important to the enterprise of restoring robust wage growth.