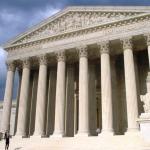 President Joe Biden won praise Friday for signing an executive order to create a 36-member commission that will analyze arguments for and against reforming the U.S. Supreme Court.

The White House announced that a "bipartisan group of experts" will spend the next six months considering the "merits and legality" of increasing the number of justices on the high court and imposing term limits, among other possible changes.

"Congress has the power, and the constitutional duty, to set the size of the court, as it has seven times throughout our history."
—Rep. Mondaire Jones

Although the commission "will not make final recommendations for reform," CNN reported, many, including Rep. Mondaire Jones (D-N.Y.), applauded the president's move.

"The answer to that question is clear," Jones continued. "To restore our democracy, we must expand the Supreme Court. Anything less would leave the future of our nation, our planet, and our fundamental civil rights at the whim of a far-right supermajority that is hostile to democracy itself."

As CNN noted, "The long-awaited commission announcement developed from a pledge Biden made as a candidate last October, as liberals were calling for additional seats to be added to America's high court, to try to bring greater balance to a bench dominated 6-3 by conservatives poised to continue its right turn on abortion rights, religious liberty, and voting restrictions."

While right-wing media personalities like Sean Hannity accused Biden—who has said he's "not a fan" of expansion—of flip-flopping on the issue and GOP lawmakers such as Rep. Jim Jordan (R-Iowa) asserted that "Democrats want pack the Supreme Court," advocates for reform argue that the high court must be unrigged after Republicans distorted its makeup while benefitting from anti-democratic institutions like the Electoral College and antiquated rules in the U.S. Senate.

Even though then-Senate Majority Leader Mitch McConnell (R-Ky.) had refused in 2016 to seat Merrick Garland, former President Barack Obama's pick to replace Justice Antonin Scalia following his passing on February 13 of that year—claiming that doing so would be inappropriate when the president was "on his way out the door"—McConnell rushed through Barrett's confirmation just days before the 2020 election.

Earlier this week, Justice Stephen Breyer—an 82-year-old liberal who is facing calls to retire so that Biden and the Democratic-led Senate can fill his seat with a progressive—warned that "if the public sees judges as politicians in robes, its confidence in the courts, and in the rule of law itself, can only diminish, diminishing the court's power, including its power to act as a check on other branches."

Breyer said that reformists should think "long and hard" about their proposals for "structural change or other similar institutional change."

[W]here on Earth has he been over the past two decades as the Supreme Court delivered one partisan decision after another? Napping? Sen. Sheldon Whitehouse (D-R.I.), a member of the Judiciary Committee, has tallied "80 5-4 partisan decisions by Republican Justices giving victories to big Republican donor interests" in the 15 years since Chief Justice John Roberts was sworn in in 2005. Does Breyer really believe these rulings—in which he dissented!—were all guided by "legal principle, not politics"?

... As for "confidence" in the Supreme Court, how about the fact that a majority of the nine justices were appointed by presidents who lost the popular vote? Or that one of those five, Neil Gorsuch, is sitting in a blatantly stolen seat? Or that two of the nine justices, Brett Kavanaugh and Clarence Thomas, have been credibly accused of sexual misconduct?

... It feels odd for me to have to remind a sitting justice that nowhere in the Constitution does it say there should be nine justices on the court. The court's own website says, "The Constitution places the power to determine the number of Justices in the hands of Congress." In fact, if Biden does eventually yield to pressure from liberal activists and Democratic lawmakers and decides to change the size of the court, backed by a congressional majority, he will be following in the footsteps of five previous presidents.

As AP noted Friday: "The size of the court has been set at nine members since just after the Civil War. Any effort to alter it would be explosive, particularly at a moment when Congress is nearly evenly divided. Changing the number of justices would require congressional approval."

In his statement, Jones noted that "many Americans will rightly be skeptical of a commission composed almost entirely of people protected from the real-life consequences of the Supreme Court's right-wing extremism."

"Nevertheless," he said, "I remain hopeful that the commission will join our rising movement for court expansion."

"In the meantime, Congress has the power, and the constitutional duty, to set the size of the court, as it has seven times throughout our history," Jones added. "My colleagues and I need not wait for the findings of a commission. We know the obvious: we must expand the Supreme Court before it's too late."