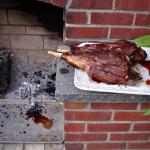 On November 4, 2020, the eyes of the nation were trained on local election officials as an unprecedentedly mail-heavy ballot count hung in the balance. As Clark County, Nevada, Registrar of Voters Joe Gloria calmly delivered an update to reporters outside the election center in a Las Vegas warehouse and office park, a sunburned, chin-masked man lumbered up behind him to yell words that were conspiratorial, nonsensical, and not worth regurgitating, even as the three-word manifesto on his raggedly de-sleeved red, white, and blue shirt came through loud and clear: BBQ BEER FREEDOM.

Said barbecue likely was not plant-based. The conflation of meat, "freedom," and masculinity is not a modern phenomenon in Western society by any means; think Homer's heroes feteing the gods with a hallowed sheep feast in ancient Greek texts a few millennia before Homer Simpson counseled his vegetarian-curious child—through song and a conga line—that, "You don't win friends with salad." It just happened to get a particularly strong reinforcement in the last century or so from male-targeted media and advertising—making today's plant-based meat products somewhat of a tougher sell to a population weaned on the heteronormative notion that a "real" man is practically teething on a T-bone, acquiescing to the occasional vegetable only when nagged or guilted by his female partner.

Just for historical funzies, the 1949 Esquire's Handbook for Hosts opens with the assertion that, "The world's greatest cooks are men. Since the beginning of time, he-men have always prepared the savory dishes that caress the palates of epicures of every nation." The handbook goes on to  slam "woman's magazine salads" and "doily tearoom fare," making a curious claim that "women don't seem to understand fish" and declaring that a game-based stew is "second only to steak in its standing as a Man's Dish." Sixty two years later, Esquire's Eat Like a Man: The Only Cookbook a Man Will Ever Need (based on the mag's column of the same name) may have dropped the eye-poppingly racist illustrations of male cooks from other lands, as well as the aggressively misogynistic rhetoric, but still, the front cover boasts an obligatory black-and-blue bone-in steak and the back, a list of 15 male contributing chefs, and an asterisked aside that women could benefit from the book as well because "we're not exclusive."

In the interregnum between the editions and the years since, Esquire was hardly the only publication or entity stoking this particular notion of carnivorism (and to be fair, in the decade since the latter book came out, Esquire's coverage has evolved tremendously—specifically calling out the "fragility" of that macho mindset, and touting the virtues of various plant-based products). Notable texts of the genre include Bruce Feirstein's tongue-in-cheek (buuuuuut also pretty steeped in some pretty gnarly notions) 1982 Real Men Don't Eat Quiche: A Guidebook to All That Is Truly Masculine and the follow-up volume he edited, Real Men Don't Cook Quiche: The Real Man's Cookbook, which include a bizarre amount of anti-French sentiment, a recipe for cream of beer soup, and passages like, "Steak is the Real Man's birthday cake … The way we see it, telling a real man how to prepare his steak would be like telling him how to ride his horse, drive his car, or make love to his girlfriend. And among Real Men, this just isn't done." There are lists like "14 Things You Won't Find in a Real Man's Stomach," including tofu, bean curd, light beer, yogurt, and "arugola" [sic] salad.

That sentiment wasn't relegated to the twentieth century either. A 2006 Burger King commercial co-opted Helen Reddy's "I Am Woman" to become an anthem for men too hungry for vegetable-based "chick food." Alt-right demagogues like Alex Jones strip to the waist to eat sausages while his guests decry the "soy boys" they claim have been "feminized" by the consumption of alt-meat. Conservative pundit-psychologist Jordan Peterson extols the benefits of a highly questionable all-meat diet in an appearance on the Joe Rogan podcast. Free speech abounds, y'all.

Ross Mackay was up against years—if not centuries and millennia—of this notion of dude food when he launched the plant-based chicken company Daring in the United States in March 2020. Growing up in Glasgow, Scotland, "We made our legacy on Scotch beef and salmon and whisky, and black pudding is a tradition," Mackay said in a phone call. "There, I lived in a world where 'real' men eat meat." And when as a 17-year-old student athlete, coming from a very health-conscious family, he decided to eliminate animal products from his diet for the purpose of performing at a higher level, it was a fairly lonely pursuit. "I was the only one of my friends and I was the only one in my school and I was the only one at my college."

But despite any naysayers, he trusted what his body was telling him—that it felt and functioned better—and he eventually found solidarity with a friend, Eliott Kessas. The two worked their way through all the traditional meat alternatives available in the UK, but questioned the ubiquity of corn in them, the overly processed ingredients, the less than satisfactory flavor, the lack of protein. Convinced that they could develop a better alternative, the duo developed a plant-based chicken, raised $10 million in investment at the end of 2019, and moved to Los Angeles, where they banked on finding an even more receptive audience for their wares. It was a leap of faith, but as MacKay says, the entire ethos of the company—starting with the name "Daring"—is about taking these risks in the face of naysayers, even those who get all weird about the notion of what it means to be a man who says nae to a bucket of KFC.

But it's one thing to develop a product that you truly believe is a truly superior option to an animal product for both health and environmental issues, and quite another to get men, steeped since birth in these messages of machismo, to even try it. Mackay believes he can lead by example. Now 29, he presents himself as living proof. "We're daring by name and by nature, but our business evolved really to challenge the status quo. We've been told for so long that meat is integral to our livelihood and we've challenged that as finders in terms of performance. I can perform and I can compete in sporting competitions and operate at my maximum while not consuming meat. You've got to look at your brand and your messaging and your marketing efforts and then probably in turn your distribution."

"So our brand, we've really tried to appeal to the wider audience. I think males specifically look for macronutrients, so protein. 'Can I get my protein in? Where do you get your protein in?' We've created a product that is appealing to its consumer, specifically the male demographic who is more concerned with macronutrients than potentially the female audience," he said. "Women may be more concerned with other aspects, but men have been concerned with the high protein, low fat, macro base. In messaging that, we've been able to win over the male audience. Our consumer right now is still skewed female/male, but it's extremely close, about 55/45.

Mackay continued, "Essentially we're creating a product from a health perspective that males are looking for. If I had a dollar for everyone that said, 'Where do you get your protein from?' The male demographic have been looking for this. Thankfully, male athletes have really come to fruition in the last couple years and looking at Djokovic, looking at the number of other top athletes in the NFL and NBA who have really championed a plant-based lifestyle has definitely caught the consumer's attention as well."

The recent ubiquity of Impossible, Beyond, and other plant-based meat alternatives have lessened some of the stigma around, if nothing else, the occasional dalliance with flexitarianism, but there remains the cliché that more people would opt for meatless meals if only bacon weren't so danged tasty. That's where Sri Artham, founder of Hooray foods, felt he could make his mark. Unlike Mackay, he does eat meat, but after the 2018 fires in San Francisco, Artham decided to focus his attention on fighting global warming. According to the company's director of marketing Stephanie Su, "Sri had experience in consumer packaged goods. He worked at Fair Trade for a long time, and he knew that meat, including pork, was a big contributor to greenhouse gas emissions. So he decided he would try to create his own plant-based meat, specifically plant-based bacon was what he came up with to help battle climate change and take pigs out of the food system and change our consumption habits in an easy way."

Artham found there weren't any great pork analogs on the market. "The most valuable cut of pigs is the pork belly and bacon is something people get really excited about it," he explained. The mission became clear: to make something that not only looked, cooked, smelled, and tasted like bacon in order to lure in those people who had been raised on the pig-based stuff, but also to make it accessible to people who couldn't eat the alternatives on the market for reasons of allergy or aversion to soy, dairy, nuts, and gluten.

The appeal to this audience (still about 60-70% female, but shifting toward parity), Su explained, has not just to do with the similarity to animal-based bacon, but in the way it's presented. "Our packaging looks like real bacon packaging. I know some of the other plant-based bacons have their own distinct packaging but it isn't mimicking how real bacon is packaged. So we have ours on an L-board, 10 strips shingled across just like real bacon. We want to make our products basically feel at home amongst other meat."

Color is also key, Su said. "The branding is orange, which is a little bit more skewing for meat products, more to red than green, which has way more vegan, sustainability-focused associations. And although we care about that, we are trying to get at the flexitarians. We are trying to convince meat eaters to start substituting some of their bacon for plant-based."

And while producers don't really have much of say in where their wares are placed in a supermarket, Su is hoping that as plant-based meat makes more cultural inroads, buoyed as she believes it will be, by partnerships with influencers (the company found particular success in a venture with the very meaty and dude-ly The Feast Kings), Hooray bacon will someday be nestled in next to the porky stuff in grocery's meat cases so customers can elect to make their own decisions. No one's saying you have to go full-on vegan—it's all about freedom of choice, man