'Falcon and the Winter Soldier' Reckons with an American Burden 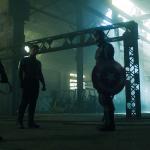 [This story contains spoilers for The Falcon and the Winter Soldier, episode five.]

"You think things are different? You think times are different?" Isaiah Bradley (Carl Lumbly) asks Sam Wilson (Anthony Mackie) when confronted with the possibility that his life as a government experiment, and prisoner, no longer have to remain a painful secret. Sam believes, or at least wants to believe, America has made progress since the days of Isaiah’s captivity. But the truth is that very little has changed between the 1950s and modern-day America, the country has just gotten a little better at hiding its true face with the mask of civility. Deep down Sam knows that, and as a Black man in America, I am reminded of that fact on a weekly basis. Yet, there is security found in the illusion of change: an illusion that has kept the American dream alive, just as it has kept iconic comic book characters, forged in the image of white excellence, alive, and always viable for a return to status quo.

Progress is the great American symptom of mankind’s illness, an illness that enables us to forget history, to believe that past is past. How can we fight with the future when we’ve yet to reckon with the past? That’s a question that has weighed heavily on me this past week. After nearly a year of Black Lives Matter in the spotlight, a year of protests, and politicians calling for changes in policy, we’re still seeing Black and brown people, children, murdered by cops. And there are still far too many people clinging to the idea of "good cops," and to the idea that systemic racism has been improved upon. We had a Black President, right? Yet, a Black President alone, much like a Black Captain America, isn’t a solution. Solutions are confrontational, solutions are painful and solutions prevent a return to status quo. So how does Sam contend with an America that desperately wants status quo, be it Steve Rogers, John Walker, or another blonde-haired and blue-eyed white man?

"Those stars and stripes don’t mean nothin’ good to me," Isaiah says. Bradley’s words are, for so many people, an acknowledgment of something etched into the racial memory of a large population of America. It’s an often unspoken truth that comes with being Black in America. Even as we enjoy our status as Americans, and have love for Americans, there is the incongruous fact that patriotism is a hard pill to swallow whole. It’s not anti-patriotism, rather a patriotic-reluctance. What reason do we have to feel patriotic? After the past four years, patriotism has become ever more difficult to admire as those white stripes let more and more red in. Yet, despite this, Captain America has remained one of my favorite comic characters. Why is that? Why do I feel unease about the American flag yet find myself so drawn to the stories and legacy of Captain America?

It’s that question that is central to Sam’s journey in the penultimate episode of The Falcon and the Winter Soldier, aptly titled "Truth." It’s not enough that Steve Rogers (Chris Evans) handed Sam Wilson the shield at the end of Avengers: Endgame. That isn’t progress in itself. Yet, there is no doubt that a significant audience would have been pleased to see Sam immediately take up the mantle of Captain America and start kicking ass as a Star-Spangled Trouble Man, a box to check in the name of Black superheroism. But The Falcon and the Winter Soldier doesn’t make it that easy for Sam. It asks tough questions of its audiences and forces Sam to ask tough questions of himself. And the series manages to do this without exploiting the concept of a Black man carrying the shield by suggesting that it means the world he inhabits is suddenly all-new and all-different.

"All-New, All-Different," has long been utilized by Marvel Comics as a catchy marketing term to describe relaunched titles with new characters and shifts in status quo. When Sam Wilson took up the mantle of Captain America in the comics in 2015, it was as part of Marvel’s "All-New, All-Different" line. And Sam was billed as the "All-New Captain America". It was a great run, but it didn’t last. In four years, Sam was back to being the Falcon. There’s nothing wrong with being the Falcon, make no mistake. But comics have an issue with shortchanging legacy in favor of familiarity. Questions are asked, issues are tackled to ultimately lead to a shiny new issue one, and the past several years of "all-new, all-different," relegated to a footnote. From Isaiah Bradley to Joaquin Torres, comics have a bad habit of signaling revolution, only to fail committing to them and letting those characters and concepts fall by the wayside.

Comics are subject to the very same erasure of people and history that Isaiah talks about in terms of Black soldiers. While those erasures don’t sit on the scales equally, there is something to the fact that the characters we most often see remain superheroes are tied to the images of the people who most often remain history’s heroes. The Falcon and the Winter Soldier, by virtue of its medium, and the voices behind it, doesn’t have to play by those rules. It can make good on the promise of progressiveness.

Sam Wilson accepting the mantle of Captain America at the end of the fifth episode is radical, because it’s more than a costume change. It is an acknowledgment of the past, and of two men whose government-backed super-soldier experimentation had very different outcomes. "They will never let a Black man be Captain America. And even if they did, no self-respecting Black man would ever wanna be," Isaiah tells Sam. Yet, as Sam says later, "what would be the point of all that pain and sacrifice if I wasn’t willing to stand up and keep fighting." Sam’s acceptance of the role of Captain America mirrors his conversation with Bucky (Sebastian Stan) about not letting others define him. Sam can’t be Captain America for Steve. And he can’t not be Captain America for Isaiah. He must soar on the wings of both men’s histories and chart his own course. If anything, the recognition of history, even the ugly parts, is the most American thing Sam can do in terms of making the tenets the country was founded on a reality instead of a list of platitudes.

Sam Wilson’s arc stands as a thematic foil to John Walker’s (Wyatt Russell). "You built me!" Walker yells at representatives of the U.S. government during his hearing. He only knows how to be what others have told him he is, a solider, the new Captain America. Walker is America, stolen and built on the backs of others’ labor. He can’t be anything different because the values of the country are his values. Despite that, it’s hard not to feel a little sorry for him, in the same way we so often feel sorry for this country that can’t quite get it together. In a counter to Walker, Sam can recognize the deep-rooted evils of America, acknowledge them, and rise above them. For who? Not for the government, and not for a population that wants the comfort of familiarity.

There are two moments in the most recent episode, the first involving Sam’s nephews playing with the shield, and the second depicting Sam’s nephew tracing his finger over the star of his shield. Both of these moments showcase the importance of Black people needing heroes to go along with the knowledge of the evils the country has committed against them.

There has to be something more than Black pain and suffering. This is a factor that we’re still struggling to grapple with in the media. How do we acknowledge the past, of slavery, of lynch mobs, of abusive police systems and still showcase the power and brilliance of Blackness? How do we exist as more than lessons of abuse, broken and discarded pieces of the past like Isaiah Bradley? The Falcon and the Winter Soldier’s depiction of Sam Wilson is at least one answer. To be a Black hero, a truly Black hero and not just a fresh-coat of paint on a white man’s legacy. It is to always be aware of that pain and suffering, and move forward despite that. Things aren’t different. Times aren’t different. But to exist as Black in America, to speak, and fight, and live with a refusal to remain unacknowledged is to shift the status quo. Sam’s journey to becoming Captain America isn’t about asking America for acknowledgment. It’s not about the flag, or even the shield. It’s about standing tall, being seen, and in the words of the great Langston Hughes, declaring, "I, too, am America."