Minari Is Dedicated to Grandmas Everywhere — And Everyone Loves Grandmas 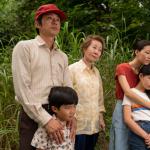 inari is a well-made film — nicely acted, solidly structured, interesting, and a mild emotional workout. It’s about a South Korean family trying to make a go of farming in 1980s Arkansas, and it’s semi-autobiographical, based on the memories of the talented writer-director Lee Isaac Chung.

So far, it’s been universally praised, boasting both sky-high critic and audience ratings and, to some extent, deservedly so. Last week it garnered six Academy Award nominations, including Best Picture and Best Director. After racking up a number of film festival awards, Minari just won the Golden Globe for Best Foreign Language Film, a somewhat odd categorization for a film set and produced in America, partly in English and partly in Korean with English subtitles. In his Golden Globes acceptance speech, director Chung said his movie was about “a family trying to learn to speak a language of its own. It goes deeper than any American language and any foreign language.”

This universalizing summary of the film — that in its simple profundity, it transcends the potentially divisive specifics of language and culture — is very much in keeping with the hymns of critical praise it’s received. As NPR’s Bob Mondello puts it, “The filmmaker named his movie ‘Minari’ after a Korean herb grandma brought with her that is resilient and grows wherever it’s planted — a nice metaphor for immigrant families.” Stephanie Zacharek of Time magazine concurs, calling Minari “a gentle, lovely picture, one that acknowledges there really is no ‘immigrant experience,’ beyond the pure human experience of finding yourself adjusting to a new environment. . . . If its setting is specific, its vibe is universal.”

If I’d read any of that commentary before seeing Minari, I’d probably have begged off reviewing it or even watching it. The last thing I’m interested in seeing right now is a gentle, lovely, universal story about a generically resilient family pursuing the American dream. Not in the mood, and never will be in the mood again. But if you wanted to persuade me to see one insightful person’s savagely angry, highly particular dark comedy about the grim travesty of pursuing the American dream in the current hell-state we’re in, well — now you’re talking my language. (Remember Sorry to Bother You? It came out in 2018, but it seems like a long time ago, doesn’t it? Where are you, Boots Riley, and what’s become of your second film?)

For me, Minari’s entire appeal is all in the specifics — South Korean family plus Arkansas farm plus 1980s. And fortunately, there are some lively aspects of that scenario that kept me going through all the gentle, lovely, universal parts. There’s the rural factory farming job of “chicken sexing,” for example, that unhappily married couple Jacob (Steven Yuen) and Monica Yi (Yeri Han) are doing to keep the family going financially till their crops come in. Jacob excels at rapidly identifying and separating male and female chicks but is desperate to leave the appalling job behind for a self-sufficient life as a farmer. Monica, who resents Jacob’s precarious “hillbilly farming” experiment, used to be too slow for their old chicken sexing jobs in California and practices to bring up her speed because she expects to return there once the farm, and her husband, fail in Arkansas.

There’s also the compelling angle on the dominance of devout religion in both the white Arkansas community and the South Korean immigrant community — Pentecostal Christianity, a major force in both. I’d hoped for some sharp political details about the 1980s, but other than a single mention of Reagan being “a friend to the farmer,” which helps secure Jacob a bank loan, not much was made of it. The financial anxiety that hangs over the Yi family as well as the shabby-looking, ultrareligious local named Paul (Will Patton), whom Jacob takes on as a hired farmhand, has to stand in for what’s going on in the country as a whole.

So what’s not to like in all this? Well, this is a very “classic” family drama. It has a recognizable tendency to flag early and often a number of narrative developments as possible tragedies in the making. So you’re all keyed up throughout, waiting for the inevitable calamity to occur, though there will always be a bit of humor peppered throughout, usually provided by the child characters. Then, post-calamity, amid the wreckage, the universal lesson-learning and affirmation of supposedly transcendent values takes place. Family is all that matters, love will keep us together, home is where the heart is — you know the drill.

A lot of people adore this type of material, and certainly, great art can be made from it. Yasujirō Ozu’s domestic dramas spring to mind. But no character in a typical family drama is ever going to say a conclusive line as annihilating as the one in Ozu’s Tokyo Story: “Life is very disappointing, isn’t it?”

Here are the potential calamities in Minari: Is Jacob going to fail at farming, which represents his last-ditch hope of escaping the brutal factory farming job of “chicken sexing”? Will the well run dry and the crops fail? Will anyone buy the Korean vegetables he’s growing? Perhaps racism will make the family’s lives in Arkansas unlivable? Or they’ll just run out of money and grind to a halt there in the remote countryside and have to abandon everything to survive? Some combination of these disasters?

Is Monica, who hates the farm and the trailer housing from the first moment she arrives, going to turn her stern resentment into angry action, leaving her husband, taking the kids Anne (Noel Cho) and David (Alan S. Kim), and heading back to California? Is David, the alter ego of writer-director Lee Isaac Chung, going to end up physically or psychologically impaired by his heart murmur and his parents’ repeated overprotective shouts of “Don’t run”?

What’s going to happen to the eccentric, high-spirited grandmother Soon-ja (Youn Yuh-jung) who comes to visit and is the only one in the family who’s a consistent good time? She loves TV wrestling, card playing, swearing, and the hijinks of her grandchildren, but she’s hated by David who says she “smells like Korea.” You don’t even have to wonder, you just know Grandma’s either going to die or be stricken down by a serious illness that destroys all her larkiness, so the boy can learn belatedly to appreciate her.

And all this sprinkled with plenty of heavy symbolism. Personally, I don’t want any more symbolism. Let’s just agree to stop doing it forever, consign it to previous eras, start fresh, do something else. What was good for cutting-edge theater in the 1950s might no longer be ideal for our time.

There are the male chicks getting incinerated because they don’t taste good or grow up to lay eggs, and are judged monetarily “useless.” The downtrodden Jacob turns them into a sad lesson for his son about the fate of men who can’t succeed financially, when David asks about the smoke coming up from the incinerator and is told, “You and I should try to be useful.”

There’s the symbolic lesson of the snake in the forest, which the grandmother tells David is not dangerous when it’s out in the open. It’s the hidden snake that ought to be feared. So then you know to ponder the “hidden snakes,” aka unrecognized or unacknowledged threats to the family that are to be feared far more than the manifest “snakes.”

And don’t even get me started on lonely, warmhearted Paul and his habit of spending every Sunday lugging a life-size wooden cross down a rural road, which is regarded as alarming or ridiculous by fellow Christian fundamentalists.

But the ultimate symbol is, of course, the Korean minari plant grown by the grandmother down by the creek, as she scorns the “stupid Americans” who don’t know about its life-giving properties. Her efforts are ignored by the family, as they’re focused on the far more uncertain thriving of the father’s cash crops, even though minari is “wonderful, wonderful, wonderful” — it’s food, it’s medicine, it fosters all human flourishing, and it has the potential to thrive anywhere, just like the grandmother herself. Or as the director indicates, just like love itself.

Did I mention the film is dedicated to “grandmas everywhere”? It was after that final sentiment that I knew that Lee Isaac Chung is well on his way to becoming a hugely successful director in America. Even after everything that’s happened in the past decade, we can’t help but love that stuff.

OUR NEW ISSUE, “THE RULING CLASS” IS OUT ON TUESDAY. GET A $20 DISCOUNTED PRINT SUBSCRIPTION TODAY!