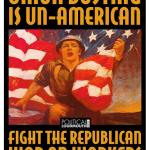 Today, President Biden will sign an Executive Order establishing the White House Task Force on Worker Organizing and Empowerment. The Task Force will be dedicated to mobilizing the federal government’s policies, programs, and practices to empower workers to organize and successfully bargain with their employers. Chaired by Vice-President Kamala Harris and Vice-Chaired by Secretary Marty Walsh, the Task Force will include more than twenty cabinet members and heads of other federal agencies who will take a whole-of-government approach to empower workers.

President Biden and Vice-President Harris have long championed workers’ rights. As the President has said: America was built by the middle class, and unions built the middle class. Throughout our country’s history, unions have been the driving forces for advancements in workers’ rights and improved living standards for union and non-union workers. They have fought for higher wages, greater job security, safety and health laws, essential benefits like health insurance and retirement plans, and protections from discrimination and sexual harassment for millions of workers across the country. Sixteen million workers in the United States are union members or in a job that provides them union representation. More than six in ten of those workers are women and/or people of color. Union workers earn roughly 13% more than non-union workers on a similar job site. They also experience drastically lower rates of labor standards violations, like employers wage theft or workplace safety and health hazards.

Despite the importance of unions to our economy and democracy, and nearly 60 million workers today saying they would join a union if given the chance, American workers have faced increasing barriers to organizing and bargaining collectively with their employers. Economic change in the United States and globally, technological developments, and the failure to modernize federal organizing and labor-management relations laws so they respond appropriately to the reality found in American workplaces have made worker organizing exceedingly difficult. The result has been a steady decline in union membership in the United States over past decades. In 2020, union members made up just 10.8% of the U.S. workforce, down from more than 30% in the 1950s.

The President and Vice President believe that the decline of union membership is contributing to serious societal and economic problems in our country. Widespread and deep economic inequality, stagnant real wages, and the shrinking of America’s middle class are all associated with the declining percentage of workers represented by unions. In addition, lower union membership rates have exacerbated the pay gap for women and workers of color. The decline of union density has also weakened our democracy. Unions ensure workers’ voices are heard in their workplaces, communities, and government.

The Administration has already taken a number of steps to empower workers to organize. It has endorsed the Protecting the Rights to Organize (PRO) Act and other labor law reform bills, issued Executive Orders restoring collective bargaining in the federal sector, and rescued the hard-earned pensions for millions of Americans through the American Rescue Plan. There is still much more the federal government can do to empower workers. The Task Force is the next step in these efforts.

Putting the Policy of the U.S. Government into Action: Task Force on Worker Organizing and Empowerment

Since 1935, when the National Labor Relations Act was enacted, the policy of the federal government has been to encourage worker organizing and collective bargaining, not to merely allow or tolerate them. In the 86 years since the Act was passed, the federal government has never fully implemented this policy. While some administrations have taken selected actions to strengthen workers’ rights, no previous administration has taken a comprehensive approach to determining how the executive branch can advance worker organizing and collective bargaining.

That is why, today, the President is establishing the White House Task Force on Worker Organizing and Empowerment (“Task Force”). The mission of the Task Force will be to mobilize the federal government’s policies, programs, and practices to empower workers to organize and successfully bargain with their employers. This mission includes looking for ways to increase worker power in areas of the country with restrictive labor laws, for marginalized workers including women and people of color, and for workers in industries that are difficult to organize and lack labor protections.

The President’s Executive Order directs the Task Force to make a set of recommendations within 180 days addressing two key issues. First, how can existing policies, programs, and practices be used to promote worker organizing and collective bargaining in the federal government? And second, where are new policies needed to achieve the Task Force’s mission and what are the associated regulatory and statutory changes needed?