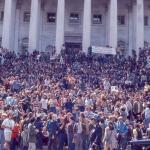 Fifty years ago this month, I watched 1,200 of my fellow antiwar demonstrators get carted off to jail for simply sitting on the back steps of the Capitol and listening to speeches from two House members.

That bust was the last gasp of three days of mass protest activity in Washington, DC, against the Vietnam War. Kicking off on May 1, the May Day actions resulted in the largest number of civil disobedience–related detentions in US history — 12,000 in all, including a record-breaking single-day total of 7,000 on May 3, 1971.

Organizers of the May 1971 antiwar actions had publicly announced their intention to shut down the nation’s capital by blocking its streets, bridges, and buildings. But that plan was thwarted by nearly twenty thousand local, state, and federal police officers, National Guard members, US Marines, paratroopers from the army’s 82nd Airborne Division, and the 6th Armored Cavalry Regiment from Fort Meade in Maryland.

The crackdown had lasting effects. As L. A. Kauffman argues in her 2017 book, Direct Action, Mayday “influenced grassroots activism for decades to come, laying the groundwork for a new kind of radicalism: decentralized, ideologically diverse, and propelled by direct action.” Lawrence Roberts, who became an award-winning journalist after being detained himself, notes another impact. The Nixon administration’s response, he writes in Mayday 1971, led to “consequential changes to American law and politics, including the rules governing protests in the nation’s capital, which remain in force today.”

Mayday was the grand finale of antiwar actions that included the bombing of a Capitol building restroom by the Weather Underground, an occupation of the National Mall by Vietnam Veterans Against the War, and a mass rally organized by the National Peace Action Coalition (NPAC) that drew five hundred thousand people.

This last event was similar to the huge peace demonstrations held in Washington, DC, on weekends during the spring of 1970 and the fall of 1969. Each involved bussing in large crowds of people, doing a little marching around, listening to speeches and music, and then getting back on the busses to go home. For some in the antiwar movement, this familiar routine — what one critic called “dull ceremonies of dissent” — began to feel futile and too easily ignored by the Nixon administration.The late Rennie Davis, the mastermind and maestro of May Day, had a different idea. Tens of thousands of activists would come to Washington ready to camp out and disrupt business as usual — on a weekday, when thousands of federal workers were trying to get to their jobs.

As viewers of Aaron Sorkin’s flawed film about the Chicago Seven will know, Davis was no stranger to confrontational protest. A leader of Students for a Democratic Society (SDS) at Oberlin College, he helped organize antiwar demonstrations at the Democratic National Convention in Chicago in 1968. He was arrested and put on trial as a defendant in the most famous political trial of the era, resulting in a 1970 conviction for incitement to riot (it was later overturned on appeal).

Davis was still facing a five-year jail term for his Chicago Seven role when he hit the road to convince campus activists that if “the government won’t stop the war, the people will stop the government.” As one old SDS comrade told the New York Times when Davis died in February at age eighty, Rennie’s style of organizing involved a lot of “smoke and mirrors.” He believed in “political salesmanship, creating a kind of myth that wasn’t quite a lie but created an image of possibility, even if it wasn’t yet true.”

The game plan that Davis developed wasn’t an easy sell among traditional practitioners of civil disobedience or NPAC. Pacifist foes of the Vietnam war tended to play by strict nonviolent protest rules: if you broke the law by blocking a federal building or burning draft board records, you didn’t try to evade arrest afterwards. You sat (or laid down) and waited to be handcuffed and hauled away.

NPAC leaders, following the Socialist Workers Party line, didn’t favor getting busted at all. They believed that the broadest possible antiwar movement could only be built through continued reliance on massive protests that remained peaceful and legal. “When people state they are purposely and illegally attempting to disrupt the government . . . they isolate themselves from the masses of American people,” argued the Militant, a Socialist Workers Party publication.

Ignoring such counsel, Davis and fellow members of the May Day Collective envisioned widespread, mobile civil disobedience. Protesters would come to Washington as part of small homegrown “affinity groups” ready to disrupt and run, not damaging property or harming people but definitely trying to paralyze commuter traffic entering the District of Columbia on Monday, May 3, 1971.

The staging area for this affront to public order was originally going to be Rock Creek Park in northwest DC. But after negotiations with city officials, our official camping site became West Potomac Park, near the Lincoln Memorial. On May Day itself, Saturday, May 1, fifty thousand people gathered there to hear a rock concert and last-minute pep talks. (Among the bands playing that night were the Beach Boys, who insisted on being the opening act so, as cofounder Mike Love explained, they could leave “before any riots broke out.”) Before we emerged groggy from our tents the next morning, several thousand DC police officers had surrounded the encampment and ordered us to disperse. Rep. Bella Abzug (“Battling Bella”) addresses a crowd on the back steps of the Capitol on Day 3 — before everyone got arrested.

To avoid any premature confrontation, almost the entire crowd packed up and left — seeking shelter in college dormitories, church basements, private homes, or apartments throughout the city. By Monday, May 3, our numbers were greatly reduced, though by most estimates still more than twenty-five thousand strong.

That morning, few demonstrators had found their way to the locations they’d been assigned in the “tactical manual” developed for the protest. But it didn’t matter: President Richard Nixon had stubbornly refused to give all federal employees the day off. As protesters roamed downtown DC, dodging huge tear-gas barrages, they created small barricades, left disabled cars in roadways, or temporarily blocked intersections with mobile sit-ins.

The tactical advantage underpinning Mayday was now apparent, the asymmetrical warfare of a guerilla force against a standing army. It was nearly impossible to defend against small decentralized bands who could shift on a dime, tie up police or troops at one spot, and then get to another place before the authorities could adjust.

One adjustment the authorities did make created a legal nightmare for themselves. DC police chief Jerry Wilson suspended the use of field-arrest forms and accompanying Polaroid picture-taking that linked particular officers to individual arrestees. On May 3, nearly seven thousand people were detained — but with almost no information about who they were, what they had done, or who had arrested them.

The city also quickly ran out of places to hold everyone. During my own forty-eight hours of detention, I never saw the inside of a jail cell. Along with fellow detainees from Vermont, I was first transported, via patrol wagon, to the exercise yard of the DC city jail. Then several thousand of us were ferried to the old DC Coliseum, an indoor sports arena, where members of the National Guard, bored but friendly, kept watch.

Conditions were not great, but a lot better than what the protesters who were penned up overnight in an outdoor practice field next to RFK Stadium experienced. There, sympathetic black residents showed up with much-needed donations of food, water, and blankets, which they passed over the chain-link fence to detainees who were almost entirely white. One organizer of that relief caravan, civil rights activist Mary Treadwell, informed the press that she was there because anything that “can upset the oppressive machinery of government will help black people.”

Even critics of our attempted disruption — and there were many in politics and the press — soon expressed concern about the circumstances of our confinement and the militarization of the city. The authorities’ use of mass preventive detention — which led to some non-protesters (including reporters) being swept off the street as well — paralyzed the local jail and court system.

Creating that kind of crisis was very much in the tradition of free speech fights waged by the Industrial Workers of the World a half century earlier and the civil rights protests that had filled southern jails the previous decade. In both situations, orchestrated mass arrests were deployed as a pressure tactic against local authorities that were disregarding civil liberties and civil rights. 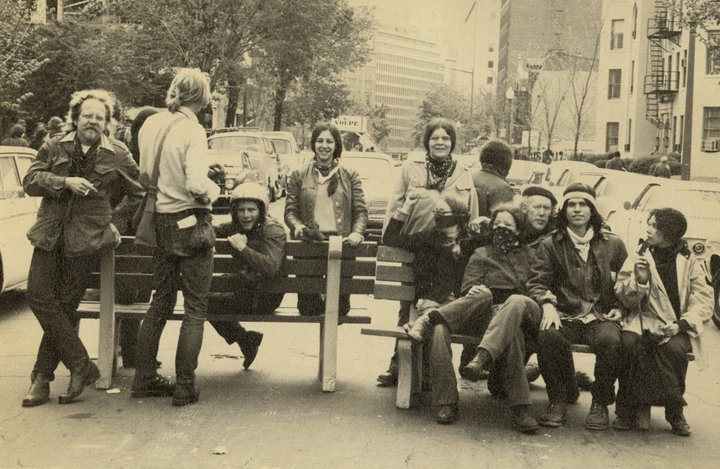 As word spread that our legal defense team was trying to persuade a federal judge to order an unconditional release, many detainees in the Coliseum spurned tempting offers to be finger-printed and released on $10 bond. In the meantime, five thousand fellow protestors, who had eluded the first day’s roundup, descended on the Justice Department and Capitol on May 4 and 5, respectively. They sat down and got arrested in more traditional fashion. Among those hauled away was John Froines, one of two Chicago Seven defendants acquitted in that case, but now, along with Davis and Abbie Hoffman, indicted for conspiracy again, this time as a planner of May Day.

In Mayday 1971, Roberts provides a detailed account of the subsequent litigation, which dragged on for sixteen years. Only a handful of people were ever convicted of anything. The charges against everyone else were dropped, including the federal indictments of Davis, Froines, and Hoffman for conspiracy.

“Over the years,” Roberts writes, “thanks to class action cases filed by the ACLU, as well as individual lawsuits, judges and juries awarded millions of dollars to thousands of detainees, for violations of their right to free speech, assembly, and due process. . . . Congress acknowledged, in a backhand way, that the fault lay as much with the federal government as the police; it appropriated more than $3 million for the city to help defray the costs of settlements and damages.” In one jury trial, the plaintiffs initially won $12 million in damages, an amount later reduced on appeal.

As Roberts notes, key players in the suppression of May Day ended up spending more time in jail, for more serious offenses, than anybody who blocked traffic to end the war in Vietnam. That’s because thirteen months later, Nixon administration operatives were caught burglarizing and bugging the Democratic National Committee. The resulting Watergate scandal ended with Nixon facing impeachment and ultimately resigning in 1974. Among his various coconspirators were architects of the May Day crackdown like White House counsel John Dean, Nixon chief of staff H. R. Haldeman, top domestic policy advisor John Ehrlichman, attorney general John Mitchell, assistant attorney general Richard Kleindienst, and White House staffer Egil Krogh, who was a key source for Roberts’s book.

A future Supreme Court chief justice, William Rehnquist provided a Justice Department memo assuring Nixon that he had “inherent constitutional authority to use federal troops to ensure that Mayday demonstrations do not prevent federal employees from . . . carrying out their assigned government functions.”

During last year’s Black Lives Matter protests around the country, this Nixon-era roundup was replicated on a much broader scale. An estimated fifteen to twenty-six million participated in local marches and demonstrations, and a larger number than during Mayday 1971 were likely arrested nationwide. And in another echo of 1971, the vast majority of cases against those detained have been dismissed — either because protesters were clearly exercising their First Amendment rights or to avoid further jamming a US court system already suffering from pandemic-created backlogs.

As the New York Times has noted, with considerable understatement, most charges have also been dropped because, now as in the past, police officers use “mass arrests as a technique to help clear the streets, not to confront illegal behavior.”

Steve Early was a longtime Boston-based national union representative for the Communications Workers of America. He has written four books about labor and politics, including Save Our Unions, and he just coauthored a new book dealing with veterans’ issues.