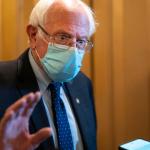 Sen. Bernie Sanders made clear in an interview Sunday that he opposes the push by top Democrats to restore a tax deduction that overwhelmingly benefited the richest households in the U.S., saying such an effort "sends a terrible, terrible message" at a time of crippling economic pain for poor and working-class people.

"You have got to make it clear which side you are on—and you can't be on the side of the wealthy and powerful if you're going to really fight for working families," Sanders (I-Vt.), the chair of the Senate Budget Committee, said in an appearance on "Axios on HBO."

The tax break in question is known as the state and local tax (SALT) deduction, which former President Donald Trump and Republican lawmakers capped at $10,000 as part of their 2017 tax law. While the GOP tax measure was highly regressive—delivering the bulk of its benefits to the rich and large corporations—the SALT cap was "one of the few aspects of the Trump bill that actually promoted tax progressivity," as the Washington Post pointed out last month.

Nonetheless, prominent Democrats from blue states—which were disproportionately impacted by the SALT cap—are demanding full restoration of the tax break in President Joe Biden's infrastructure package, disingenuously characterizing the cap as a major burden on the middle class.

While Biden did not include the SALT cap repeal in his opening offer unveiled in March, Democrats such as House Speaker Nancy Pelosi (D-Calif.), Senate Majority Leader Chuck Schumer (D-N.Y.), and Tom Suozzi (D-N.Y.) are calling for a revival of the deduction.

As Common Dreams reported last month, Suozzi is part of a potentially influential faction of House Democrats that is threatening to oppose Biden's infrastructure package if the SALT cap repeal is not included.

Though much of the New York congressional delegation has come out in favor of repeal—including progressive Reps. Jamaal Bowman (D-N.Y.) and Mondaire Jones (D-N.Y.)—Rep. Alexandria Ocasio-Cortez (D-N.Y.) said last month that she doesn't "think that we should be holding the infrastructure package hostage for a 100% full repeal on SALT, especially in the case of a full repeal."

"Personally," Ocasio-Cortez added, "I can't stress how much that I believe that is a giveaway to the rich."