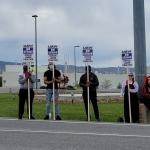 Factory workers at a Volvo truck plant in southwest Virginia voted by 91 percent Sunday not to ratify a concession-filled contract negotiated by local and International Auto Workers (UAW) officials.

“They made a billion dollar profit off our labor and we got nothing,” said Rhonda Sisk, a three-year assembler in the chassis department.

The 2,900 members of UAW Local 2069 had voted by 98 percent to authorize a strike; they hit the bricks April 17. Though union officials were close-mouthed about bargaining goals, rank and filers wanted to get rid of the two-tier wage system they had worked under for years.

The strike was solid, shutting down the largest Volvo truck manufacturing facility in the world. But 13 days later many workers were dismayed when their union sent them back to work and said they would be told later what had been bargained.

It wasn't easy finding out the tentative agreement's contents. A “highlights” pamphlet was distributed, but unlike the UAW's practice at the Big 3 automakers, the entire proposed agreement was not put online. Workers could get a copy at the union hall, and soon the thick document was brought into the plant and copied.

One of the biggest insults, according to Sisk, was raising the cost of health care. Out-of-pocket costs would rise by the end of the contract to $2,000 a year, with a $4,000 deductible.

Under the current contract, workers are divided into “core”—those with more than 15 years' seniority—and “competitive.” New hires start at $16.77 and get a dollar more each year for five years, up to a max of $21.77—far less than the core top pay of $30.02. Under the rejected agreement, though there are raises, “tiers are there to stay,” Sisk said. New hires in one assembler classification, for example, would get to $27 by 2026.

Language would have allowed union officials to agree to an unspecified Alternative Work Schedule such as “four 10-hour days, alternate shift operations, or other alternate schedules based on the needs of the business.” Time-and-a-half pay over eight hours in a day would be gone. These alternative schedules are popular with management at the Big 3 automakers—and very unpopular with many auto workers.

Another clause would make workers take 40 hours of vacation in order to use FMLA.

A “competitive” worker who asked that his name not be used said he wants a contract like the UAW's pact at Mack Trucks (also owned by Volvo) in Pennsylvania, Florida, and Maryland, which “is like 40 times better.” That contract was won after a strike in fall 2019. He wants to see all workers reach top pay after three years of work. (In the 1970s, before the era of concessions began, new hires reached top pay after 90 days.)

A private Facebook group with 1,900 members was part of angry members' organizing but, Sisk said, “most of it was just sitting and talking with people who had been there longer than we had.” There were no leaflets; members were forbidden to campaign during the vote at the union hall (where there was a police presence all day), nor were they allowed to observe the vote count.

Getting a Fair Contract Vote

“The right to vote on contracts is most often undermined when members can’t make an informed decision,” write Mike Parker and Martha Gruelle in the Labor Notes book Democracy Is Power. “They need accurate contract language, the opportunity for alternative leaders to analyze the proposal, time to discuss the likely implications, and time to perhaps campaign among co-workers for a ‘no’ vote. In most unions all are short-circuited.

“In many cases [like at Volvo] members never get to see the full contract, only a summary version, usually with the most positive spin and even dubbed ‘Highlights.’ Are there really never any ‘lowlights’ that the members should know about?”

For more see the article “Getting a Fair Contract Vote.”

International officials tried to sell the contract. “We thought Ray Curry would be there, who negotiated our contract,” Sisk said, “but he did not show up.” Curry is the UAW Secretary-Treasurer and head of the Heavy Truck Department; insiders say he will head the union's “Administration Caucus” ticket when officers are elected next year.

At a contract information meeting, Dave Snyder of the International’s Heavy Truck Department became so exasperated with Sisk's questions that he told her, “If you don't like the agreement, you can go work somewhere else.”

The “competitive” worker said local officials did not campaign for the contract. “It feels like it’s more the International than anything,” he said. “They're playing more of a role than they should. The union is saying we gotta answer to the International, and whatever the International wants to do, they’ll do it. And we had no say or fight in that.”

To try to ensure a fair vote, workers encouraged each other to bring a black pen to mark their ballots. (When they had elected the bargaining team, officials told them to use pencil, and many workers think that election was fraudulent.) They took pictures of their No ballots alongside their company badges; Sisk—who had predicted the 90 percent “no” vote well before it happened—said that hundreds of such pictures were posted to Facebook.

Today was workers' first day back in the plant after the vote. Union officials circulated a survey asking members' top five issues to fix in the contract. “Everybody's saying, 'It's more than five!'” Sisk said. “They're filling up the page front and back.”

“You can take that piece of trash back to the table and let them know we are not weak pushovers and if they want to continue using the best truck builders in the world as they call us then they can give us a fair contract!!” said one worker on the local’s Facebook page.

Some workers now want to petition to recall the bargaining team.

Dan DiMaggio contributed to this article.

Jane Slaughter is a former editor of Labor Notes and co-author of Secrets of a Successful Organizer.