Black Lives Matter, Palestinian Resistance, and the Ties That Bind 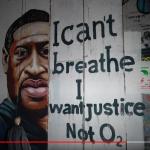 At the beginning of Ramadan, police and special forces barely distinguishable from fully kitted-out soldiers descended on young Palestinians who, intending to meet up at the Damascus Gate in Jerusalem’s Old City, found the plaza blocked off. They also attacked those at prayer in the al-Aqsa mosque. These events and others, along with Israeli settlers’ wanton expulsions of Palestinian families from the East Jerusalem neighborhood of Sheikh Jarrah, led to the current clashes in Israel and Palestine—this round apparently now coming to a halt with a cease-fire. They also led to an unprecedented general strike by Palestinians in Israel and the occupied territories.

The rubber bullets and tear gas shot into crowds, the pummeling of heads into cement and asphalt, the arrests, and the expulsions magnify the cruelty—and that’s the point. But they also brought the dehumanization and the daily roster of injustices faced by Palestinians into sharp relief—just as George Floyd’s murder last year did for anyone who had wanted to absolve America of racial terrorism.

If the lynchings of Trayvon Martin and Michael Brown birthed the Black Lives Matter movement, the nine minutes and 29 seconds that George Floyd spent dying brought the movement to maturity. The displays of African American resilience against militarized police forces last summer transcended borders and helped galvanize Palestinian youth in Israel and the occupied territories.

Like African American youth, Palestinians as young as 15 and 16 are in the vanguard of protest and face the threat of imprisonment or worse—hundreds have been arrested. Palestinians know in their bones what state violence, militarized policing, and occupation of communities look like. Palestinian Americans living in Ferguson and greater St. Louis recognized the ritualized terror inflicted on Michael Brown and the people of Ferguson by local police (which had coincided with an fresh outbreak of fighting between Israelis and Palestinians).

Last week, Rep. Cori Bush (D-MO) remembered the late Bassem Masri, a Palestinian American activist, in remarks in the House Chamber. “He bore witness to the Ferguson atrocities. He showed up ready,” Bush, a veteran Black Lives Matter activist, said. She described sitting on the grass with Palestinian American activists near the place where Michael Brown had died. “I remember them describing to us what to do when [the police] shot us with rubber bullets and tear gas,” she said. Black Lives Matter activists and others had later traveled to the occupied territories to meet with the activists there and see for themselves such facts of life as militarized policing, checkpoints, and separation walls.

The documenting of the latest Palestinian uprising through video, photography, memes, political cartoons, poetry, and prose, much of it from ordinary people, recalls the creative outburst that made Black Lives Matter accessible to millions, especially the white Americans who stopped spectating and got up to march.

After spending days watching the American protests last year, one Palestinian artist spent two hours painting George Floyd’s face on the wall that separates the occupied West Bank from Israel. “George Floyd was killed because they practically strangled him, and cut off his breathing,” Taqi Spateen told Mondoweiss, an independent Israel-Palestine news site, “and every day, this wall strangles us and makes it hard for us to breathe.” Indeed, #ICantBreathe has become a regular element in social media posts by Palestinians and their supporters during the current crisis.

Other social justice strategies and tactics may yet find their way to the region. Fayrouz Sharqawi of Grassroots al-Quds/Grassroots Jerusalem, a Palestinian advocacy group, noted that Palestinians needed to establish networks of lawyers to aid people under arrest; nurses and doctors to help coordinate care after attacks during periods when the Israeli army bars ambulances from affected areas; and protection committees to ward off lynch mobs.

“We need to build those bridges that Israel has burned down between the different parts of our occupied homeland,” she said during a Dream Defenders/US Campaign for Palestinian rights online forum called “What Does Palestine Mean for Black America?”

Black Lives Matter has filled the vacuum left by the fading civil rights generation, taking on issues like policing, mass incarceration, and solidarity with Palestinians, as activists operate in decentralized groups on the ground in their own communities, a distinct reversal from the civil rights era. Although moderate leaders long had Israel-Palestine in their sights, they faced accusations of anti-Semitism if they offered a smidgen of support for Palestinians, as Martin Luther King Jr. did near the end of his life. While still reeling from the fallout from his opposition to the Vietnam War, King gave a frank appraisal of Middle East tensions in a September 1967 letter to the American Jewish Committee:

Israel’s right to exist as a state in security is incontestable. At the same time the great powers have the obligation to recognize that the Arab world is in a state of imposed poverty and backwardness that must threaten peace and harmony. Until a concerted and democratic program of assistance is affected, tensions cannot be relieved. Neither Israel nor its neighbors can live in peace without an underlying basis of economic and social development. (emphasis in the original)

Several years earlier, Malcolm X, then an apostle of Muslim solidarity, had taken a much more provocative stance. In 1964, he asked, “Did the Zionists have the legal or moral right to invade Arab Palestine, uproot its Arab citizens from their homes and seize all Arab property for themselves just based on the “religious” claim that their forefathers lived there thousands of years ago?” Anathema in his times, his views nonetheless influenced other groups like the Student Nonviolent Coordinating Committee and, later, the Black Panthers.

Today, progressive House Democrats Cori Bush, Ayanna Pressley, Rashida Tlaib, Alexandria Ocasio-Cortez, Ilhan Omar, Jamaal Bowman, and André Carson have moved into the halls of power voicing support for Palestine. (A similar passing of the torch has yet to come in the occupied territories, but the May uprising may presage the emergence of new, younger Palestinian leaders to replace increasingly irrelevant and ineffectual actors like Mahmoud Abbas, the 85-year-old Palestinian Authority president.)

Given African Americans’ concerns with their own civil rights and economic struggles, fostering broader awareness is a daunting task. Angela Davis, the civil rights activist and University of Southern California, Santa Cruz, professor, noted in a 2013 speech that “in the United States when we have described the segregation in occupied Palestine that so clearly mirrors the historical apartheid of racism in the southern United States of America—and especially before Black audiences—the response often is: ‘Why hasn’t anyone told us about this before? Why hasn’t anyone told us about the segregated highways leading from one settlement to another, about pedestrian segregation regulated by signs in Hebron—not entirely dissimilar from the signs associated with the Jim Crow South.’”

Perhaps the most powerful imprimatur of the Black Lives Matter movement is its recognition of the need for shifting the narrative and the language around police brutality and mass incarceration. The language has focused on abolition: closing prisons (“tear down these walls”) and eliminating police forces (“defund the police”).

Much like African Americans in the U.S., Palestinians in Israel and the occupied territories view the Israeli state with deep distrust after decades of war and fruitless “peace” accords. “Palestinian youth in this moment are increasingly fed up with these promises of a two-state solution,” Ahmad Abuznaid, the executive director of the US Campaign for Palestinian Rights, told the Prospect. “These are things that we’ve been lied to about that have been really peddled to us to keep us calm and quiet. [But now] they’re saying that nothing short of the end of the settler colonial project [is] the only way we’re going to gain our freedom.”

The challenges ahead are daunting: How will Palestinians respond to the inevitable and powerful backlash from a right-wing Israeli government that is rarely moved by international public opinion and continues to receive billions in support from the U.S. despite decades of Palestinian subjugation? Black Lives Matter faces a similar challenge as it nurtures African American/Palestinian ties amid more police shootings, wars of words over policing, voter suppression threats, and the inability of much of America to face up to white supremacist insurgencies on its own shores.

Read the original article at Prospect.org. Used with the permission. © The American Prospect, Prospect.org, 2021. All rights reserved. Click here to support the Prospect's brand of independent impact journalism.