Not All Labor Law Reforms Are Created Equal 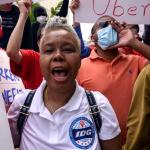 New York and California are the two largest blue states in the country, both with labor movements of creativity and power. Since congressional passage of the Protecting the Right to Organize (PRO) Act remains a long shot, much pro-labor legislative action still remains with the nation’s handful of progressive states, where the template for a new union movement — and the state laws sustaining it — is being forged.

So it’s important that in New York and California, some unions are pursuing two different legislative initiatives seeking to leverage the support they enjoy among elected officials in each state. At first glance both look good. But look closer and you see that one is an utter disaster, the other a social innovation with much progressive promise.

A Labor Law Reform Only Gig Companies Could Love

In New York, legislation that purports to create collective bargaining rights for gig-economy workers is being introduced in the State Senate, pushed by the International Association of Machinists and Aerospace Workers, and the Transport Workers Union, with support from the New York AFL-CIO.

If passed, the proposal would swell union ranks and generate a huge dues flow — but it would also be a signal victory for Uber, Lyft, DoorDash, Grubhub, and all app-based corporations who want to employ hundreds of thousands of workers as independent contractors without giving those workers the same access to social security and unemployment insurance, or the same minimum wage and worker compensation protections as regular employees.

The perverse appeal of this legislation is twofold. It would allow app-based workers to vote to form unions, which would then engage in “sectoral bargaining,” a form of state-supported negotiations that began in the Progressive Era and is today enjoying a revival in some labor circles.

Almost ninety years ago, the Wagner Act established collective bargaining as the mechanism whereby organized labor and their employers would set wages, benefits, and other conditions of employment. But that model, designed to engender an industrial democracy in the workplace, is hopelessly broken. We saw that at Bessemer, Alabama earlier this year, where Amazon’s arsenal of anti-labor weapons, legal as well as economic, overwhelmed the organizing impulse of a dedicated group of militant workers and a feisty union.

Labor partisans have therefore turned to a Progressive Era idea which was designed to raise wages and regulate the hours of work not just for one unionized enterprise, but in an entire occupational or industrial sector, such as apparel, retail sales, food service, and other services.

In the Progressive Era, women and children, many immigrants, labored in those sectors of the economy. Today, an equally impoverished and vulnerable class of workers, mostly people of color and many who are undocumented, work in twenty-first-century versions of these enterprises.

Just as civil rights laws apply to all US workplaces regardless of the attitude of workers or employers, so too would a governmental wage board (sometimes called an “industry commission”): decide on a set of minimal work standards that are equally universal within the industries and regions over which the board has jurisdiction.

Under the legislation proposed in New York, app-based workers would be encouraged to vote to form a sector-wide union — encompassing, for example, all drivers at Lyft and Uber or all the delivery people who bring food and groceries to a front door.

In contrast to the Wagner-era labor law that has been so distorted by decades of adverse administration and judicial rulings, unionization would be easy: just 10 percent of all workers in each industry sector would have to sign a card to create a union. That union would then engage in sectoral bargaining with companies to hammer out standards governing the entire industry.

Because antitrust law restricts direct collective bargaining by the “independent contractors” who drive for Uber or deliver for DoorDash, the new rules would take the form of recommendations to a state commission, which could then approve and impose them on the entire industry sector. This is not unlike the Progressive Era sectoral bargaining efforts that established wage commissions in a dozen or more Northern and Western states.

The appeal of such policy to an embattled union movement is twofold. The participating unions would quickly enroll tens of thousands of new workers and secure an enormous new revenue stream. It is unlikely that such a union would mean much to most workers, especially part-timers. But under the draft legislation in New York, real money is at stake. A ten-cent surcharge on every ride or delivery would go into the union treasury. Before the pandemic, rideshare companies were selling 750,000 rides a day in New York City. So a union could get as much as $75,000 per day, almost $27.5 million a year, from the city alone.

But a closer look at the New York legislation’s reveals problematic elements, recognized by the AFL-CIO leadership in Washington, who oppose the legislation, and most other unions. Labor experts in academia, meanwhile, have issued a set of sectoral bargaining principles antithetical to the New York proposal.

It’s not hard to see why. Uber, Lyft, and gig delivery companies are all behind the New York gambit because it would legitimize the idea that their employees are “independent contractors,” which is essential to the success of their entire business model.

In California, these companies also tried to enlist a slice of the union movement behind an effort to classify their workers as something other than traditional employees. When that failed and the California legislature passed a law that unequivocally defined most gig workers as employees, Uber, Lyft, DoorDash, and other gig platforms spent $220 million to fund a referendum excluding their employees from the labor law protections in existence for many decades. The New York legislation would do the same thing, and with the concurrence of even a few unions, it would offer this erosion of labor standards powerful political backing.

The New York legislation is diabolical. It bans strikes, boycotts, and picketing. It locks in a five-year contract and creates a union which is not financially accountable to its members. And it bans local governments from passing ordinances to rein in gig employers; thus New York City could no longer put a cap on the number of rideshare drivers — there are around eighty thousand in the city today — or create other rules on how these companies must operate.

Were such a law to pass, Uber and other companies could throw minimum wage and health and safety protections for millions of workers under the bus, putting a giant brake on any Biden administration effort to insure more security and dignity for American workers.

These gig platforms are simply not viable unless they can create a vast pool of drivers and other contingent workers who themselves bear virtually all the risks — from accidents to slack sales — traditionally born by the employer itself.

Employees cost a business at least 30 percent more than contractors do. For years, Uber and Lyft secured billions in venture capital funding by arguing that the employment of their many thousands of drivers was just a stop gap until a fully automated, driverless car came on line. But that fairy tale has imploded, with both companies selling off their autonomous vehicle subsidiaries.

Now all these rideshare companies have left is a relentless drive to cut driver pay, raise fares, and increase wait times, a combination increasingly evident in most major urban areas.

A much more hopeful prospect is on offer in California. The effort to reverse Proposition 22 remains on hold, but that has not stopped a set of progressive legislators and unions from putting forward legislation that would create truly progressive, democratic sectoral bargaining initiatives on a statewide level.

The most important of them would establish a statewide “Fast Food Sector Council,” which would bring together representatives of workers, employers, and public sector regulators to make recommendations on minimum compensation, safety, scheduling stability, and training standards for that industry. Introduced by state assemblywoman Lorena Gonzalez, who also spearheaded the effort to rein in Uber and Lyft, the proposed law is called the FAST Recovery Act, designed to protect and increase wages and labor standards for five hundred thousand fast-food workers in the state.

In contrast to the New York initiative, this sectoral bargaining legislation maintains the employment status of fast food workers — they remain employees — while ending the “fissuring” of workplace responsibility that McDonald’s, Burger King, and other large corporations have foisted upon their franchisees. Thus, if a local fast-food franchise violates the law, so too does the corporate overlord.

If the supermajorities enjoyed by liberals in the California legislature make enactment of this law possible, the COVID-19 pandemic experience puts the moral and economic wind at their back. In scores of complaints filed with county health departments around California, fast-food workers have painted a grim picture of working conditions, with employers forcing workers to come to work sick, failing to enforce mask wearing, and retaliating when workers sought safer working conditions.

Meanwhile, in a carefully orchestrated legal strategy, the big fast-food corporations facilitated Paycheck Protection Program payments to their supposedly independent franchisees. More than 99 percent of McDonald’s restaurants in California received these COVID-19 relief funds, nearly a quarter billion nonrefundable dollars for their affiliates in the state.

Ironically, the progressive sectoral bargaining initiative in California does not make unionization an essential component of that effort to raise labor standards, while in New York, the recruitment of tens of thousands of gig workers into a “union” stands at the heart of the deal. It’s clear what is happening. California progressives recognize that actual organization of the low-wage, high-turnover service sector has been extremely difficult. It’s the first half of the slogan “Fight for $15 and a Union” that has become a reality in their state.

Like the progressives a century ago, they seek to build a more robust welfare state, targeted to specific industrial sectors and with as much worker voice as possible. Widespread unionism in the service sector — retail, fast food, and hospitality — might yet be possible, but it will not be the first thing on the agenda.

In New York, on the other hand, some opportunistic unions are willing to let Uber, Lyft, and their ilk set up company financed organizations to forestall genuine unionism and effective regulation of their industry by the state. This is a bargain not worth the thirty pieces of silver that’s on offer.

Nelson Lichtenstein is a professor of history at the University of California, Santa Barbara. He is the author of many books and is currently writing a history of economic policy during the Clinton years.