On Police Reform, the AFL-CIO Has a Lot of Catching Up to Do 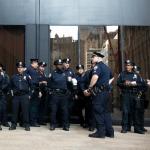 Society is at a crossroads. A simmering pot is boiling over. The system is festering and people in positions of power are standing idly by.

This is the picture the AFL-CIO paints in the introduction to the “Public Safety Blueprint for Change,” its new report on police reform. The report was written by the labor federation’s Task Force on Racial Justice, formed in July of 2020 as some of the largest protests in US history erupted in streets across the country following the murder of George Floyd by Minneapolis police officer Derek Chauvin.

Those streets included the one in downtown Washington, DC where the AFL-CIO’s headquarters is located — the building was set on fire. The incident prompted organized labor to try to clarify its position on policing.

The task force consists of thirteen unions that include police officer members, as well as the Teamsters and Service Employees International Union (SEIU), which while not part of the AFL-CIO, were invited to participate. It is led by United Steelworkers (USW) vice president Fred Raymond and AFL-CIO secretary treasurer Liz Shuler — the latter is a leading candidate to take over presidency of the federation when Richard Trumka steps down, though a challenge from AFA-CWA president Sara Nelson remains a possibility. As a note at the top of the report explains, it “is written by and from the perspective of unionized law enforcement officers and leaders, and endorsed by the participating unions and the AFL-CIO Task Force on Racial Justice.”

One of the unions participating in the task force is the International Union of Police Associations (IUPA), the only all-police union in the fifteen million–member strong AFL-CIO; police tend to prefer to organize independently, separating themselves from the labor movement in groupings such as police benevolent associations.

As In These Times’s Hamilton Nolan wrote of a leaked draft of the report, “The makeup of the committee therefore lends the imprimatur of the AFL-CIO’s top leadership to a group made up exclusively of those already obligated to represent police.”

After the scene-setting, the report gets to the point, which is to “build productive, positive and trusting community relationships, and to have the working union professionals who provide public safety daily be a driving force for meaningful reforms grounded in equity, inclusion and racial justice.” If it isn’t clear, these “union professionals” are cops, not the rest of the labor movement.

Toward this end, the task force offers recommendations. These include calls to increase diversity among officers, broaden training to address implicit bias and “cultural competency,” add resources to address cops’ mental health, and a “differential response model” (i.e., not sending police to situations an EMT can handle).

The cornerstone proposal is the Union Law Enforcement Accountability and Duty Standards (U-LEADS) program. This is a program “developed, owned and instituted by the union” — the police union — to “empower local union members to speak up and take action if fellow members are violating their professional oath or abusing their power,” with the aim of helping the union “weed out wrong-doers from union membership.” In short, “codes of excellence,” as the AFL-CIO’s Shuler suggested last year. How U-LEADS will overcome the infamous and well-established “blue wall of silence” inside police departments is not clear; the report offers few details.

There is little basis to presume that police departments would stick to such codes, or even do the minimum of merely saying they agree with them. Cops routinely get infuriated when anyone in organized labor — or outside of it for that matter — raises even the gentlest criticism of policing.

Trumka hasn’t wavered in rejecting calls to isolate police associations and kick them out of the AFL-CIO — which have come from several unions, including some inside the federation — yet within days of the federation releasing a statement on police violence last year, IUPA president Sam Cabral sent Trumka an outraged letter in which he describes complaints about police militarization and racial profiling as “ridiculous.”

This isn’t the first time this dynamic has played out. In 2014, shortly after Michael Brown’s murder, Cabral wrote Trumka to tell him to tone down his rhetoric. This followed Cabral defending programs that provide military-grade equipment to local police departments, which had come under criticism in response to the Ferguson Police Department’s brutal crackdown on protests. In that case, Trumka had signed onto a letter calling for a “federal czar” to oversee local police forces, a move by which Cabral couldn’t abide.

This is how police leadership views criticism. Police culture is at every level resistant to change: it’s not by chance that every internet forum for cops is full of extreme, racist sentiment. Indeed, police unions have long gone on the offensive and made gains at moments when criticism of the profession is loudest: officers spin that criticism as an attack, demanding more resources, more protections against repercussions for brutality or murder.

The AFL-CIO report’s introduction states that “there is broad agreement among organized labor that meaningful public safety reforms are needed,” but that isn’t true: that consensus stops at the door of your local police department. Police unions are busy backing a different type of reform: “Blue Lives Matter” bills, the so-called Law Enforcement Officers’ Bill of Rights they’ve pushed for years.

These bills cast cops as a protected class, criminalizing even the act of insulting a police officer and categorizing an attack on an officer as a federal hate crime. Codified in these reforms are measures such as mandatory waiting periods that prevent investigators from speaking to cops who shoot people for forty-eight hours.

All of which is to say that where the AFL-CIO report operates as if cops will go along with reform efforts, it is, at best, punting the question of how to resolve the contradictions that arise when, as my colleague once put it, we invite “agents of oppression into a movement founded on fighting it.” This obfuscation, verging on fantasy, is no surprise given these are police representatives tasked with coming up with a convincing vision of how to reform themselves, but it is nonetheless striking. It’s why the draft report didn’t even include the word “racism” (the final version does, speaking twice of “systemic racism”).

It’s also why the document rejects calls to defund the police. In what may be the year’s most memorable use of “actually,” the report states that “[t]he way to improve public safety systems and services actually requires greater investment.” Comparing policing to a contaminated water system, the argument reads as if it was produced in an alternate universe where no one ever noticed the deleterious, dangerous effects of ballooning police budgets and the funneling of military-grade weaponry to local police departments.

The AFL-CIO leadership continues to see police unions as not only an integral part of the labor movement, but as agents who should be invited to help shape whatever efforts to reduce police violence labor undertakes. That is a very different perspective from one in which it is other workers — the ones on the receiving end of traffic stops and police batons and bullets — that formulate solutions. Which side are you on, indeed.