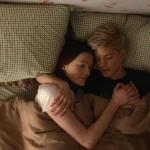 I devoured all six episodes of Feel Good (Netflix) in one evening, and much like the remarkable first season, it did not make me feel good, all the time, but it did make me feel as if I had been given a crash course in empathy and kindness. Co-created and co-written by comedian Mae Martin and the writer Joe Hampson, this is the semi-autobiographical story of Mae, a standup comedian who falls for the previously straight George (Charlotte Ritchie), replacing their other addictions with keen, occasionally obsessive love.

Channel 4 did not pick up this second season, but it is a relief that Netflix did. It goes further into the mire of trauma, while maintaining one of TV’s sweetest romantic storylines. After the end of season one, in which Mae unravelled, returned to old habits and imploded their relationship with George, there is an attempt at a reset. Mae is dropped off at rehab by their parents – Lisa Kudrow is a brilliant comic actor, and she is perfect here, as the brittle mother terrified of the past repeating itself. At the clinic, demons resurface, as does an old drug debt, in the form of a fellow patient with a good memory who likes to piss in the food.

If this all sounds bleak, well, it is and it isn’t. Largely, the show chooses humour over misery, hope over despair. It is sensitive and smart in its portrayal of PTSD, and deals in shades of grey, examining events with the kind of complexity that is often absent from public debate but is very much the bedrock of private discussions.

We are aware that something bad happened to Mae as a teenager, and this is gradually brought into focus, provoking the question of what does it mean to be a good person, or an awful person, and whether there is any such thing as either. There is a smaller storyline, simmering in the background, about Mae starting to recognise their non-binary identity, but much of this is about questioning binaries in all situations that do not require them.

There is an emotional heft, but almost every time Feel Good approaches earnestness, it swerves off. Mae’s standup act went viral in the first season, and has now brought circling vultures, specifically an opportunistic agent, Donna, who sees the mainstream potential in Mae as a marketable “lonely millennial”. “You’re an addict, you’re anxious, you’re trans,” she practically drools (“Am I?” says Mae, baffled). Donna pushes Mae to expose a fellow comic’s misdeeds, live on television, on an inane panel show. Would this be triumphant, or a disaster? Right, or wrong? The lines are blurred.

Unsurprisingly, Mae is finding it tough to tap into the kind of standup that won them a following last season. “Do you want to talk about my personal despair?” gets a rousing cheer, while an apocalyptic monologue about a bad hotdog gets them booted off the bill.

But if Mae is struggling to find anything funny, Feel Good viewers will have plenty to choose from. The nightmarish prospect of being stuck in an ancient Egypt-themed escape room with your ex plays out to predictable bedlam. Mae’s parents are extraordinarily deadpan and Kudrow is a treat. Rehab is a chaotic bust. Mae has a number of nicknames, many self-inflicted, from Peewee to Adam Driver, from John Wick to Little Piss Rat and Your Majesty. There are brief sexual role plays that exist only as short punchlines, but steal an entire episode.

Both George and flatmate Phil are given far more depth this season, and Phil even gets a trip to Canada. As George, Ritchie yet again proves that she is one of the most skilled actors in British comedy, and her scenes with her reckless father, played by Anthony Head, are wonderful. As Mae has to figure out what is holding them back, so George has to work out what she wants from life and love on her own terms. At work, she meets Elliott (Jordan Stephens), “a bi poly cis man” who prides himself on his emotional literacy, and who takes a shine to her but is mortified by what she actually wants him to do. “George! Where did you learn to normalise that aggressive language?” he chides, before handing her an anthology of feminist essays on sexuality. She starts to pay more attention to her teaching job, and gets interested in saving bees. If Mae is addicted to love, then George is addicted to Mae, and both must work out how to break old habits.

Martin and Hampson have made a delicate comedy and a tender love story, grafting both on to an undercurrent of pain, without ever being maudlin about it. Feel Good is a beautiful achievement, kind, human, as clever as it is funny.