The Backlash Against 'In the Heights' Explained 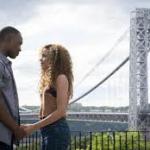 Despite an early onslaught of critical praise, the highly anticipated film adaptation of Lin-Manuel Miranda’s first Broadway musical In the Heights failed to draw crowds to movie theaters over its premiere weekend. Instead, a wave of backlash surfaced over the film’s lack of visibly dark-skinned Afro Latinx characters — the very community the film purports to represent.

The Tony-winning hit musical that made Lin-Manuel Miranda a Broadway name half a decade before Hamilton debuted depicts a struggling but vibrant neighborhood on Manhattan’s upper Upper West Side. But while the new film is a celebration of Washington Heights, it’s very easy to come away from it thinking that the community is entirely made up of mostly light-skinned Latinx migrants and immigrants. Though a large portion of the neighborhood’s real-life population is Black Latinx, in the movie, all but one of the main cast members are light-skinned — and many viewers immediately noticed what seemed to be the erasure of the Black Latinx community.

Discussion on social media about the film quickly focused on its perceived colorism — prejudice against darker-skinned Black people and positive bias toward those who are lighter-skinned. Conversation centered on an interview released June 9 between the film’s director, Jon M. Chu (Crazy Rich Asians), and the Root’s Felice León, in which she asked a clearly unprepared Chu, “What are your thoughts on the lack of Black Latinx people represented in your film?”

“That was something that we talked about and that I needed to be educated about,” Chu acknowledged. “In the end, when we were looking at the cast, we tried to get the people who were best for those roles.”

According to cast member Melissa Barrera in a separate group interview with the Root and a few of her fellow cast members, the audition process did include “a lot of Afro Latinos” — which raised questions about why none of “the right people for the roles,” as she put it, happened to be darker-skinned. Roles for Black actors mainly went to background dancers and extras.

In response to the backlash, Miranda posted a statement to Twitter Monday night to apologize for the film’s erasure of Washington Heights’ Black Latinx population. “I can hear the hurt and frustration over colorism, of feeling unseen in the feedback,” he wrote. “In trying to paint a mosaic of this community, we fell short. I’m truly sorry ... I promise to do better in my future projects, and I’m dedicated to the learning and evolving we all have to do to make sure we are honoring our diverse and vibrant community.”

In the Heights is vibrant, but is it authentic?

Although In the Heights is semi-autobiographical, Miranda didn’t actually grow up in Washington Heights; he spent most of his early life in the adjacent neighborhood of Inwood, experiencing Washington Heights as a frequent visitor but not really an inhabitant.

That difference may have eventually registered to some of the movie’s audience as inauthenticity. On June 13, a viral Twitter thread from filmmaker Numa Perrier (Jezebel) in which Perrier reposted the Root interview, describing the conversation as “painful,” sparked discussion from author Roxane Gay and some Black Latinx viewers about colorism. Colorism has long been an issue for Black Latinx community members who say they all too frequently get erased in depictions of Latinx communities, especially Caribbean cultures.

“These discussions are ones we end up having to have because there’s such an atmosphere of scarcity when it comes to these stories,” culture critic Soraya McDonald told me. “If there were multiple tentpoles starring and directed by people of color, and it didn’t feel like such a big deal and such an event, then it wouldn’t matter as much.”

Miranda has faced backlash over perceived Black erasure before, particularly during debates over whether Hamilton, despite having a mainly Black cast, erases Black people from America’s historical narrative. It might be easy to attribute the issue of In the Heights’ predominantly light-skinned casting to the way the Broadway show’s story was originally written by Miranda and Quiara Alegría Hudes (who also co-authored the movie script). But it’s important to note that as director, Chu also faced a similar backlash in 2018 over how Crazy Rich Asians, about affluent Chinese diaspora communities living in Singapore, all but erased the Malay, Indian, or other ethnic populations from its depiction of the island.

Given that this isn’t Chu’s first time being confronted with the question of colorism, then, his lack of a real answer when León pressed for one was baffling. Instead, he said repeatedly, “That’s a good conversation to have” — but didn’t appear to actually have it.

“Everyone talks about the need to have ‘difficult conversations’ about race, systemic racism, racial and cultural representation, and then as soon as it feels slightly difficult, folks who have the option to opt out, opt out,” Rebecca Carroll told me. A culture critic and author of Surviving the White Gaze: A Memoir, Carroll says she felt the casting for In the Heights couldn’t have been entirely unconscious. “How can it be, given what’s going on in the national dialogue?”

She referred to Miranda’s admission earlier this year that the film’s producers originally thought the movie would have to star Jennifer Lopez to be successful as evidence that “this movie was going to be financed for a cast of light-skinned Latinos only.” (Lopez’s ex-husband, powerhouse Latin musician Marc Anthony, has a small but pivotal role in the film and appears on the soundtrack, arguably bolstering the film’s appeal to many Latinx viewers.) According to Miranda, the creative team pushed back against that impulse until they got executives to understand that the movie had to feel authentic. “It has to be people who look like they belong on 175th Street,” he told IndieWire.

But Carroll doubts authenticity was the whole objective. “I simply don’t believe that Jon Chu was not cognizant of the casting choices,” Carroll said. “I don’t think the creative team could have considered the Black audience reaction and still make the film they did.”

McDonald told me she kept thinking back to the title of Ava DuVernay’s When They See Us as a reminder of how seldom Black people are seen. “Did you just not see these people? Did they just fade into fuzzy background? How do you not notice? But there are so many ways that people just don’t see Black people. They don’t consider us.”

Colorism has deep roots in the United States. The “paper bag test” (to ensure skin color was whiter than a paper bag) or the “blue vein society” (limited to people who could see their blue veins through light skin) were historical apocryphal examples of this discrimination, dating back to slavery and playing out within complex social castes. Today, colorism still visibly impacts Black representation onscreen. “The paper-bag test is still very much alive and kicking,” Oscar-winning actress Viola Davis said in 2015. “I hear these stories from friends of mine who are dark-skin actresses who are always being seen as crack addicts and prostitutes.”

During their interviews with the Root, instead of addressing In the Heights’ lack of Black leads, both Barrera and Chu brought up the movie’s background dancers as an example of Black Latinx representation. Given that the dancers are rarely seen onscreen and never have spoken lines, trying to hold them up as meaningful representation rather than set dressing may have driven the colorism point home: As McDonald said to me, “Black people are not visual furniture.”

Black actors have been used as window dressing for white stories in Hollywood for decades — think of “white savior” narratives like To Kill a Mockingbird or The Help, where racism is framed as a white person’s educational experience; or movies like The African Queen or Out of Africa, where the entire continent plays second fiddle to a white person’s adventures. And even though Hollywood is diversifying, racist casting patterns continue to play out, as lighter-skinned actors are cast more frequently than darker-skinned ones. One study conducted in 2019 and released in 2021 found that, of Black women cast in leading roles within the past decade, only 19 percent had dark skin.

That framework ultimately reinforces a lens of white privilege and maintains an inequitable view of the world that simultaneously fails to challenge audiences to see things any differently. “Here’s where the damage hits the hardest,” Carroll told me. “For the folks who may not even notice the erasure — white audiences — their willful ignorance is not merely validated but cemented. For the people who see the Black background dancers as sufficient representation and/or progress, that remains progress. And for those of us who find the erasure absolutely glaring, we have to start all over again with why it matters.”

All of this may make In the Heights a bittersweet film in the end — a reminder that when there’s so little representation to be had, the stakes become high for everyone potentially impacted by that representation. In the Heights has won praise for its loving depiction of a Latinx diaspora experience, particularly in songs like “Paciencia y Fe,” which depicts the struggle of immigrant and migrant workers arriving in New York, battling racism and economic hardship and the pain of struggling to fit in. While the story of In the Heights holds great meaning for many of its viewers, however, widespread recognition of the film’s flaws might ultimately overshadow its better efforts.

“I’m trying to hold space for both incredible pride in the movie we made,” Miranda wrote in his apology, “and be accountable for our shortcomings.” Hopefully, Hollywood will take note.