The Organic Intellectuals in China 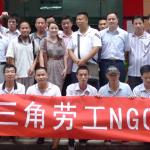 China has grown significantly in terms of economics and influence in international politics, igniting new debates about whether it has become hegemonic in the global economy. However, attempts to understand the hegemonic capacity of the Chinese party-state at the national level have not been fully theorized.

A Gramscian approach adds to our knowledge of China’s economic reform, the current socio-political development, and counter-hegemonic resistance. In my book and article, I explain that the economic reform, started in 1978 under the leadership of Deng Xiaoping and Jiang Zemin, was a passive revolution – the top-down introduction of capitalism by force. Through coercion, the party-state vigorously laid down the prerequisite conditions for capital accumulation: the making of the capital and exploited classes, the creation of the market economy and the labor market, the commodification of labor power, the implementation of the labor contract system and mechanisms for capitalist wage setting.

After carrying out capitalist economic reforms for over four decades, capitalism, with its associated capitalist and working classes, has become entrenched in China. This has shifted the ways in which the party-state governs.

Since the Hu-wen administration (2003-2013), the party-state has deployed less coercive tactics to mediate capital-labor relations. It has increasingly assisted the capitalist class in establishing hegemony over the working class (i.e. the capitalist class’s ideological ascendency and workers’ consent to its leadership). As a result, without the party-state waving its whip, many workers have inherited and approved pro-capitalist commonsense and values. When workers raise criticism of the new economic system, it is often articulated within the capitalist framework and does not break with capitalist logic.

That being said, some segments of the working class have overcome capitalist hegemony and actively challenge the values and ideas promulgated by the ruling class. This type of worker has demonstrated a high level of class consciousness, and is willing to carry out collective actions that challenge socioeconomic injustice, and protest against the state and capitalist power in China.

Against this broad economic and political context, many labor organizations seeking to help workers have emerged in China. They typically provided legal consultation and labor law education and organize focus-groups on specific policies and laws. Some of them also assist workers with extra-union strikes and collective bargaining.

In a recent article, I explain that these labor groups can be thought of as the organic intellectuals, semi-organic intellectuals, and unqualified organic intellectuals of the working class. This classification hinges on their commitment and ability to 1) challenge the common sense associated with capitalist economic relations, 2) challenge the juridico-political common sense the state reproduces, 3) construct a good sense and enhance workers’ class consciousness and political consciousness, and 4) build up workers’ collectivity, spur workers to take concerted actions and engage in system-transforming initiatives.

Some labor groups serve as semi-organic intellectuals. They help workers win one-off material gains and strengthen their organization in some cases, but they do not inspire workers to overcome the kind of common sense associated with the capitalist economic system (such as the idea of the “free market”) and the juridico-political system (such as rights defense according to the law). They fail to help workers construct alternative worldviews that induce the latter’s resistance against the economic and juridico-political systems.

In 2017, the government enacted the Law on the Management of Foreign Non-Government Organizations Activities, which aims to restrict the financial income of labor and social groups. Additionally, the Xi regime has intensified its repression of labor groups. In 2015, after arresting 5 feminist activists and over 200 rights lawyers and legal assistants, 7 labor organization activists from Guangdong were arrested in December. In 2018, the government repressed the Jasic workers’ endeavor to build a workplace union, arresting the worker leaders and over 50 supporters. In 2019, five labor activists were arrested. At the end of 2019 and in early 2020, a labor activist and two volunteers running a website to advocate for the rights of sanitation workers in Guangzhou were detained for 15 days.

Xi’s suppressive attitudes toward labor groups and workers has paradoxically weakened the foundation of hegemony emergent in China. As explained by Gramsci, civil society institutions, such as schools, churches, media, trade unions, political parties and social groups are vehicles through which the ruling bloc organizes its hegemonic power. Contrary to what authoritarian leaders would think, tolerance of labor groups and other civil society organizations would not necessarily endanger political and economic stability. The existence of civil society in fact may help consolidate capitalist hegemony.

On the surface, suppressing labor groups may stop them from playing the role of organic and semi-organic intellectuals. However, it also means that the material discontent of workers could not be ameliorated through labor groups supporting workers’ actions (nor by trade unions that are controlled by the party-state and employers). Workers’ discontent could easily be transformed into distrust of, and eventually opposition to, the leadership of the ruling class. The emergent hegemony in China, appears to be grounded in a weak foundation.

Elaine Sio-ieng Hui is Assistant Professor of Labor and Employment Relations and Asian Studies at Penn State and author of the book Hegemonic Transformation: The State, Laws, and Labour Relations in Post-Socialist China.